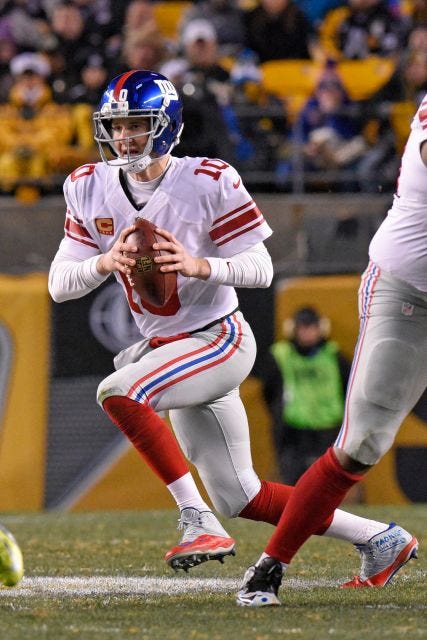 Well, Big Blue answered one question in positive fashion. A defensive unit that got a ton of hype pummeling a few cupcakes rose to the occasion against an elite Steelers offense. It wasn’t flawless. They let Ladarius Green go for 6/110/1 through less than 3 quarters (Collins was beaten badly on the score). Pittsburgh was able to convert some LONG third downs. Still, they kept the game within reach all day despite being on the field for 34 minutes. Vernon came through with another pair of sacks with relentless pressure, even after JPP went down with a groin injury. Eli Apple had his best game as a pro with some big tackles, pass breakups & a pair of takeaways. They’re legit.

I said in my pregame blog though that the Giants best defense today would be a good offense. They didn’t even come close. On their second drive of the game, a pair of questionable flags led to a Pittsburgh safety to open the scoring. Their next drive (probably the best of the day) went for almost 7 minutes before Eli threw his first INT inside the 10. I don’t know how he didn’t see Timmons on that play but he gave it right to him. Next possession was a 3-and-out after Eli spiked a short pass that would’ve been an easy first.

The G-Men started the second half with another 3-and-out, then drove to the 3 after great field position only to stall on 4th down. They were able to take advantage of Apple’s fumble recovery at the Steelers’ 17, but their next 3 possessions were 3-and-out, INT & sack on 4th down. Whether it was play-calling, Flowers holding or Eli flat out sucking the Giants offense couldn’t create for themselves. When the defense handed them opportunity after opportunity with short fields, it didn’t matter.

Opposing teams have kept Beckham from running wild & Eli Manning looks rattled for the first time in a long time. He’s always been a roller coaster but used to be unflappable. Now he’s lost composure. White-knuckling a lot of makeable throws & rushing when he’s actually got a chance to get set (like his second pick of the day). Thanks for the Super Bowls & all but the guy is simply playing awful. Worst part is they don’t even need him to be a hero. Just move the chains, let the D breathe & cash in chances deep in enemy territory. The Giants defense should still be enough to get this squad to 10 wins & playoffs. If there’s one reason Big Blue are about to embark on an improbable free fall though, it’s the same guy responsible for a pair of improbable trips to glory.