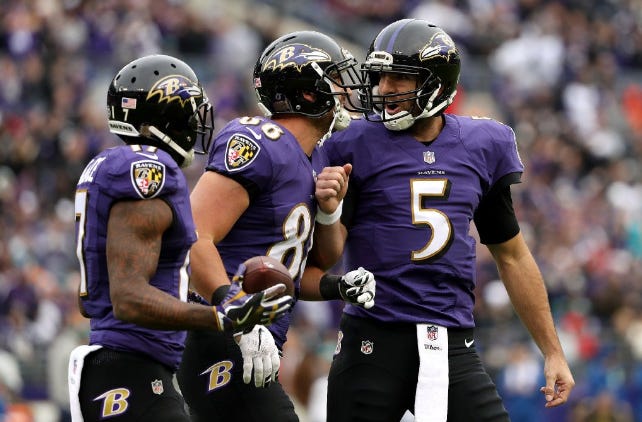 Wooooooooo blowout city baby! It’s about time. The Ravens came out from the first drive and completely dominated this game. Drove right down the field and hung 7 on the first drive and never looked back. Kept the foot on the gas throughout the first half and went into the half up 24-0. Curtains.

The Dolphins never stood a chance. They were completely exposed as the mediocre team they are. Complete dominance by the Ravens from beginning to end. If it wasn’t for a borderline fumble by Dennis Pitta, the Ravens defense would’ve pitched a shutout today. More impressive is the fact that the Ravens’ offense may have outplayed the defense. They finally put it all together for 4 quarters. It was surprising that they threw the ball as much as they did, but they obviously found success and stuck with it. Joe was magnificent. January Joe came early this season. 381 yards and 4 TD’s? He’s rounding into form at exactly the right time. Suddenly the Ravens look a lot more dangerous in an AFC that looks a bit more wide open than a couple weeks ago.

Big opportunity to make a statement on Monday Night Football in New England next week. The odds are against us, but that’s exactly how we like it in Foxboro. I’m too excited. We’ll get to that later, but for now go G-Men. Would love to go up a full game against the Steelers (plus the tiebreaker). Everything coming up Ravens, let’s goooooo!