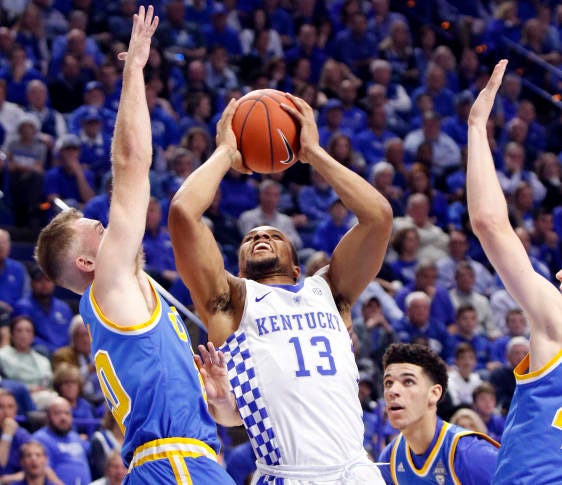 Well yesterday was an incredible day in college basketball. We had a lot of big time games and big time performances. Granted it’s still early in the season, there is plenty to take away from what we saw yesterday. Here’s what I took away from sitting on my couch for 12 hours yesterday.

– UCLA solidified itself as a Final Four team. They have six guys who can go get buckets, led by Lonzo Ball. He struggled yesterday in the first half, but in the second half showed why people consider him the best point guard in the country right now. Between Aaron Holliday, Isaac Hamilton, Bryce Alford, Ball, Thomas Welsh and TJ Leaf, you can’t just gameplan to take away one person.

– However, UCLA does need to get some sort of defense. Right now they can killed on the interior that we saw yesterday. They give up too much dribble penetration and need to set up some sort of zone or something to hide that deficiency.

– It’s good for college basketball that UCLA is a notable team. The sport is better when UCLA, Kentucky, Duke, UNC, Arizona, Georgetown, Villanova, Indiana and Louisville are all good.

– If you’re a Kentucky fan, I wouldn’t feel worried about the loss. There were a ton of missed easy shots, which you won’t see often. They had a chance to push the lead to close to 15-20 in the first half, but those missed shots cost them.

– I would worry about the production at the four spot though for Kentucky. If Gabriel struggles on the defensive side of the ball, it’s hard to see Kentucky being successful. Derek Willis is an awful defensive player and if Gabriel struggles, you see guys like TJ Leaf kill them.

– Duke got Jayson Tatum and Marques Bolden back yesterday. They are getting closer to being that scary good team everyone thought they would be before the season.

– Yeah, we may all want to start paying real attention to Baylor. They showed in a couple minute span just how dominant they can be. They were in a one point game with Xavier late in the second half, before winning by 15.

– Johnathan Motley might be the most impressive player this season in terms of progress. He was always a talented player, but this year it looks like it’s all put together. He’s a 6’10”, athletic player that can finish at the rim and rebound. He’s an All-American right now.

– Xavier getting Kaiser Gates back in the lineup makes them look more like a Final Four contender. There are rumors that Myles Davis will be coming back soon, which would fill out the Xavier roster and we’ll finally see them at full strength.

– What’s going on with Virginia? This is the second game in a row they struggled at home against a team they shouldn’t. The Cavs were unable to pull away from West Virginia, which resulted in the loss. Virginia needs London Perrantes to become more Monte Morris like in the sense of looking to be more aggressive.

– With the thought of the Big 12 being down this year, West Virginia and Baylor helped reverse the thought with those wins yesterday.

– Josh Hart? Yeah, my pick for National Player of the Year is making his case with a triple-double yesterday.

– Gonzaga is a Final Four caliber team. They dominated that game against Arizona and I love the balance and depth of that team. Nigel Williams-Goss was a McDonald’s All-American for a reason.

– Providence is going to be really good next year. The Friars got a home win against rival Rhode Island, but you can tell they are still a year away from being something special. I expect Providence to get a couple more nice wins this year, but also wouldn’t be shocked if they lose to St. John’s or DePaul.

– Melo Trimble has probably been the best player when there’s a minute left in the game. Last night he again gave Maryland the win as he hit two free throws with 10 seconds left. There is some luck here though. No, this isn’t me ‘hating’ Maryland, KenPom has them as the 3rd luckiest team in the country right now. They have to stop making runs late in the game.

– Wisconsin continues to figure shit out. After a 17-point win against Syracuse, I thought there would be some sort of let down against Oklahoma. There was in the first half, but Wisconsin dominated the second half because Nigel Hayes isn’t forcing stuff anymore. If they get him to play like he has the last two games, they will win the Big 10.

– Illinois (friend of the program) has put together back-to-back nice wins over NC State and VCU. If the Illini can stay healthy, they are looking more like a NCAA Tournament team. Malcolm Hill is the real deal.