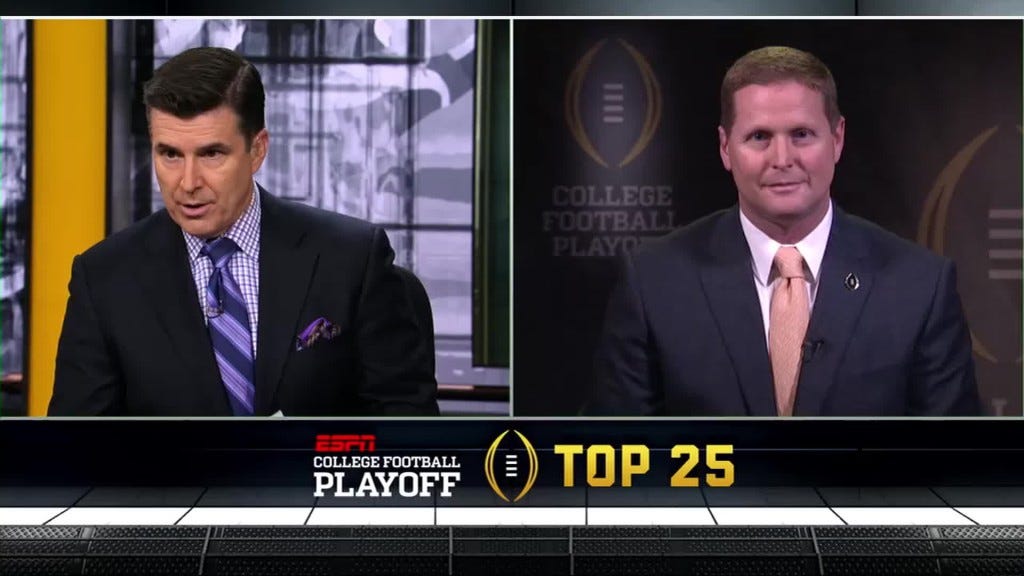 Watching Scott Van Pelt try and manage SportsCenter last night with everyone’s opinions was flat out hysterical. We had Booger McFadden (love that name), Jonathon Vilma, and Rece Davis giving their top four teams. Everyone has a different opinion, everyone can make a great case for their all important number four team. Should we penalize a team for their lack of a non-conference schedule? Looking at you Washington. If so, how does Oklahoma feel? They stacked their early schedule with Houston and Ohio State, both of their losses. Michigan beat both of the teams in the B10 Championship we just watched and took Ohio State to overtime on the road. That’s a pretty good resume, but they didn’t even get to the B10 Championship game. Washington’s only loss is to maybe the hottest team in the country USC. They won the PAC 12 Championship in blow out fashion over a very good Colorado team, but their non-conference schedule consisted of Rutgers, Idaho, and Portland State (yikes). Ohio State has the best resume of a team not named Alabama, but they didn’t get to the B10 Championship either. Penn State just won the Big Ten in spectacular fashion, beat Ohio State, and rattled off nine straight wins to end the year, but they were blown out by Michigan. My point? EVERYONE has a legitimate case to be that number four team in the playoff. This is fun, and it’s what the committee was put together to do. It’s why we eliminated the BCS Standings from picking two teams based off analytics. It’s so these people can sit in a room and go back and forth about who deserves to get in. The first two years of this there weren’t any controversies about who got left out. The final four seemed to round itself out for the committee to make their easy non-controversial decision. Finally, we have a legitimate debate and multiple teams are going to be upset about the final result. I’m no expert by any means (I mean I’m the guy who fell in love with Louisville a few weeks back) but I’ll do my best to pretend I’m on the committee for a minute and give you my final four. Let’s quickly break down each team’s argument.

First and foremost the top three teams will be Alabama, Ohio State, and Clemson. You can argue who deserves to be 2 and 3 for sure, but those will be the top three teams. Some people like Jonathon Vilma think Ohio State shouldn’t get in and that’s just dumb. Their resume and analytical numbers speak for themselves. Plus, the committee is in love with them, at least based on what chairman Kirby Hocutt has said in every interview the past few weeks. Wonder if Kirby played us this whole time? Imagine he announces it tomorrow and just goes double middle finger to everyone with USC in. That’s some Vince McMahon type shit that we need.

The Good: The Huskies are your 2016 PAC 12 Champion. Their only loss comes to USC a few weeks ago, and many agree USC was the hottest team coming down the stretch in the entire country. UW beat Stanford in blow out fashion when the Cardinal were ranked 7th in the country. The Huskies went on the road and beat 17 Utah in the last minute. To get to the PAC 12 title game they went into Washington State for the Apple Cup and destroyed the Cougars. And finally in the PAC 12 title game on Friday, Washington demolished a very good top-ten Colorado team. What’s not to like?

The Bad: Doubters look at their lack of a non-conference schedule and dismiss Washington. I don’t blame them, when you schedule Rutgers, Idaho, and Portland State (13-22 combined record) it’s not a great look for your resume. People say the PAC 12 isn’t a good conference compared to the Big Ten, SEC, or Big 12. I disagree here as the PAC 12 has five currently ranked teams with three in the top 11. Sure, Oregon had a very down year, but overall the conference was pretty solid.

The Good: Michigan beat both of the teams in the B10 Championship last night. In fact, they destroyed Penn State by 39 points. In their non-conference schedule they beat Colorado by 17 points, before anyone knew how good the Buffaloes would get. They took Ohio State to overtime on the road in a game that could’ve gone either way based on a few calls here and there…or a spot.

The Bad: Michigan didn’t even get to their conference championship game. They’re a two-loss non-conference champion which doesn’t sound too impressive to the committee. Based off the eye test they’re a top four team when you watch them play and dominate their games, but it’s not enough to hop Washington and Penn State.

The Good: The Nittany Lions just came back from the dead against Wisconsin to win the Big Ten. They were given a .09% chance to win the conference championship after losing by 39 to Michigan earlier in the year. Since that point they’ve won nine straight games to get here. It’s about as improbable and impressive a run as you can get in the Big Ten. They deserve all the credit from haters like myself since now they’ve beaten the #2 and #6 teams in the current CFP rankings.

The Bad: People point to their blowout loss to Michigan in September as a big knocking point. The fact is the Nittany Lions were so decimated with injuries to their top-tier linebackers that they never stood a chance. There are no excuses in any games, but it does hold some water. Still, they only managed to score 10 points with a fully healthy offense, so they wouldn’t have won the game either way, but it wouldn’t have been by almost 40 points. The other knock on this team is the eye test. When you watch these guys play do they really look like one of the top four teams in the country. In the second half last night they did, but that’s about it. This take is purely subjective, but during their nine-game winning streak the Penn State beat Minnesota, Maryland, Purdue, Iowa, Indiana, Rutgers, and Michigan State. Those teams combined in-conference records are 20-43. So yes, they won nine straight with two of those wins against 6 Wisconsin and 2 Ohio State, but the other wins weren’t impressive. Also, if you go by the current rankings it’s hard for Penn State at 7 to hop all the way up to 4 over Washington who just dominated their conference championship. How do you explain to the Huskies that they got bumped down for winning the PAC 12 title by 31 points?

The Good: Oklahoma won the Big 12 title and didn’t drop a game in their conference schedule. They ended the year on a nine game winning streak with multiple Heisman candidates on their offense. They decided to stack their non-conference schedule with a road match up against Houston and a home clash against Ohio State.

The Bad: Oklahoma lost both of those tough non-conference games. If you’re not going to penalize Washington for their weak non-conference schedule, how can you fault Oklahoma for doing the opposite? If the Sooners win either of those games they’re absolutely in the final four and we aren’t having this discussion most likely. They aren’t getting in, but they’re worth bringing up because they are the one team here that stacked their early season opponents and will be on the outside looking in because of it. Something to consider for future teams. 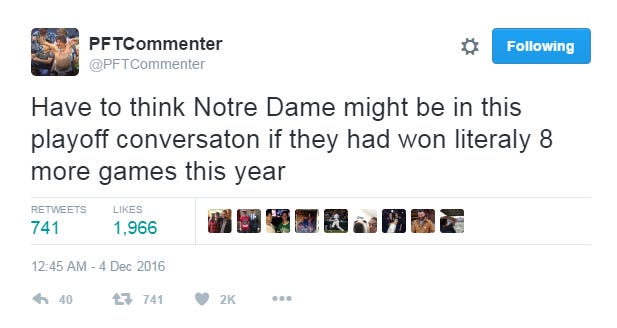 I think it’s tough to unseat Washington at #4 after all they did was dominate their conference championship game. When you stack up their resume with Penn State you could argue each way and give very convincing points to both teams. But based on what the committee has said in the past and where they currently have these guys ranked I cannot see them screwing Washington after a 31 point win over a top-ten team.

My Address To Penn State Nation

Listen, I was a Penn State hater all year and I’ll continue to be for however long time goes on. 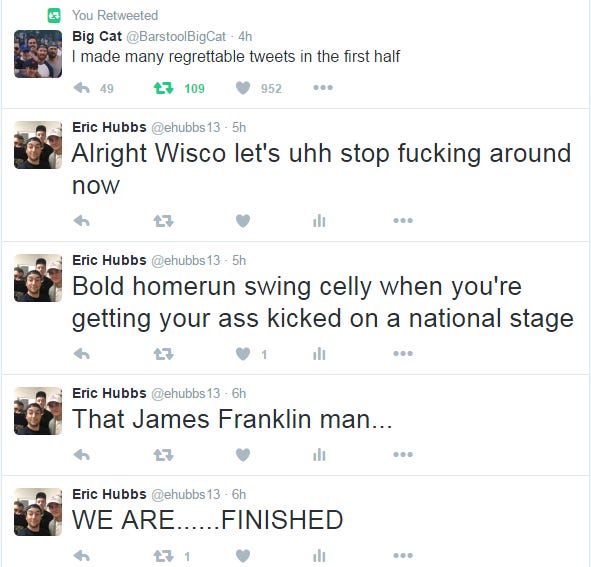 You guys are a fucking cult and insufferable to listen to, but you got a really good football team there is no denying that. I didn’t think you were a top four team and I still don’t, but that’s not to say how impressed I am. Your receivers go up and get the ball maybe better than any receiving core in the country. McSorley throws the deep ball maybe better than anyone in college football. Barkley will be the best running back in the country next year and you should be very excited he has to come back because he’s only a sophomore. And the defense is a flat-out wall, with linebackers coming off an assembly line that just dominate. Obviously you want to get in and continue to prove everyone wrong, but you would be better off getting into the Rose Bowl. Let’s face it, no one is beating Alabama. What they did to Florida this weekend showed you how dominate their entire defense is. They said during the telecast that they have SIX FIRST ROUND PICKS. That’s so FUCKING ridiculous I can’t even describe it, so I’ll just curse and use all-caps like a real adult. Do you REALLY want to do this? Yeah you sneaked by Ohio State and you beat Wisconsin, but Bama is another animal. It’s not the way you want to end your season. You want to get first downs. You want to move the ball passed the 50 yard line. You want touchdowns. Bama doesn’t let that happen. They make you never want to play football again. Now you obviously want that honor of getting into the playoff and be one of those teams I GET IT. But, if you don’t get in, playing in the Rose Bowl with a legit chance to end your year on a 10 game winning streak isn’t a bad consolation prize. You also get every right to complain and say you got screwed over by the committee until we do this all again next year.

This isn’t the worst idea

Louisville didn’t really pan out as the biggest threat to Bama did they? I’ll raise my hand on that one, that’s on me. Goddamit Lamar