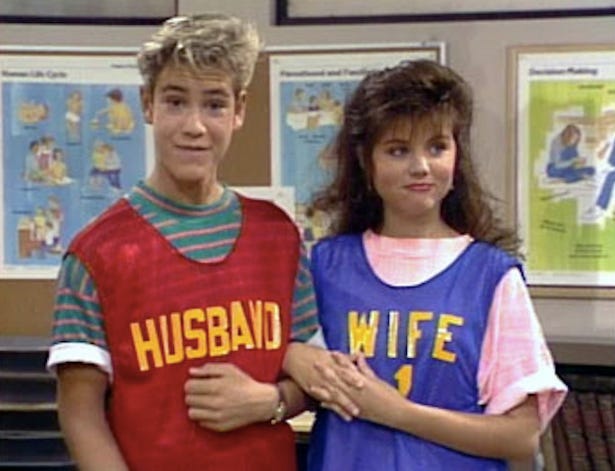 (Source) — From school bells, to wedding bells — to divorce lawyers? It seems Saved by the Bell sweethearts Zack and Kelly didn’t last the long haul. Despite the best wedding possible set in Las Vegas, the on-again, off-again romance between Zack Morris (Mark-Paul Gosselaar) and Kelly Kapowski (Tiffani Thiessen) wasn’t destined to last, according to executive producer Peter Engel, which begs the question: Would they still be married now? “Probably not,” said Engel in an interview with TVLine. “Well, they’d be married — but not to each other.” Even with their stories ended by a two-hour TV movie in 1994, the couple would have to experience happily ever after with someone else.

Who does this Peter Engel motherfucker think he is? Zach and Kelly would be divorced? Zach and Kelly? Yeah, ok pal. Look, I know the statistics. I know like 6 out of 10 marriages end in divorce, I’ve heard the Brad Paisley song “If Love Was A Plane.” However, there are two couples that statistics absolutely do not apply to and that’s Zach Morris and Kelly Kaposki, and my mom and dad. That’s it. Those two coups (short for couples) will be in love forever and ever and ever and there’s no point in saying otherwise.

Seriously, who pissed in Peter’s Cheerios yesterday and made him say this shit? Dude, just let us have our dream. I don’t need the real life tale where Zach missed being the king of Bayside and became an alcoholic and beat Kelly, just tell me they lived happily ever after. What’s next, Pete? You gonna tell me that Snow White never actually woke up so that was a bit of a rape and Jasmine cheated with some dude in ISIS? That’s nonsense. Let fairy tales remain fairy tales, real life is plenty fucked up enough.