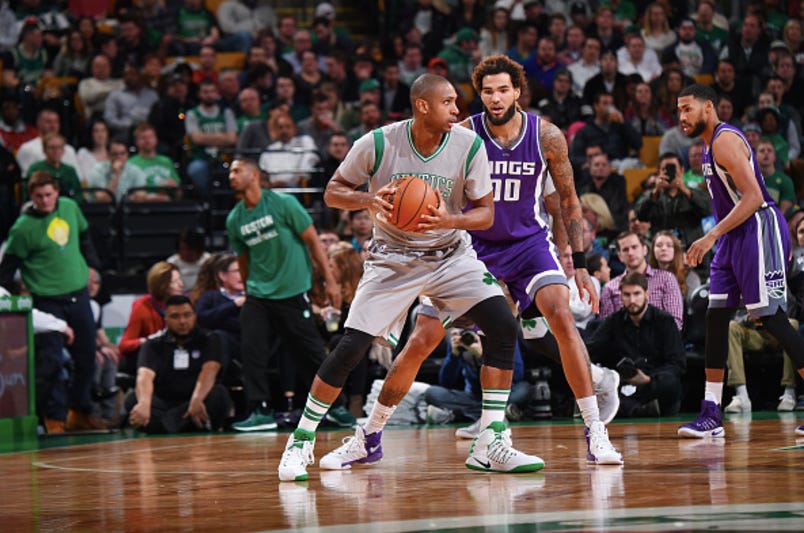 After dropping a very winnable game against the Pistons, I don’t want to be overly dramatic and say that last night’s game against SAC was a must win, but it was basically a must win. Given the caliber of teams in the Celtics immediate future, they needed to take care of another game at home in which they were favored. Well, not only did the Celts take care of business, but we were also treated to a performance not seen before in the history of the NBA. That’s pretty cool.

Last night was also a chance for us to see Boogie Cousins in person, or as I like to call him, my personal white whale. If I learned anything from this game it’s that I need Boogie Cousins in my life more than I need almost anything. When Boogie is locked in, he is practically unstoppable.

What had the looks of another frustrating game early, turned out to be a valuable win for a number of reasons. Let’s talk about em

– This might come as a surprise, but we’re starting with Al Horford. I mentioned we saw something special, something that no player in the history of the league has ever done. Well, a 26 point, 8 rebound, 3 assist, 6 block, 2 steal performance with four made threes was that something. When I heard of the Horford signing in July and I would lay in bed at night, these were the performances that I dreamed of. Absolutely everything about Horford’s night was exactly why I’ve always stood by his max money. I’m not sure what else you could want the guy to do.

The most impressive part of his night, is he absolutely owned Boogie on both ends. The offense didn’t really surprise me, we all knew Horford could score from a variety of spots on the floor. What surprised me is the six blocks. Six!! Al Horford is your NBA leader in blocks per game. Listen I drink the Kool Aid with the best of em, but not even I could predict this sort of effort to start the year in terms of protecting the rim.

It was also nice to see Horford have such a huge impact in the fourth quarter when it was needed most. His 10 points (including a couple threes) and three blocks helped seal the deal, and while it’s unfair to expect this type of performance from him every night, you can’t help but be pleased with how Horford’s Celtics career has started. Last night was just another building block, but it was beautiful. Enjoy

A total of 25 assists on 36 baskets, that’s good for an assist% of 69%. Despite the shooting taking a massive dive as the game went on, when the Celtics did score, they did it the right way. Loved everything about how the Celtics passed the ball in this game. Five players with at least three assists is going to win you more games than not.

– The Celtics will always fall in love with the three, it happened again in this game, but what impressed me was for the most part they were smart about their attempts. I counted only one or two “bad” threes, and honestly I was most proud with Jae Crowder’s decision making. Everyone knows he sees one three go down, and the next thing you know he’s passing up better shots just to take a three. I’m happy to report his decision making was much better in this game. He was more aggressive than we’ve seen from him in the past, and the first instance stood out to me midway through the first quarter.

He could have easily taken that three. The Celtics were hot from the outside, and we’ve seen Crowder in this situation before attempt to deliver a knock out three. Instead, he gives a simple pump fake and takes a higher percentage shot, which he of course made. Great decision making and he did it a few more times to boot.

I also get the feeling that Crowder is truly feeling good with his ankle because we were treated with the patented hard right hand drive. I absolutely love when Crowder gets his running start on this move, you cannot keep him from getting to the rim when he does it

Crowder continues to shoot the ball well (50/60% splits), and now that his minute restrictions are off, it’s no surprise that he played the most minutes of any Celtic last night. Feels great to have our big impact player back.

– Life is crazy when Isaiah throws up a 20/7 with 1 turnover and really he didn’t even play that well. As he is prone to do Isaiah did Isaiah things, absolutely destroyed Boogie whenever they switched on a P&R, and with the game in the balance in the fourth quarter, Isaiah came in with around 8 minutes left and helped close the door with 7/3 down the stretch. He even continued his good recent play on the defensive end with a couple big steals. Nights like this are important because it showed the Celts can still win games without Isaiah going absolutely crazy and putting up 27+. That’s big,

– Speaking of defense, I’m ready to say a large reason this game turned out the way it did was because of the defense Terry Rozier played in the fourth quarter. Offensively he was a train wreck, but that’s the thing with these guards, they just keep coming. When Brad took him out for Isaiah in the fourth he gave held him on the sideline for a split second where I’m confident he let Terry know how big his shift was. This role is new for Rozier, so the fact that he is making an impact on the defensive end is a positive takeaway.

– They didn’t blow this game. After their huge early lead, this was pretty much a tight contest for 3.5 quarters, one that we’ve seen the Celts blow time and time again. Sometimes wins like this, while against a bad team, still can mean a lot in terms of momentum moving forward. Had they lost this game, moral would have been brutal heading into tonight’s game in Philly.

– Ho hum just another 9 rebounds for Avery Bradley. He is going to lead this team in rebounding and it’ll probably be at over eight a game. That is so ridiculous I almost can’t believe I typed it.

– Look, there’s no way to sugarcoat it. This second unit was absolutely horrific. Insert Tyler Zeller & Co and poof, there went your big early first quarter lead. As a bench unit, the Celtics only got 12 points from their reserves, and guys like Marcus/Jaylen/Zeller had brutal +/-‘s. In my opinion the Celts were lucky in this game, because without their second unit giving them actual positive production, they are not going to beat many teams. There’s a reason why Brad went small with that second unit after that first quarter, and I can’t say that reason makes me happy.

– Terry Rozier hates 2 for 1’s. Hates them and he refuses to allow the Celtics to run them when he is on the court in a 2 for 1 situation. He may not know what they are or how to achieve them, but he needs to learn quick.

– Matt Barnes is your winner of the Shitty Player Who’s Shitty But Plays The Celtics So He Isn’t Shutty aAward. Allowing that to happen was very frustrating

– Yup I hated Marcus’ end of shot clock desperation three and I blame Kelly. He held the ball for forever and he needs to just take the three himself

– What is the deal with these grey jerseys and why are we still trying to make them a thing. They are the very definition of awful and they make me irrationally angry. Get rid of them

– For all the good that Isaiah does he sure as shit won’t stop jumping to pass. There isn’t an uglier play on basketball than a PG getting stuck trying to pass while jumping

But hey, they won and I’ll take it. Not every win is going to be pretty and at least they held another team to under 100. Right back at it tonight in Philly, thankfully there should be no Embiid which you have to like since he’s incredible. Need these wins and the Celts know it, so hopefully they come to play. In the meantime spend the next few hours enjoying this one.