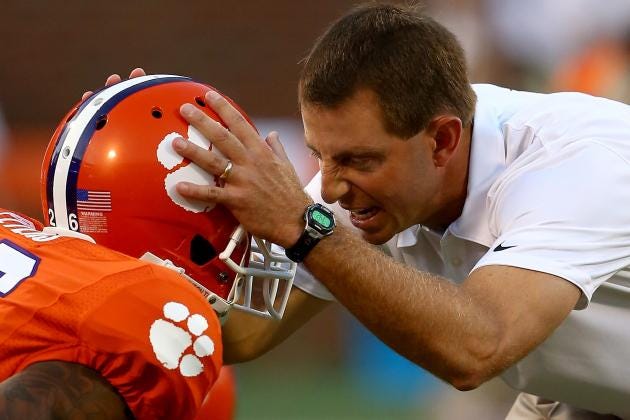 Win and they’re in. It’s as simple as that for the Clemson Tigers. What seed they will be probably depends on how well they perform in the event of a win. For Virginia Tech it’s all about being the spoiler. The 9-3 Hokies will obviously be in a bowl, and a win today could very well mean an Orange Bowl berth on New Year’s Day.

Clemson finished the regular season with their only blemish being a last minute home loss to Pittsburgh. That’s not to say all 11 wins were cake walks. You can compare the Tigers to last year’s Ohio State Buckeyes because of all the close calls they survived to get to this point. They barely held on to Louisville, stopping the Cardinals in the red zone as the final seconds trickled down. They were taken to overtime at home against NC State and were the beneficiaries of a few bad calls in their narrow three point victory against FSU. Clemson could very easily have 2-3 losses, but they found ways to win and are in a “control your own destiny” situation to get into the playoffs.

Virginia Tech has had an odd year to say the least. You would think a team that loses to Syracuse by 14 points wouldn’t wind up in the ACC Title Game. They somehow only managed to score 17 points against the vaunted Orange defense. The same defense that just gave up 76 points last week to Pitt. Oh yeah, Virginia Tech beat Pitt, and Pitt beat Clemson. College Football.

Clemson is led by Heisman candidate Deshaun Watson who has tossed 36 touchdowns on the year, but has a concerning 14 interceptions on the other hand. Watson comes off his best performance of the year, against South Carolina, where he threw for 347 yards at an 81% clip with 6 touchdowns. He brings that type of game into this one and the Hokies will wish they didn’t get off the bus. Virginia Tech has struggled against mobile quarterbacks this year, and while Deshaun hasn’t used his legs a ton this year, he may find it advantageous to take advantage of the Hokies’ weakness. Watson’s top target, Mike Williams, is in the discussion as the first receiver being selected in the Spring. Williams has over 1,100 yards and ten touchdowns this year after having to sit out the majority of last year due to a scary neck injury when he collided with the goal post. Clemson’s tailback Wayne Gallman is a deadly weapon on the ground where he’s totaled a career high 14 touchdowns in 2016. This offense has lots of firepower as you can see, but Watson has had his issues with the turning the ball over in the red zone.

Junior quarterback Jerod Evans is a very dangerous weapon for the Hokies on offense. He’s thrown for over 3,000 yards this with 26 touchdowns and only 5 interceptions, while also running for a team high 713 yards and eight more scores. Evans has all the talent to dominate any type of game so it should be interesting to see what he can do against a Tigers defense hes never faced before. Here’s a little preview of what he can do..

The Tigers defense boasted the best scoring defense in the ACC this year, giving up only 17 points per game. This did, however, give up 43 points to Pittsburgh so there are holes to be exploited. They’ll be wise to spy on Evans all night and eliminate his mobility.

Tech has the ability to turn you over, while Deshaun Watson has the tendency to be careless with the football in the red zone. This will be a key for the Hokies.

Dabo Swiney is a nut job and I may not like him because he comes off as an annoying twerp, but he’s a good fucking coach. He’ll have his boys ready to go for this one, and he’s done this before. Experience in these types of games are huge.

Clemson finds themselves in a bit of a shootout as both explosive offenses hit some big plays. I think Watson will be a picked off a few times, which is crucial if Tech is going to be in this game. They cannot win this game, or come close, unless their defense steps up big time in a few spots. In the end, I would take the points here as most people seem to be in on the Tigers as the favorite.