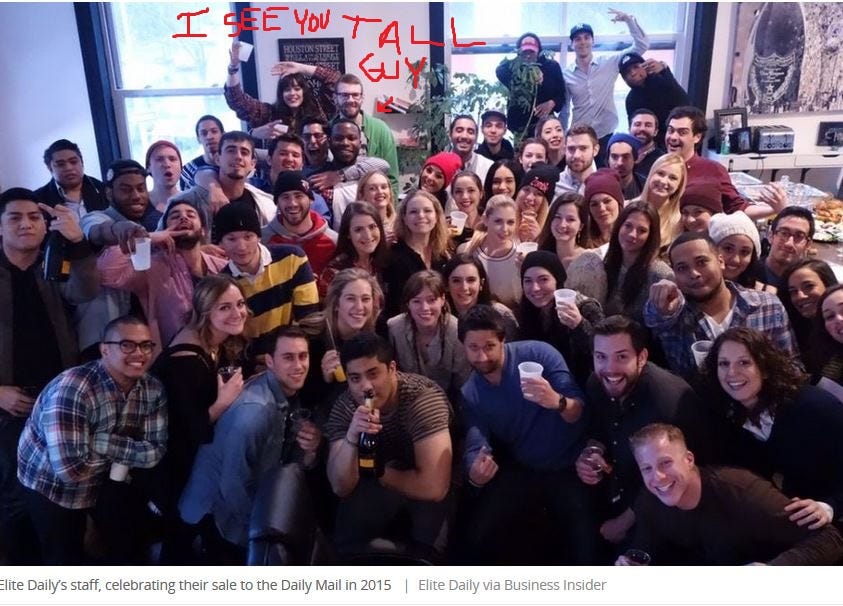 Recode – Elite Daily used to look like a digital publishing success story: Founded by a couple of twentysomethings in 2012, fueled by Facebook growth, then sold for many millions a few years later. Now it is a cautionary tale: The owner of the Daily Mail, the publisher that bought Elite Daily in January 2015, says the New York-based startup has been a bust, and has written down all of its investment in the money-losing company, citing “poor performance.” It is taking a $31 million loss in the process. Elite Daily was one of several companies that figured out how to tap into Facebook to supersize growth a few years ago, generating clicks with high-volume, low-brow, dude-friendly content.

Luckily I’m not the type of guy to say I told you because if I was right now would be the time I’d say I told you so. I’d be ranting and raving about how I laughed and laughed and laughed when I heard about this Elite Daily sale. I actually wrote a blog about it but the Devnest lost it in the rapture. I screamed from every mountain top that this was a fraud company built on smoke and mirrors and fancy pants facebook algorithms. That it was the opposite of Barstool. That while Barstool grew brick by brick and delivering newspapers, Elite Daily was the exact opposite. It had no real fans. It was all clickbait. They couldn’t sell a tshirt if their lives depended on it. It had zero influence.  That’s why when the Daily Mail deal was announced I swore that Barstool would have the last laugh. That we would be the last man standing. And once again I’ve been proven right as another competitor falls by the wayside. Listen it’s not that I hate Elite Daily.  I’m sure lots of people made lots of money from it. But houses that are built on toothpicks don’t last. You need the foundation that takes years to build.  That’s what Barstool has that NOBODY else has.  We have a decade of building the foundation.   A foundation that no hurricane or tornado can knock over. That’s why we last while so many others have failed.

Now somebody do me a favor and cue the music!