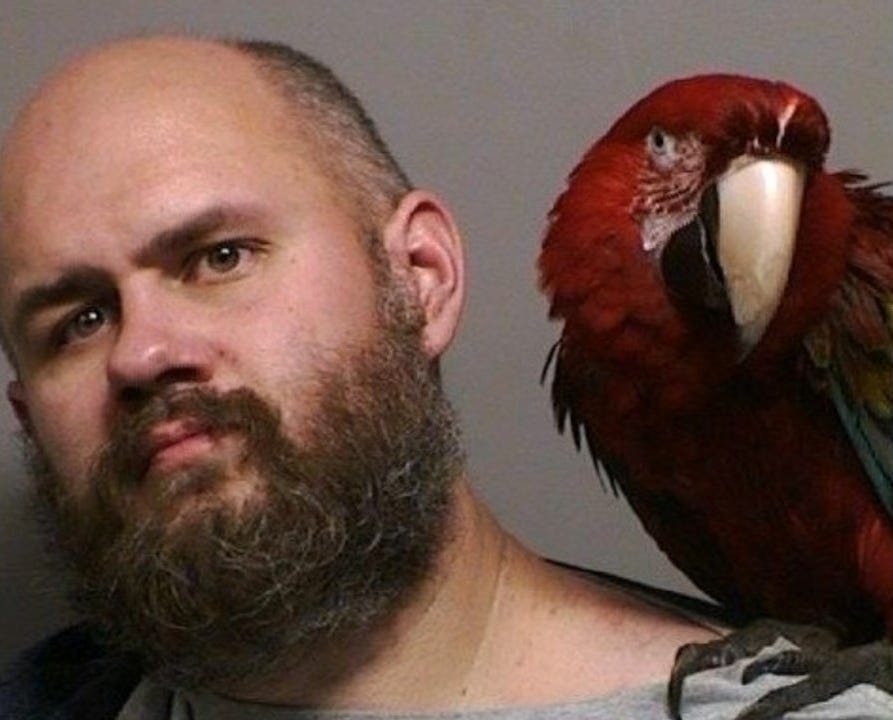 When Buckner went into court, he told the parrot to wait for him out in a tree in the courtyard of the courthouse. While he was in the courtroom, the judge ordered Buckner to be taken into custody and that is when he became worried about his bird. Washington County Court Security Deputy, Shoana McKelvey, says he started talking about his parrot as she took him into custody. Deputy McKelvey decided to go outside and check on the bird. She says when she checked the bird was in the tree in distress because crows were circling it.

“This was Mr. Buckner’s pet. He has had this bird since it has been hatched. I could just tell how concerned he was when he went into custody, this bird was so special to him,” said Deputy McKelvey. Deputy McKelvey brought Buckner outside the courthouse and he was able to get the parrot from the tree. Buckner and the parrot were both brought back inside and after making several calls, they were able to find someone to take the bird while Buckner serves his sentence.

That right there is easily one of the most outrageous mugshots you will ever see. But there is absolutely no way that you can blame the people at the courthouse for letting that picture be taken for two very simple reasons.

1. I think we can all agree that Craig Buckner does not look like the kind of guy you want to fuck with. Creepy beard, is a bird guy, and looks like he may have spent some time atop the throne of the Yellow King. But I KNOW that Craig Buckner is not the kind of guy you want to fuck with if his best friend that he raised since it was hatched got murdered by a murder of crows while you threw his ass in the clink.
2. If anyone that has ever committed a crime asks if they can bring their parrot with them, you say yes every single time. Because there is always a change that the parrot will spill the beans on them by just repeating the words of a victim at a crime scene. Pretty sure they teach you that day 1 at the police academy.

And since it’s Friday and it’s relevant, here are some Koko B. Ware highlights.