I’m sorry but how long are we going to allow this to go on? Think about how many concussions Sidney Crosby has had in his NHL career already. I love highlight reel goals as much as the next guy. Hell, I’d say that I love them even more than the next guy. And I get that Sidney Crosby is a generational talent. He leads the league in goals despite only playing 18 games so far this season while the rest of the league has played somewhere between 22-26. But the man is so fucked up in the head that he’s now scoring goals from BEHIND the net. He doesn’t even know where he’s at half the time. It’s sad to see a man’s mind deteriorate away like this while the whole world just sits there and does nothing about it. The Pittsburgh Penguins as an entire organization should be ashamed for the way that they’ve been handling this situation. They are prioritizing wins over a man’s mental well being and, to be perfectly honest, that disgusts me and it should disgust you too. For shame!

Speaking of the Penguins… I have no idea how to handle this. 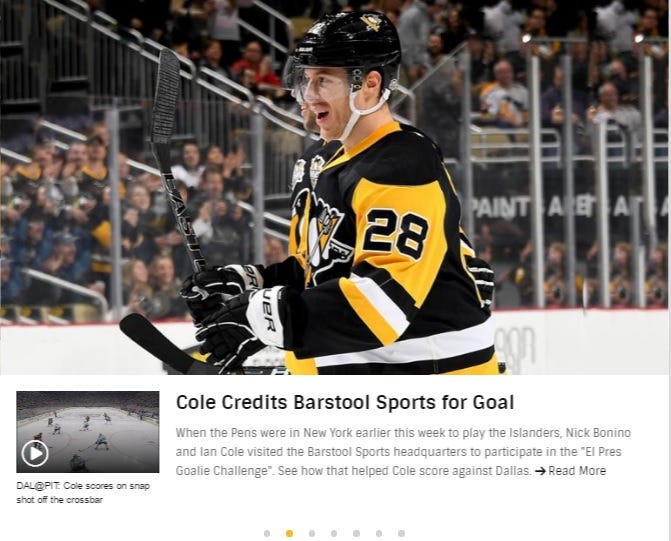 “I think all the credit goes to Barstool. The things that I learned out there in New York from El Pres, enough can’t be said for the things that he taught me,” Cole joked. “The goal that he scored on Bones, I just learned a lot from that. Kudos to him. He’s an inspiration to all of us.”

Are you fucking joking me? I’ve spent all 24 years of my life despising the Pittsburgh Penguins and everything they stand for. Then the man who is my employer goes out of his way to help these sons of bitches? Giving them invaluable lessons that can be applied both in hockey and in life? At least take me out to dinner first before you fuck me like that.

(Pretty cool article though. Just wish that Bonino and Cole played literally anywhere else besides that hell hole of a city).