Last night we were all introduced to the “Claude Giroux Hat Trick”. Basically what it is, is you have 24 hours to score 3 times. Now I hope you don’t have any little kids around because that was a double entendre. Because that’s twice on the ice and at least once in the bedroom (we’re talkin’ bout sex here, people). On Wednesday night, Claude Giroux got engaged to his longtime girlfriend.

What a beauty. She’s not bad either. But yeah, Captain Claude grew up not too far from Ottawa so he popped the question back home, she said yes, and now he’s scored 2 goals in every single game he’s played in since getting engaged. Including that game winner last night off that absurd play from Jake. So congrats to Claude on all the engaged sex he’ll be having for the rest of the season. I know that athletes getting engaged usually has a negative impact on their game (i.e. Rory McIlroy), but I’ve got a good feeling about this one. Now on to the rest of the game.

So here’s the thing… we’re never going to see a truly dominant performance out of this Flyers team. Maybe once or twice by the end of the season but it’s just not how they operate. But they still find a way to get points out of rather dog shit performances and that’s all that really matters. 8 games over the past 2 weeks and they’ve won 5 of them. For a team who we’re still completely unsure of, I’ll take those 2 points however they can get them. They don’t look like a playoff team, they don’t play like a playoff team. But it’s the same thing as last season; this is a team who is usually right there at the end of every game and that’s where they’ll be at the end of the season. Could snag a wild card spot on April 9, or Claude could have his summer free to plan the wedding. But I’m not going to sit here and bitch about how boring the team has looked for 40 minutes a night lately when they’re currently on a 3-game win streak.

5 points in his last 3 games after going on a 6-game slump. And both of his assists to Captain Claude last night came from being bigger and better and more threatening than anybody else out on the ice. Just look at all the attention he commands from the Ottawa defense here and how much space he opens up for Claude. 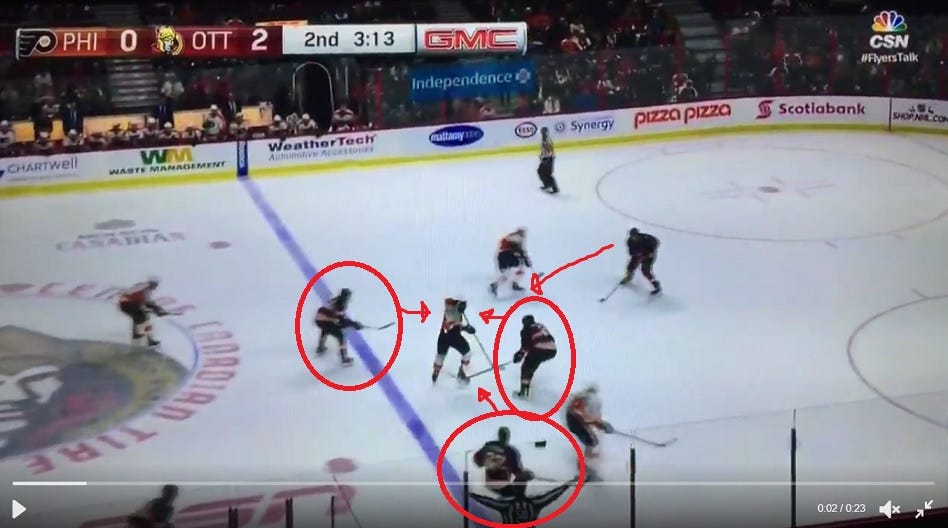 That’s 4 Senators with their eyes glued to Jake. Because he’s a big body and when he makes a move to the middle of the ice like that, teams have to be ready for him to dunk it on their ass. Except instead of driving to the paint and throwing it down, he dishes it off to Claude who has a lane as wide as Broad Street to work with here. Sure, they may have caught a little break here with Raffl’s foot being slightly offside but this goal is all Voracek. 3 game point streak while the Flyers are on a 3 game win streak. You do the math on that one, nerds.

Good Things Happen When You Get The Puck On Net

I wish I loved anything as much as the Flyers defense loves to miss the net with 100mph clap bombs from the point. It’s their favorite past time. The Flyers could probably end up with 10 more shots on goal per game if the blueline would hit the net on half their shots. Instead they just keep painting the backboards black with one timers that are 5 feet off. But here’s Del Zotto just getting pucks on Condon, Bellemare’s able to get a stick on it and it goes Bar Down for a case of TastyKakes. I feel like they worship Fulton Reed or something, but not every shot from the point has to rip through the net. Sometimes floaters like this get the job done as long as there’s traffic along the way. 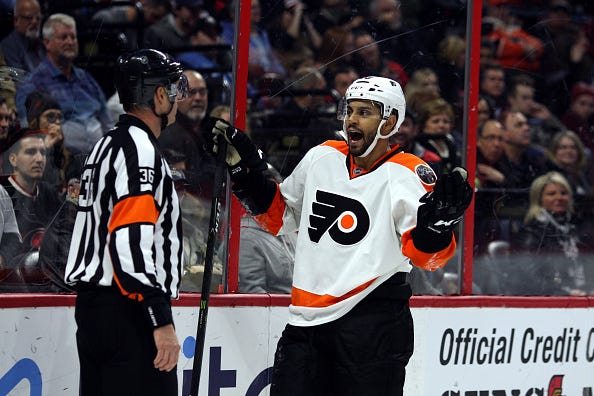 – Along with the Flyers win streak, that’s now 3 games in a row where Andrew MacDonald hasn’t been the worst hockey player in the history of the game. He’s not doing anything great, but he’s also not making many glaring mistakes either. He’s actually starting to look like a guy who would almost be a perfect expansion draft pick as long as he hits 40 games this season. Wouldn’t that be something?

– It’s a damn shame we never got to see a Gudas vs Boroweicki fight last night. 2 giant ogres who don’t even understand the concept of pain going at it. Nothing would make me happier than to see Gudas manage to make that plug’s face look uglier than it already is.

– Another back-to-back coming up this weekend. Chicago tomorrow for some ~*matinee*~ hockey in South Philly at 1pm. Then Sunday in Nashville at 6. My guess is that Mason goes tomorrow but maybe Stoli gets another go at it on the road for the Preds.