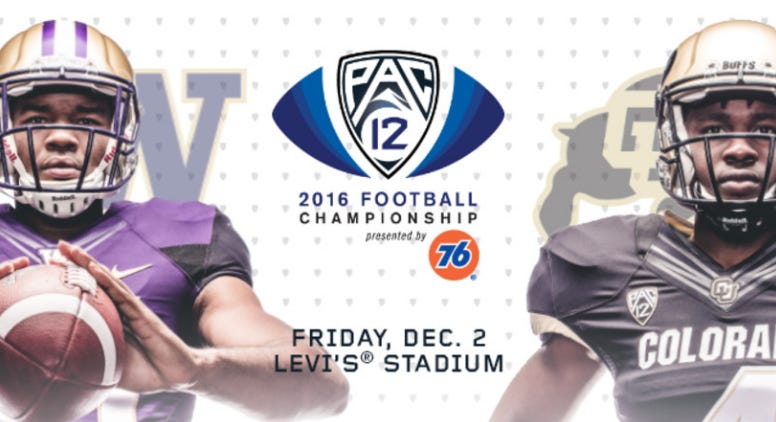 These two PAC 12 heavyweights clash in the conference title game and boy oh boy and am I excited for this one. What’s on the line? Everything. For Washington a win will all but guarantee a spot in the college football playoff. For Colorado there is the slimmest of chances they sneak into the playoff, if literally everyone gets upset, but if not it would mean the Rose Bowl.

Colorado has been a force all year, with their only two losses coming on the road to Michigan (45-28) and USC (21-17). They come into this match up fresh off back-to-back wins against ranked opponents Washington State and Utah. The Buffs needed to edge out a 27-22 win over Utah last week, otherwise USC would be in this spot. Last year, Colorado finished dead last in the PAC 12 South, going 1-8, so to go from worst to winning the conference championship would be remarkable. This adds more to what the Buffs are playing for. Also, Mike MacIntyre, the 2016 Walter Camp National Coach of the Year, could be coaching his last game with the Buffs as rumors have him very interested in the Baylor head coaching vacancy.

Washington has also rebounded from a poor 4-5 showing last year in the PAC 12 North to rise all the way to fourth in the national playoff rankings. Washington has had a very similar year to Colorado, except they chose to not play anyone difficult in their early non-conference schedule, with their one conference loss coming to USC as well. They too had a game last week to see who would represent their division in the title game, against Washington State. In a game that many thought to be close, especially because the Huskies had to go on the road, Washington flat out embarrassed the Cougars in the Apple Cup. It was one of the more impressive all-around performances I’ve seen this year from a team not named Alabama.

Washington is led by there Heisman candidate quarterback Jake Browning (40 TDs 7 INTs) who is an absolute stud. With four more TD passes, Browning will break Jared Goff’s 2015 single season PAC 12 passing touchdown mark. He comes into this title match up with 5 games of three TDs or more and no interceptions. His ability to air it out without turning the ball over is the reason the Huskies are where they are. Colorado brings lots of pressure (blitzing over 40 percent of the time) so it will be imperative for Jake to get the ball out quick and into the hands of his talented receivers, especially John Ross (72 Rec 1,071 Yards 16 TDs). Him and Dante Pettis combined for 30 touchdowns this season. On the ground Myles Gaskin (1180 Yards 10 TDs 6.0 YPC) and Lavon Coleman (735 Yards 6 TDS 8.3 YPC) carry the load to create a dangerous duo. This overall unit is tied for 3rd in points per game with Western Michigan at 44.8 so it will surely be tough to contain Browning and Co. Friday night.

Colorado’s quarterback, Sefo Liufau, is much more of a dual threat option than Browning. The senior gunslinger has 2150 yards (11 TDs 3 INTs) through the air and is now up to 483 yards (7 TDs 3.3 YPC) on the ground. He isn’t going to blow you away with arm talent, but he shows poise in the pocket and makes timely, clutch throws when the Buffs need it most. Liufau reminds me a lot of Dak Prescott in his physical makeup (6’3 230 LBs) and lack of national attention. The dude is tough as nails and will play through just about anything. He’s battled ankle and hip injuries this year, but it’s all been worth it to get to this point. Don’t write this guy off, his best game might have actually come against Michigan of all teams.

Now, Liufau is just a compliment in the running game to the Buffs’ bell-cow Phillip Lindsay who has totaled 1,136 yards and 15 scores this year. If Liufau is able to find success in the passing game, it will open up holes for Lindsay to make big plays and eventually lead to a deadly read-option between the two.

This is where I think the game will be won. As good as Washington’s offense has been all year, USC proved they are vulnerable by holding them to a season-low 13 points.  Colorado boasted the best points per-game allowed average in all of the PAC 12 at 18.4 a contest. Their pass defense is tied with Michigan and Ohio State for the national lead at only 5.4 yards per attempt. Colorado’s corners Chidobe Awuzie and Ahkello Witherspoon will have to play their A game against these talented Washington pass catchers, especially the previously mentioned Ross.

Washington’s defense is no joke either having not given up 30 points in a game all year. They will be missing leading tackler Azeem Victor and top pass rusher Joe Mathis as they both were ruled out for the year a few weeks ago. Washington’s trio of Sidney Jones, Budda Baker, and Kevin King can hang with just about any wide receivers you put in front of them.

They’ll make it very hard for Liufau to have any success. It is also worth noting that Colorado’s punt and kick return coverage is extremely mediocre ranking 119th and 126th respectively while Washington boats two of the best returners in John Ross and Dante Pettis. One mistake to either of these guys and it could be a quick six points for the Huskies.

Sort of a toss-up here as you have long-time Boise State legendary head coach Chris Peterson on one side and this year’s national coach of the year Mike MacIntyre on the other. Take your pick.

This game is going to be a fucking war and I cannot wait to watch. I look at the over under of 56 and I just think under by a good margin. These two teams have such great defenses I see both quarterbacks having issues and committing multiple turnovers. In the end I see Washington’s special teams being the deciding factor late, just like they were against Utah earlier in the year.

If you really want to take a side I think the points are definitely the safe play. I just don’t see Colorado being blown out in this spot.