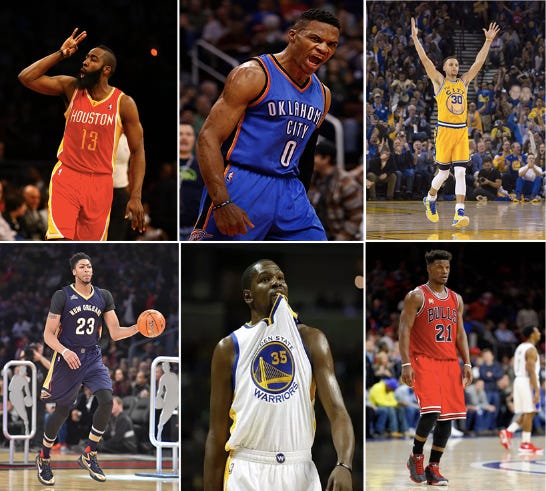 When was the last time you could make a legitimate MVP case for so many players in one season? There are six pictured above that are in the conversation, but you need to add in Lebron/DeRozen/Kawhi at a minimum based on the basketball we’ve seen so far this season. That makes at least 10 dudes that are playing at an MVP caliber level. We’re seeing historic performances from some while others are silently carrying their team to competitive starts. Before you make your final decision we should maybe provide some context to each contestant.

I can’t think of a situation better for PGs than Mike D’Antoni’s offense. Point Guards in this system know a thing or two about winning MVPs, and I’m sorry, but Steve Nash never came close to this sort of production. The scoring isn’t a surprise because that’s who Harden has been since he got to Houston. But you’re lying to yourself if the way he is passing the ball doesn’t make you pause. Harden was supposed to be a “selfish” player, but when you lead the league in assists I’m not sure how that is the case.

The knock on Harden has always been his effort on the defensive end, and honestly the effort has been much better. He’ll never be an All NBA defender, but at the very least he had to try. He has the Rockets at 11-7 and right in the thick of things in the uber competitive West. In looking at their roster I suppose the next best player would be like Eric Gordon? Maybe Pat Beverly? The point is Harden has carried this team for the first month or so, and his play has been incredible.

A large portion of us never got to see Oscar Robertson play. The idea of someone averaging a triple double for an entire season seemed so far fetched I never even considered that it would happen in my lifetime. The game has evolved too much. Well, Russell Westbrook might just do it. Four triple doubles in a row, he’s making something that is so incredibly difficult seem average. That by itself should earn him your vote.

Remember heading into the year all eyes were on Westbrook to see how he would play without Durant. The answer so far has been a historic pace. The Thunder sit at 12-8, have won four in a row and like the Rockets are right in the thick of things. In any other year Westbrook’s year is a guaranteed MVP, that’s how insane 2016-17 has been.

It’s hard to feel bad for Lebron, but as much as I hate him he’s having a great season that I don’t hear a lot of people talking about. Everyone knows the year following a title is always tough, and he’s come back and been as efficient as ever. Naturally the Cavs are the best team in the East by a mile, and much like when DRose won the MVP, there’s a strong chance people get Lebron fatigue when it comes time to vote especially if some of the other guys keep up their production. To me he’s still the best basketball player on the planet, and probably should have at least 2 more MVPs than he currently does.

It will be a long shot for AD to win this award given how bad his team is probably going to end up, but holy shit what he has done to start this season simply is not fair. Dropping 50, throwing up a 45/17 game, he is in all seriousness the only thing the Pelicans have. I don’t think this is a case of a guy just putting up good numbers on a bad team, I think AD would put up these numbers if he played on any team in the league.

Jimmy Butler might be having the best season that nobody is talking about. This Bulls team heading into the year was supposed to be a weird combination of players, none of whom could really shoot. With a locker room full of strong alpha personalities, nobody had any idea how it would work. Well Butler has stepped up and reassured that not only are the Bulls his team, but he deserves to be in the MVP discussion as well. The Bulls in my opinion are the most surprising team in the East so far, and at 10-7 they sit in the 3 seed spot. What’s impressive about his season is Butler has basicallykept his shot attempt numbers the same, he’s just made way more of them. He’s shown he wants the ball at the end and can take and make game winners, he defends at a high level, and is a player you 100% have to gameplan for.

Fuck the Warriors. Not much more needs to be said. Jesus what a start for KD on his new team.

So really you can’t make a bad choice when you think about it. You then have guys like KAT/Porzingis/Cousins etc that probably would get votes too. If I had to, I’d probably go Westbrook, then Lebron, but let’s leave it up to the people.