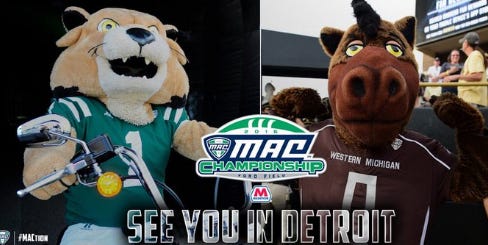 MACtion baby. Just doesn’t get any better than this. P.J. Fleck’s Row The Boat disciples take their undefeated season to Motown where the Ohio Bobcats try to pull off the massive upset. This could be P.J. Fleck’s final game as Western Michigan’s head coach as he is being highly sought out by several big name schools. Fleck hasn’t talked to any schools and has said he just wants to focus on this game before anything else. A MAC Championship win would all, but guarantee Western Michigan a spot in the Cotton Bowl where the highest ranked Group of 5 conference champion gets a spot. Navy appears to be the only team that could spoil that scenario, but with Western Mich currently at 17 and Navy at 19 it would be tough to put Navy on top if the Broncos did their job.

Western Michigan:
The Broncos started their dream season in Northwestern where they needed a fluky fumble into the endzone to hold on and win 22-21. Since then they haven’t played a game closer than 14 points, absolutely tearing through their conference schedule. Last week they played Toledo for a spot in this championship game and took care of business rather smoothly 55-35, and to be honest the game was even more of a blowout than the score showed.

Ohio: Ohio started the season with a home loss to Texas State, but two weeks later only trailed by two points going into the fourth quarter at Tennessee. They finished the season 6-2 in the MAC, but had to claw out a 9-3 victory over Akron to get to the title game. It’s pretty obvious why they are a heavy underdog in this game.

The Broncos offense is a fireworks show ready to happen.  They’re very well balanced and can beat you anyway they want to. Senior quarterback Zach Terrell is a monster, coming into this game with 30 touchdowns to just one interception. He’s as efficient as it gets with his 71.7 completion percentage topping all of college football. His favorite target, Corey Davis, might end up being the first wide receiver off the board in the 2017 NFL Draft. Davis’s story just to get to college is incredible by itself and it seems like fate drew him and P.J. Fleck to each other. Without one another who knows where the other would be right now? Davis couldn’t get a school to commit to him because of his poor grades while Fleck had weeks to assemble a recruiting class out of thin air. Fleck saw the drive Davis had in himself and with the right push there was something to be had. No big deal or anything, but that something turned into 5,068 career yards which are the most ever in college football history. This Fleck guy seems to know what he’s doing huh? Davis, the MAC offensive player of the year, enters this game with 17 touchdowns on the year, including this one against Ball State…

The dynamic duo of Jarvion Franklin and Jamauri Bogan have combined for 20 touchdowns and average 247.3 yards on the ground per contest. P.J. Fleck has this offense scoring over 44 points a game so the Bobcats will have their hands completely full trying to avoid a blow out here.

The Bobcats offense comes with a big question mark of who will be their quarterback come game time. Senior quarterback Greg Windham has battled a leg injury and is listed as questionable to suit up against the Broncos. Quinton Maxwell, who has started the last six games (6TDs 3INTs), will likely be under center. Maxwell, a freshman, is inexperienced and has only one true good game (against Buffalo) on the season where threw for 200 yards and totaled three touchdowns. He’s shaky at best. Windham is not spectacular by any means, but I’d much rather a senior going for me in this type of game.

Western Michigan’s defense boasts two shutouts this year, starring cornerback Darius Phillips who leads the team with four interceptions, THREE of which he took back to the house. Again, depending on who Ohio’s quarterback is will determine how close this game really will be.

Ohio boasts one of the best running defenses in college football, but that might not mean much in this game. If the Bobcats take away the Broncos rushing attack, Terrell and Davis will torch the secondary. Pick your poison if your Ohio.

There’s no debate here, Western Michigan’s P.J. Fleck is Mr. MACtion. He is climbing his way up the ranks of the Mount Rushmore of Football Guys and has put Western Michigan on the map which is nuts. He’s as electric as they come and you know a perfect season capped off with a MAC Championship is all he could have ever dreamed of. If you don’t know much about P.J. Fleck, he gave an awesome first hand account of what “Row The Boat” means to him and his players, so when you’re done buying every shirt we have in the Barstool Store give it a read P.J. Fleck

Ohio hangs in this game just because MACtion is fucking crazy. Expect some fake punts, a safety, a wide receiver pass for a touchdown, because it’s all going to happen. I’d take Ohio and the points and just pray for chaos and a fun game. The PMT boys will be at Ford Field, hopefully on the sideline, for all the action so be sure to check them out.