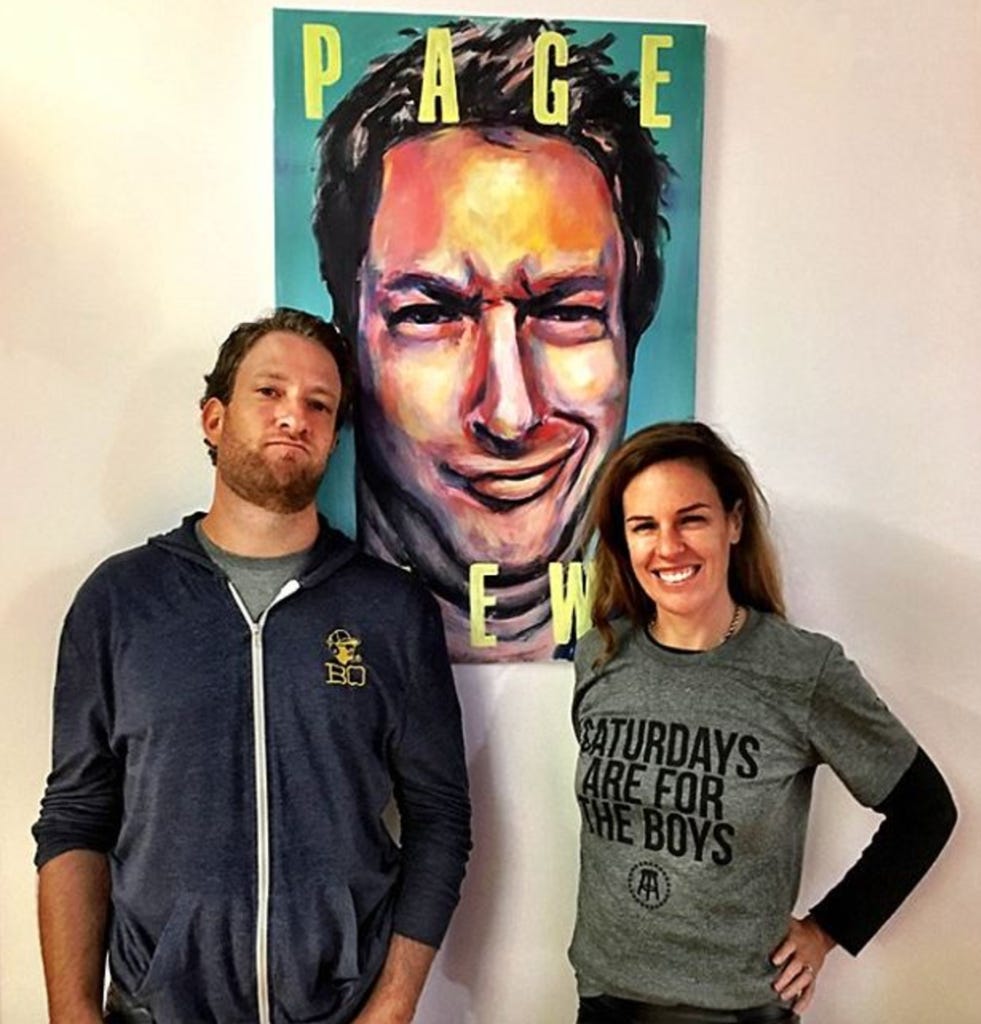 Welcome back to the Barstool Office Power Rankings! Took the week off last week because we were only here Monday and half of Tuesday basically. Thanksgiving + the overall ease of a blogger office schedule in general combined to make it pretty dead around here. But everyone came back rested and relaxed and refreshed and sufficiently sick of their annoying ass families and now it’s officially a wrap on our 13th week in NYC HQ.

Kicked off the week with Cyber Monday where we sold a shitttttttt ton of t-shirts and ugly sweaters to raise money for a good cause – the continued operation of this blog. The RV doesn’t pay for its own gas to take Caleb on a 2 month vacation, our building doesn’t pay its own heating bills for the heat it never turns on, KFC doesn’t pay his own salary to come in from 11-4 Monday-Thursday.

You get the drift. Basically we need money so thank you for giving it to us. Enjoy your merchandise.

Other than that is was pretty much business as usual, so let’s get into it. Power ranking the top 5 Barstool employees of the week, calling out some people who need to pick it up, and covering all the highlights. 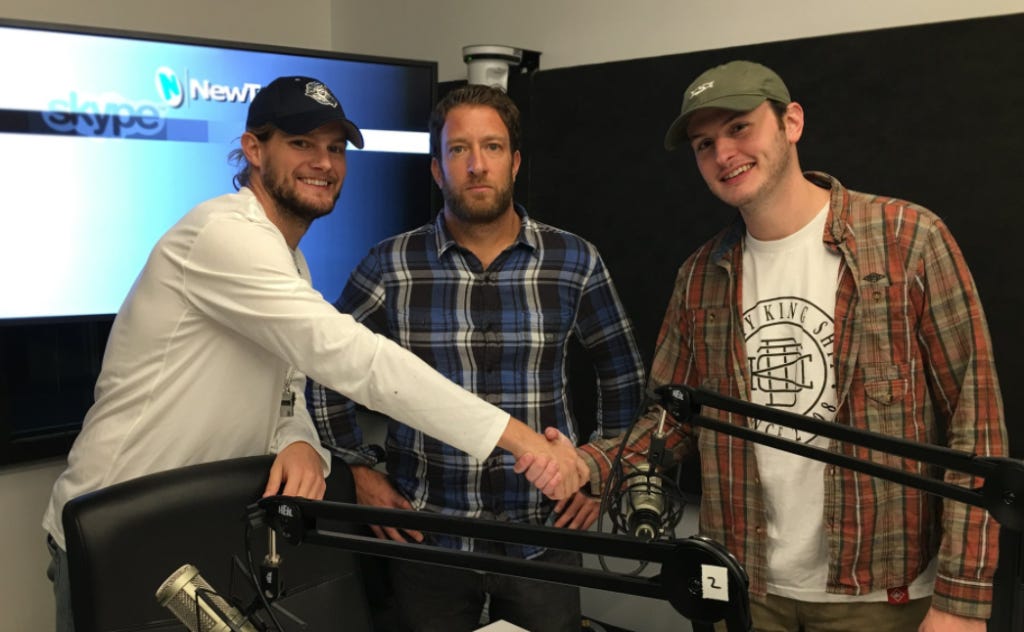 Everybody knows Caleb has been LVP of every single Power Rankings since their creation but I figured it was time to extend the olive branch. We’re trying to build our friendship back brick by brick, coming along slowly but surely. Spend most days sitting back to back with our headphones on texting each other the links to new songs we like, then texting back our responses thumbs up or thumbs down, from literally 1.5 feet away. Yes #BlogMusic may be the superior playlist to his Natty Tour Music……but he’s still got some great taste.

As for Rone I almost didn’t want to include him because people like him so much that it’s starting to get annoying, I mean I feel like if you start your Barstool career as universally loved without having to go through the period where everyone hates your guts like all of us had to, are you even a real blogger?

Need somebody to be mean to him and tell him he sucks, even if it’s just for a week, that’s how you manage egos.

These two are like absurdly funny aliens from outer space. 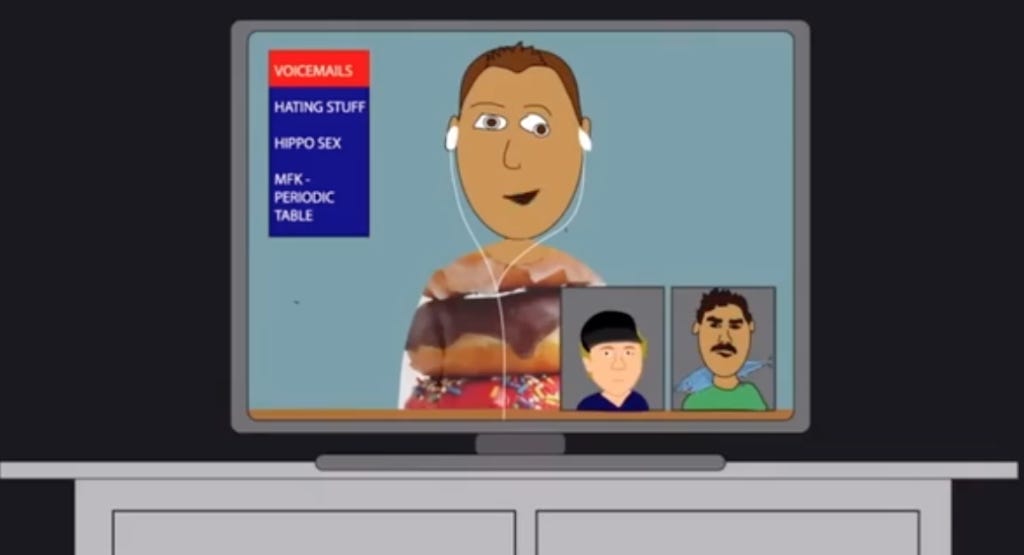 The glue guys that hold Barstool together at the seams collaborating on a KFC Radio documentary that was, in a word, perfection. 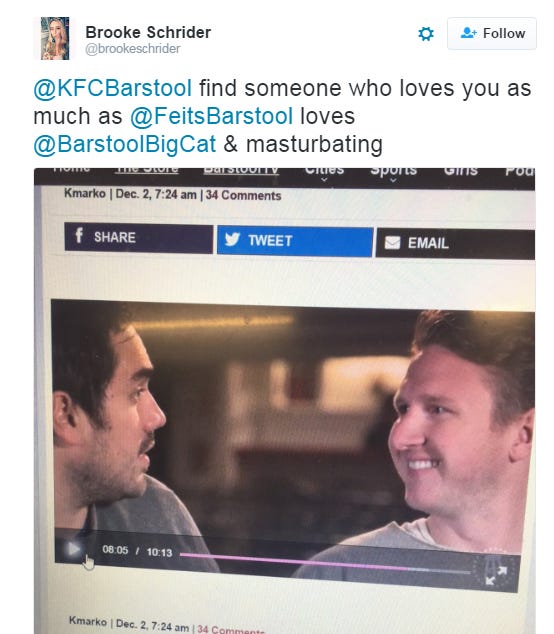 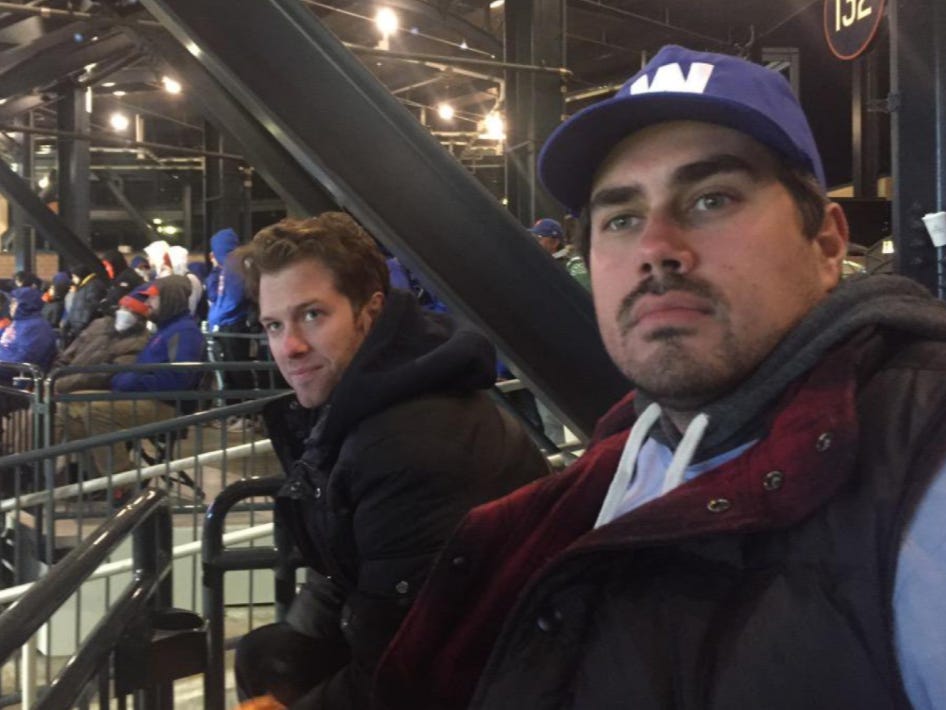 Without a doubt my favorite podcast episode of the year, if not all time at Barstool. Ditching the KFC and Big Cat personas for some Kevin Clancy and Dan Katz real talk, from everything to the pressures of their jobs, to the fine line between being public figures and maintaining a private life, addressing the apparent “rift” that came with the end of KFC Radio 1.0, talking about their pasts and biggest fears going forward.

Always the best content IMO, when, to paraphrase a popular show on MTV, bloggers agree to have their lives taped… to find out what happens… when bloggers stop being polite… and start getting real. 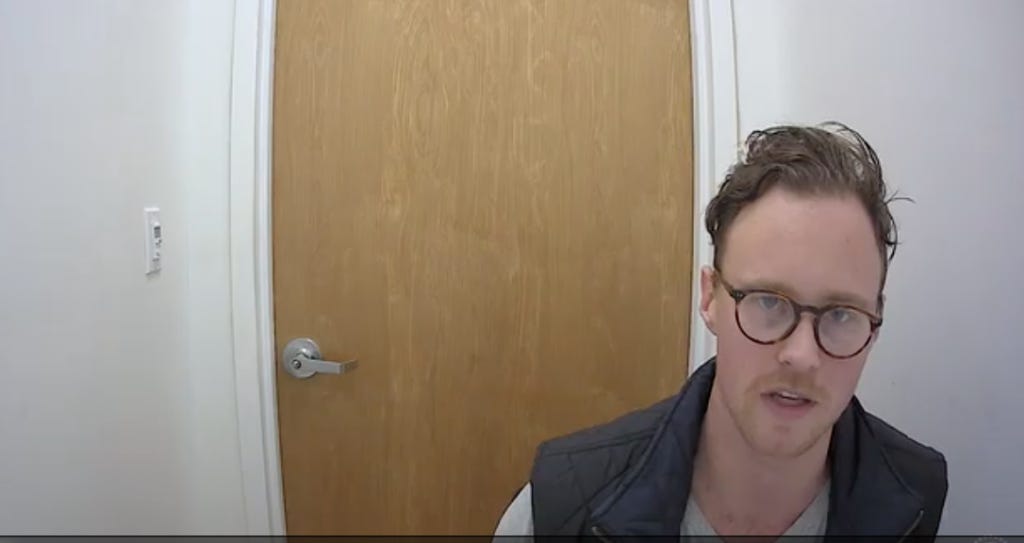 I mean this dude was fucking electric. First guy to get through Barstool Idol unanimously with 3 thumbs up before even giving his pitch. Sometimes you look for talent, sometimes you just have to take a chance on a guy because he has a funny accent and you can’t understand if he is saying “pale ales” or “power hours.” Also one who does eyeball shots of liquor in the green room before the audition. Like, poured directly into the retina. 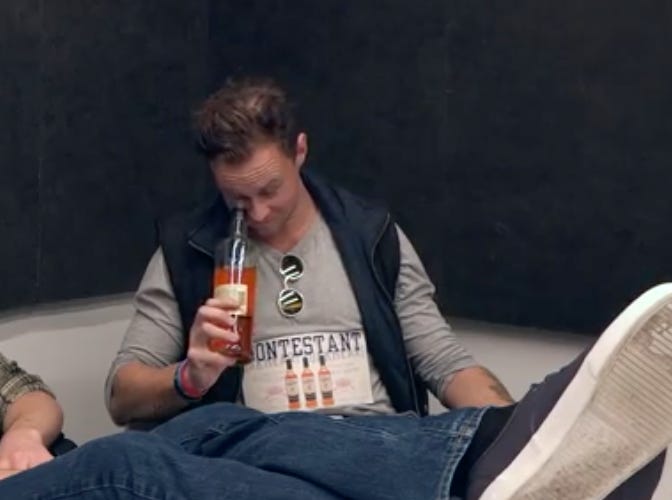 When you punt footballs with 35 second hang time on Saturday afternoon then serve me an Old Fashioned with artisanal bitters at a mixology bar in Brooklyn at night: 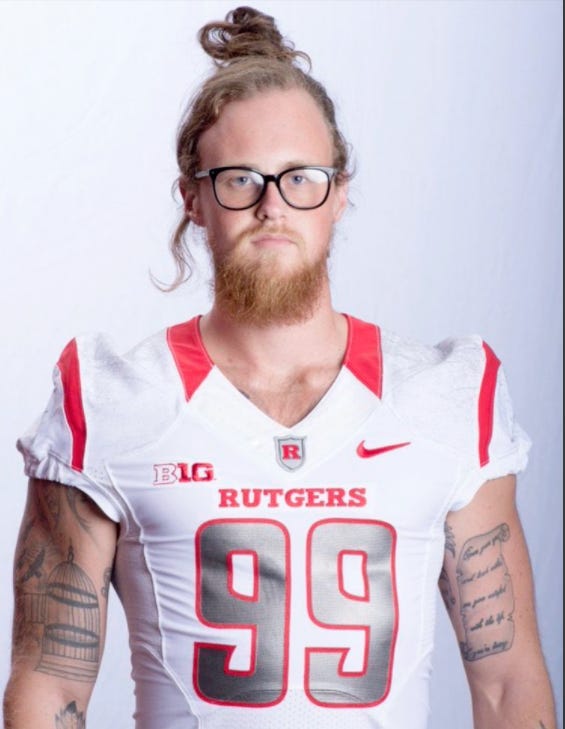 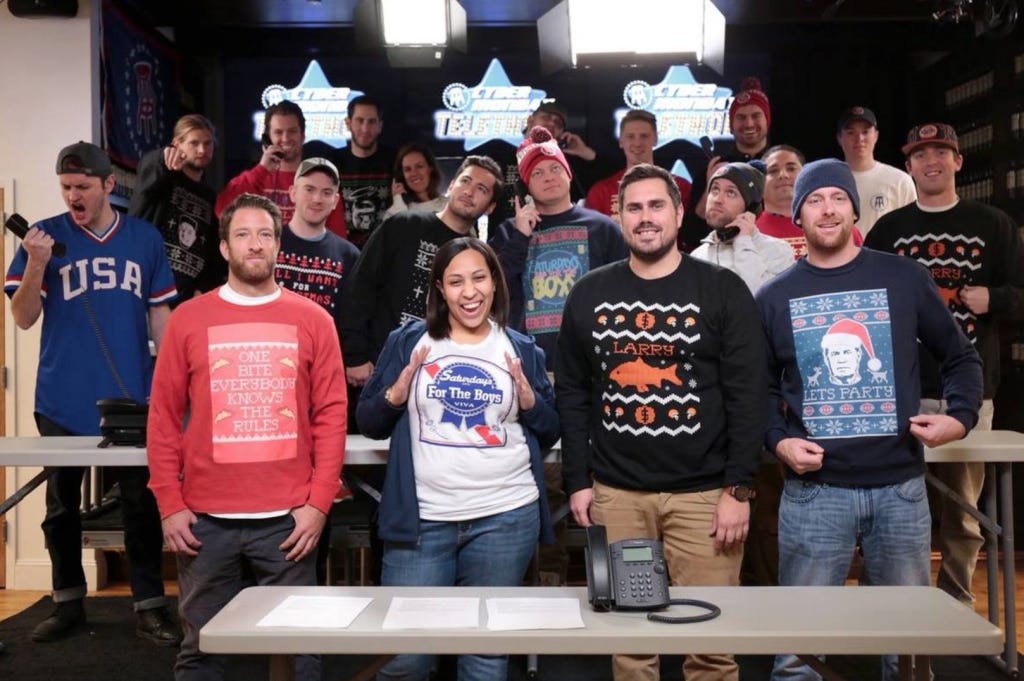 Easiest #1 ever. Nobody has ever had a better week than the Barstool consumer. I mean you basically got the best deals on the best merch ever seen on the internet…and not only that, you THEN got to call in to the office and talk to your favorite blogger* on the phone.

Yup, Barstool Black Friday and Barstool Cyber Monday were both smash successes for the holiday season, and the kids that we raised all that money for have nobody to thank but you, the loyal fan. The Stoolies. Salt of the Earth. Honestly can’t thank you all enough for helping us afford another floor in the building so there isn’t a 10 minute wait for the bathroom and for contributing to my holiday bonus so I can start to pay off my crippling credit card debt.

*Unless you didn’t get put through to Dan. I think every call I got asked if they could talk to Big Cat instead.

Or Glenny Balls. That one was insulting. 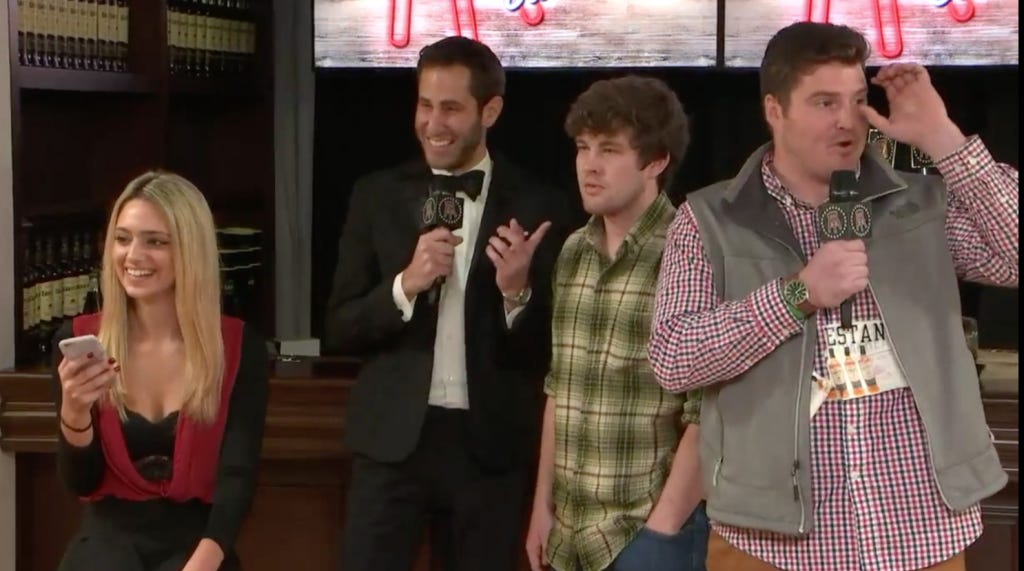 Dylan’s his name, Intern Tex is his other name, and taking L’s is his game.

Got beat in wrestling by a Barstool Idol contestant that he challenged to a fight.

Got beat down by Paul Finebaum on the radio.

Form tackling could use some work.

L after L after L for the kid. 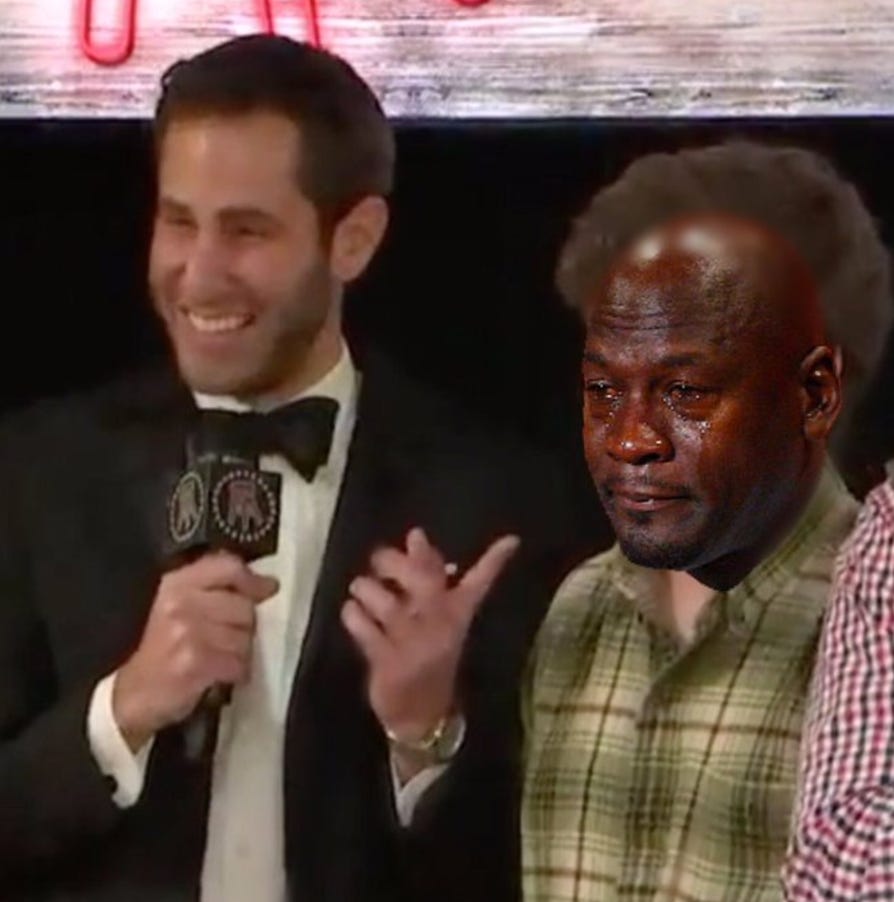 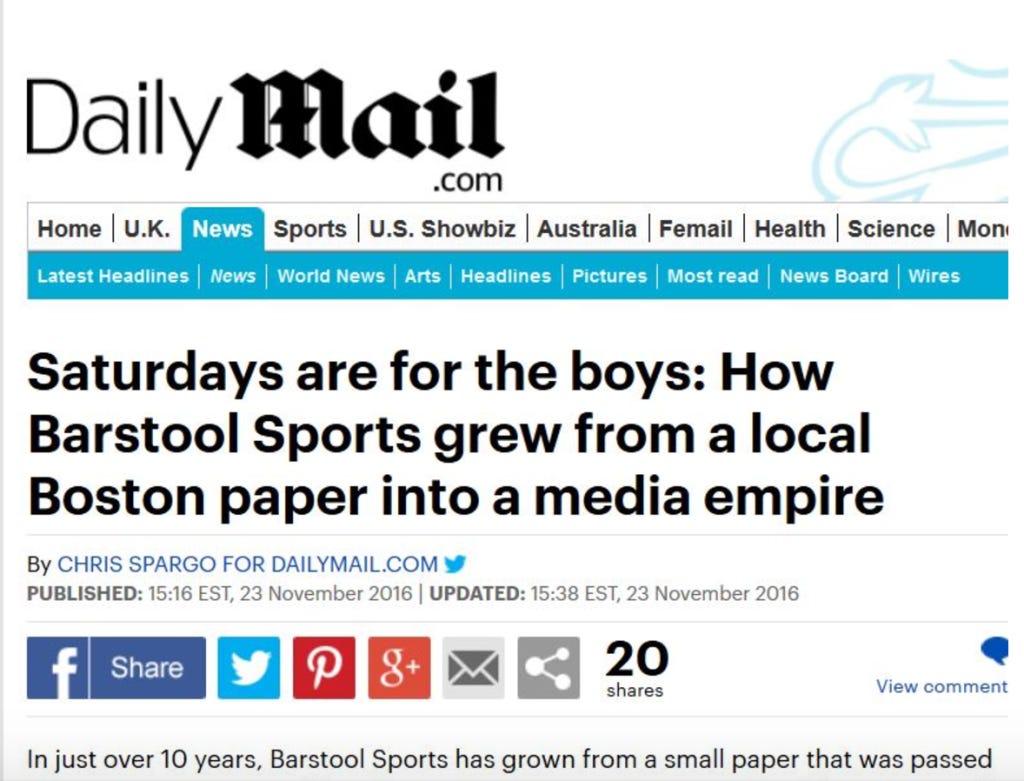 First of all big thanks to The Daily Mail for the profile. Good to see Barstool has gone international. However just can’t let this blatant sign of disrespect slide.

Come on man, I’ve got a brand to protect here.

Also there were like 19 typos in that thing. -EIC 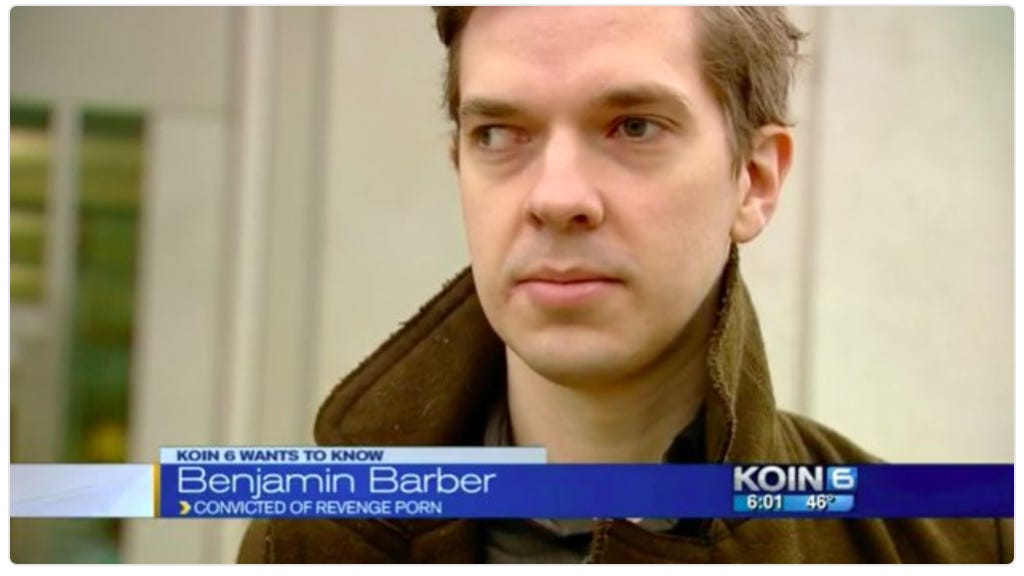 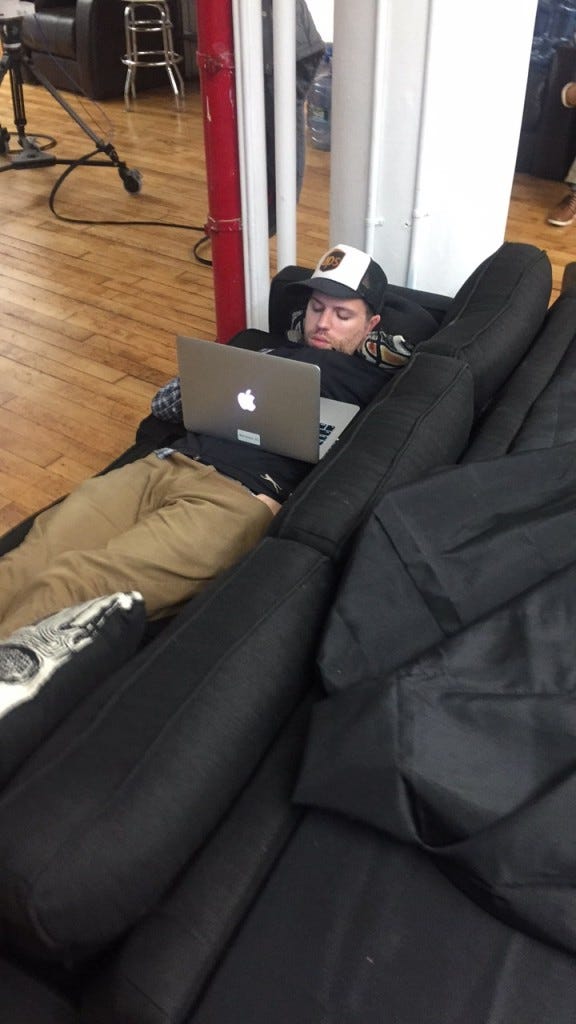 Power Rankings day is a TOUGH time to fall asleep laying on the couch at 2 PM.

You should have seen the smile on Smitty’s face as he ran over to tell me to grab my phone and come over. Like a kid of Christmas morning.

Display Of Grit Of The Week

1,000,000 interns and one of our most valuable comedic talents is sucking poop out of an RV with a hose.

Ellen Degeneres Impression of the Week

Mom of the Week

I told you guys, I CRUSH the mom demo. Moms love me. Always have, always will. Friends’ moms, girlfriends’ moms, Barstool moms, random moms I encounter in day to day life. Great with parents.

Advice of the Week

Office Guests of the Week 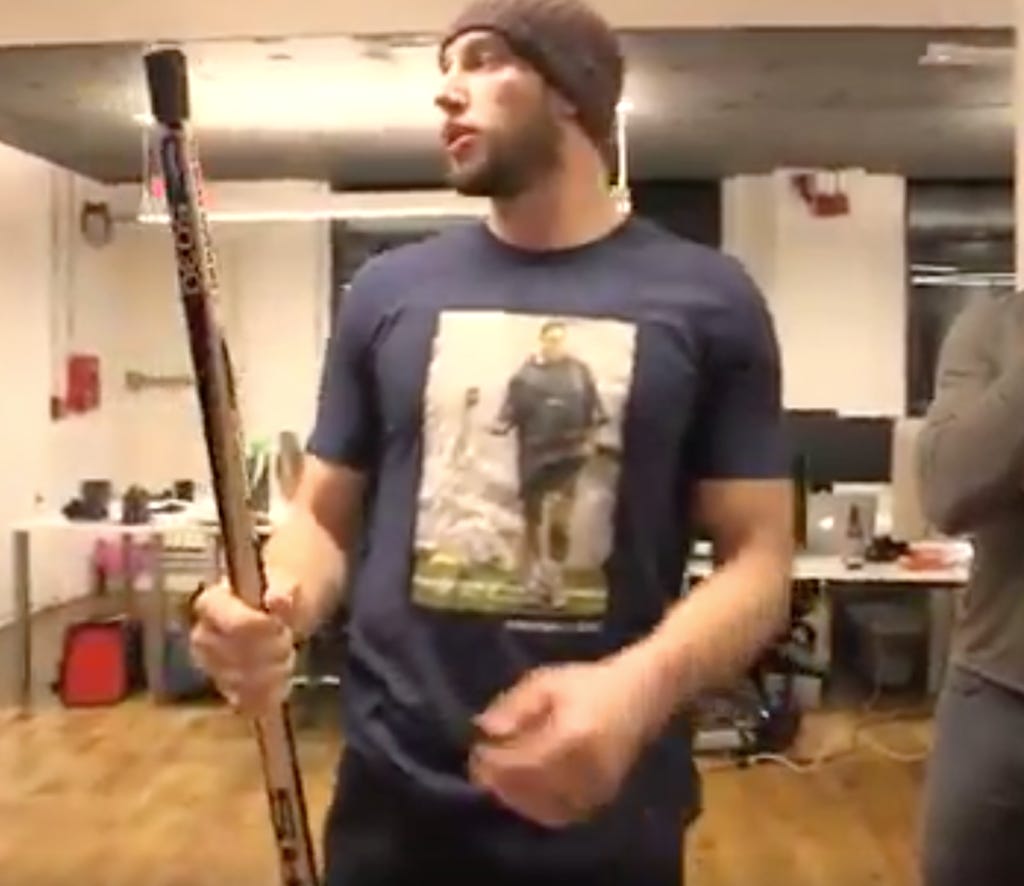 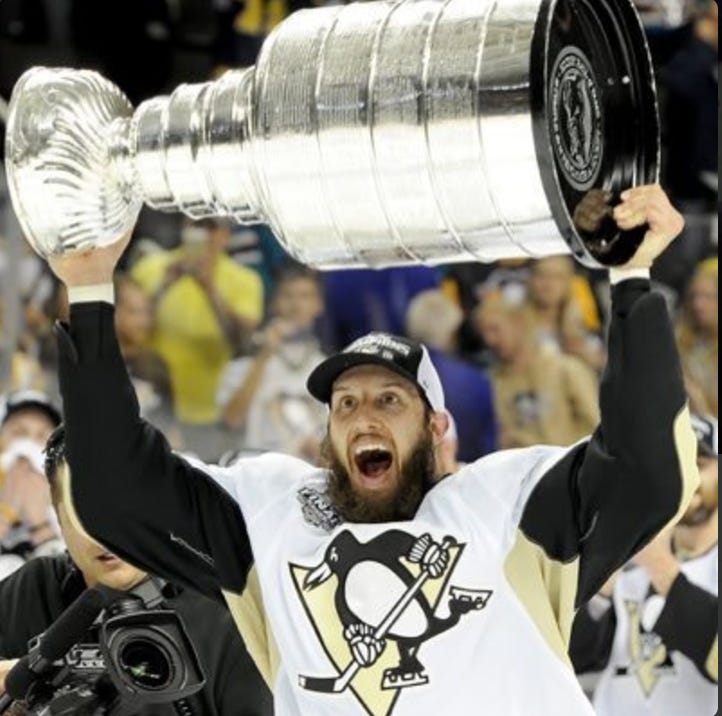 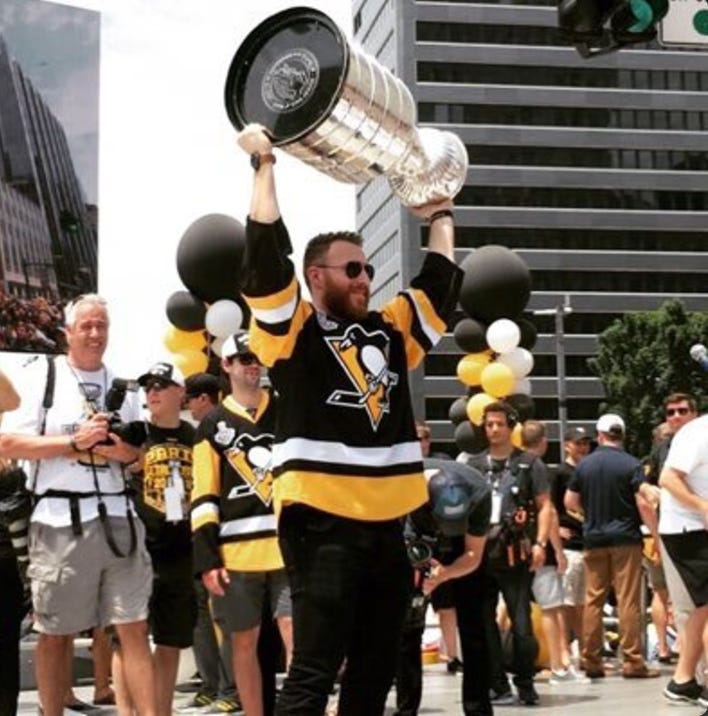 Ian Cole and Nick Bonino getting stoned by the people’s goalie.

Live Reaction of the Week

KFC’s finding out in real time that the Mets re-signed Cespedes.

Feud of the Week

For the record I have the same feud with Duane Reade. Well I did, until they joined Lolo Jones as one of the two Twitter accounts that I know have me blocked.

College Course of the Week

Best class ever. Can’t believe I spent half my college career sitting in a lecture hall learning about pre-1850 British Literature and these guys are reading Barstool Sports for credits.

New Saying Of The Week

Last gun in the bullet, you’ve got competition.

One Finger Selfie Challenge Of The Week 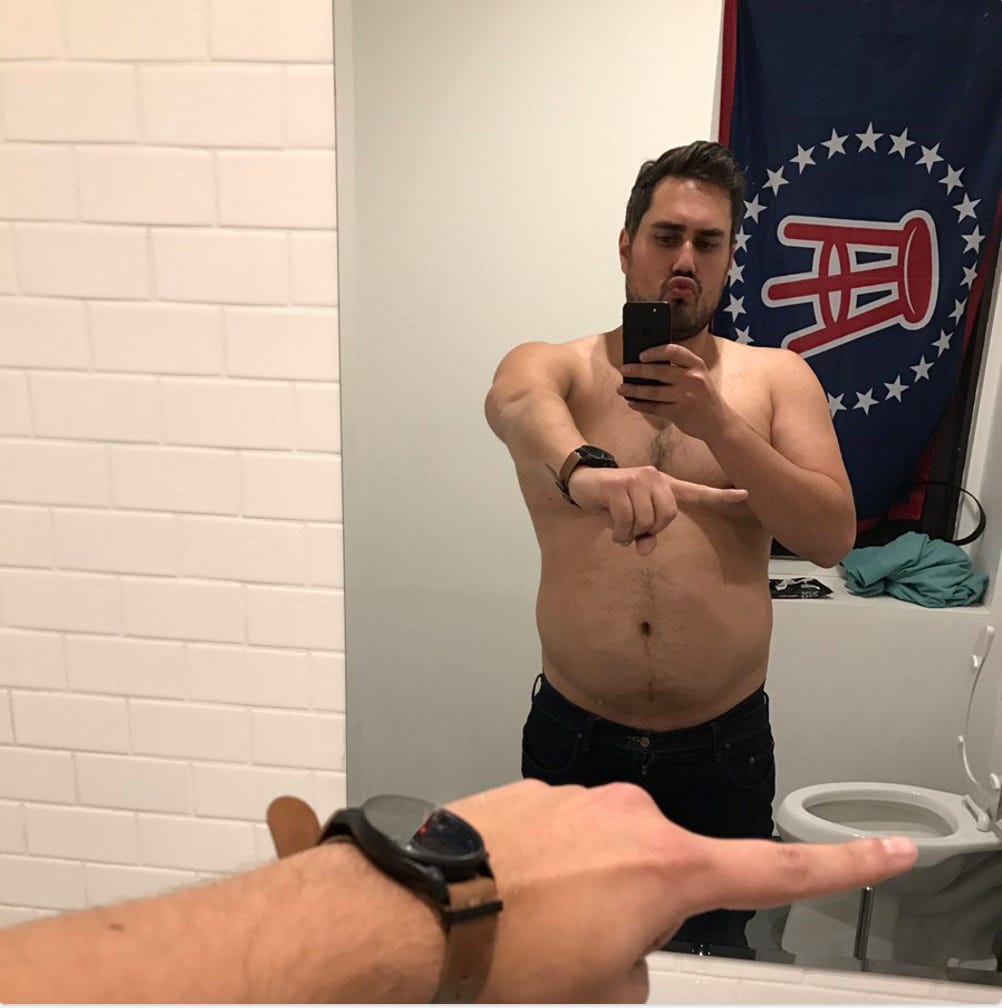 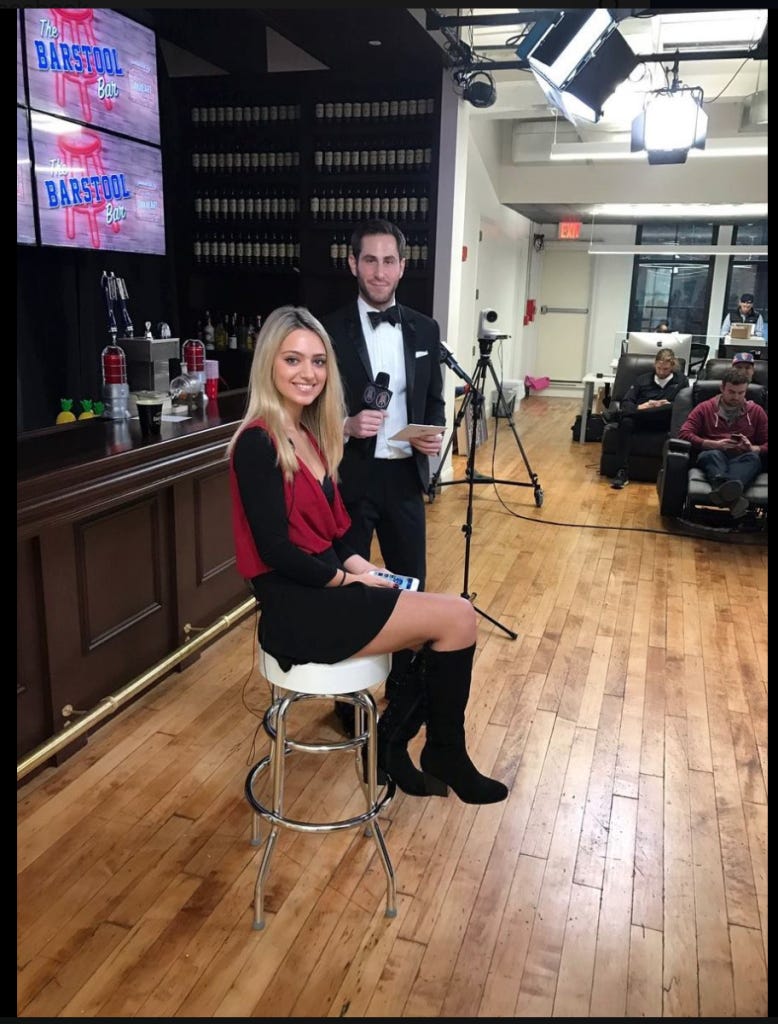 Ebony Deep Thought of the Week

It’s 2016, we don’t got time to be judging people about oral sex. Totally agree. Also I concur that you’re all whack motherfuckers.

Picture of the Week 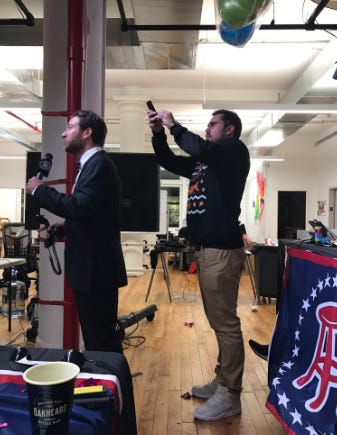 That’s it for this week, see everyone next Friday, don’t forget to smash the signups on the newsletter and app.