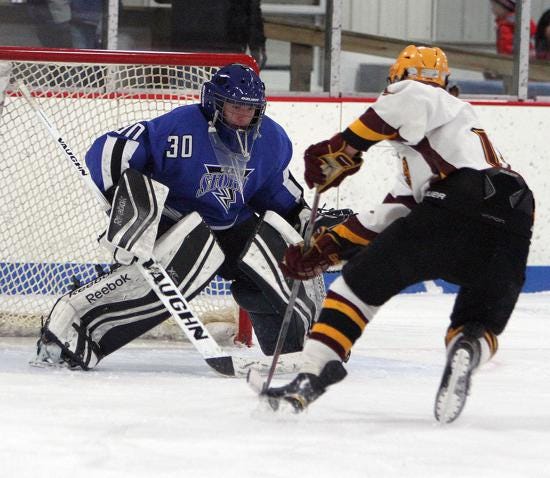 MN Hockey Hub – Morris/Benson senior goaltender Tony Bruns is so accustomed to facing insanely high numbers of shots each game that he brushes aside mass amounts of flying pucks as effortlessly as a northwoods outdoorsman swats mosquitoes.

In his four seasons as a starter for the Storm, Bruns routinely has made 40, 50, 60 and even 70-plus stops in a single game. So he didn’t even entertain the notion he was in the midst of what is believed to be a state- and national-record performance on Saturday in a season-opening 12-0 loss to Litchfield/Dassel-Cokato…On the bus ride home, Bruns, who had mentioned to Morris/Benson coach Jeremiah Day that he had never been so sore after a game, glanced at the scoresheet and saw his save total. Ninety-eight.

Yo, this kid better not be friends with anybody on that team. He better just show up to practices and games, get dressed, play for a little, get off the ice, change back into his street clothes and then not talk to a single one of these jackasses until next time. Hell, I might not even talk to my parents if I’m Tony Bruns. Kid has been stuck playing for this shitty school for 4 straight years? Throw the kid a bone and move a town over, mom and pop. The kid is making 50 saves on a nightly basis, obviously he has some potential but he’s stuck playing at Bender High. I guess it all worked out in the grand scheme of things since he’d never have a chance to set a national record for saves if he played on a team with kids who can actually tie their own skates. But still.

I think what this goes to show you is that maybe we should open up high school hockey to trades and free agency. Everybody knows the Minnesota State High School Hockey Tournament is one of the greatest sporting events of the year. March Madness, World Juniors, Minnesota State High School Hockey Tournament. No particular order but those are for sure the top 3. And nobody deserves to play in the tourney more than Tony Bruns. If his selfish ass parents aren’t going to make the move, then I think he should be able to sign with a new team before March. Let’s get the movement started.