Not a great call by this dude to slip this N-Bomb into everyone’s lives, especially considering this was the first rap battle he’s done. Good way to quickly end a rap career. I know the point of battle rap is to be offensive, but that’s pretty much the one word you can’t say. It doesn’t matter if he didn’t put the hard “r” at the end. He should just stick to saying it behind closed doors like the rest of white people.

This guy, Bowski, had a great reaction. 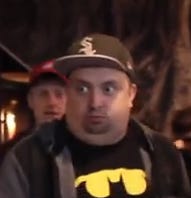 He also wound up giving the best advice to the kid, because I think this moron was about to repeat his terrible rap line. What is crazy is that it has happened dozens of times in rap battles and in rap in general. Just don’t be a fucking idiot.