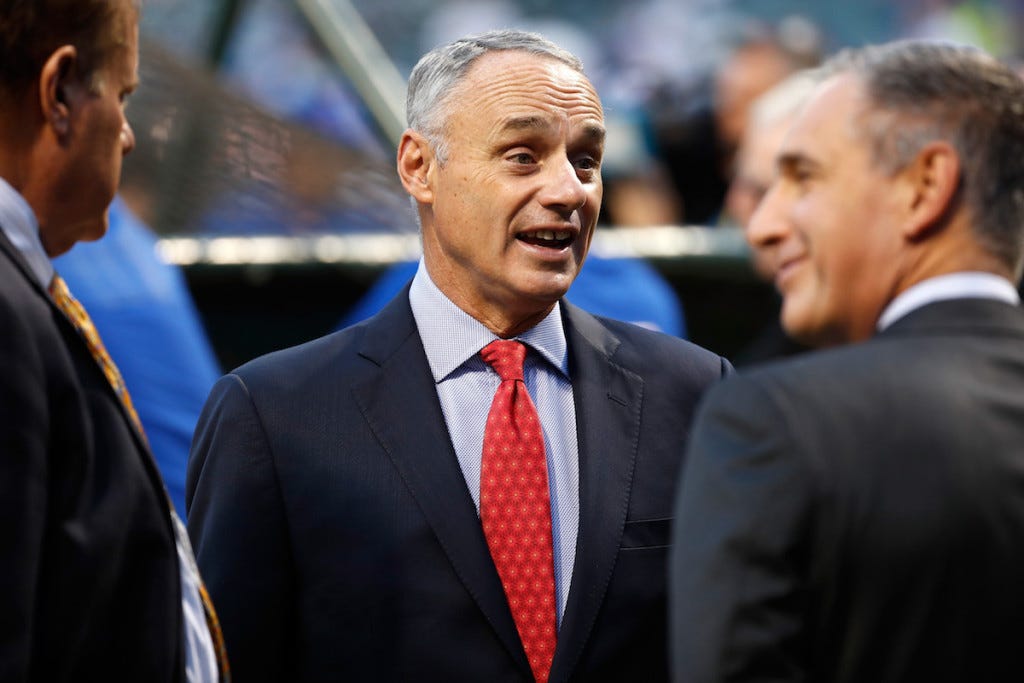 If we’re being completely honest, I was stunned that they got this thing done before the deadline.

Earlier in the week, the two sides were still far apart on a number of issues, but a tip of the cap to the owners, who recognized that avoiding a lockout and continuing the momentum that the game of baseball has recently built was more important than an international draft. At least, for now. I expect that to come up again at some point, perhaps with a little more planning in advance. I saw some complaints from fans that the new CBA was too much like the old CBA, but I don’t necessarily think that’s the worst thing in the world. Let’s take a look at some of the details within the new CBA.

Luxury tax threshold: This was holding up a handful of teams in free agency, because they not only wanted to know what the new threshold would be, but what the penalty would be for exceeding it. The threshold went up from $189 million to $195 million in 2017, and will follow a progression of $197 million, $206 million, $209 million, $210 million over the life of the five-year agreement. It was discussed that they’d change the rule so that teams would have to forfeit draft picks for going over, but that was not agreed upon. Instead, teams will pay a percentage for every dollar that they go over, like always, and teams that go way over the threshold, in the $250 million region, will pay a 60-70% tax. The highest payroll in 2016 belonged to the Yankees, who had a $223 million payroll, so I don’t think we’ll end up seeing anybody get slapped with that tax. Normally, I’d say that this system wouldn’t stop teams like the Yankees, Dodgers, Red Sox and Tigers from going over the threshold, but in the new CBA, going over has more penalties than just being taxed.

International draft: There isn’t one. I think the idea was met with too much blowback initially to get something done on the first try, but I would’ve been in favor of it. Some of the best amateur talent in the world is what you’ll find outside of the actual MLB Draft, so these teams with awful records that are supposed to be getting their pick of the best amateur players in order to rebuild their franchises in the future are only getting to pick from a small fraction of what’s actually out there. Teams like the Red Sox can essentially just buy first-round, first overall-type talent because they have the money, just like they did with Yoan Moncada, who is the No. 1 prospect in baseball. For the sake of competitive balance, there should be some sort of international draft system in place at some point.

26-man roster: This isn’t happening, either. I liked the idea, but it’s not the end of the world that they didn’t agree upon this. I’m sure every single team would’ve just used that extra spot for a reliever, which just means more pitching changes, which, in turn, means longer games, so I guess we dodged a bullet there. What I can’t understand is how the hell they haven’t done something about the full 40-man rosters being active in September during September call-ups. For the love of God, do you really need 40 dudes on your active roster for a baseball game every single night for a month? If you wanna have 40 players physically present after September call-ups, then go nuts. But there should be a rule that only 30 players at the absolute most can be active on any given night. That one shouldn’t be too hard to hammer out, because those are the games when you get 15 pitching changes a night. You think a manager is gonna be afforded that type of luxury and not use it? No way. He’s got nowhere to be. You think he cares that the games are pushing four hours? Nope.

Smokeless tobacco: Not a huge detail, but I found it interesting that MLB has banned smokeless tobacco for all new players. The current players have been grandfathered in, so they will not be affected by this rule change, but all minor league players who dip and plan on making it to The Show, you’re gonna have to kick the can, which sucks. I get it, though. For the players, it’s routine and some would even tell you it helps them play better, but it does have an impact on the younger fans who watch. I’ve told this story before, but I started dipping when I was in high school, because Dustin Pedroia was my idol and I saw him doing it. I’ve quit probably 10 times over the years, but I think I’m on my longest run of “quitting”. It’s been about nine months, and it’s been a less than pleasurable experience. Younger kids should know better than to pick up a bad habit just because somebody else is doing it, but we’re stupid. So, good for MLB, I guess? Fuck, I miss it.

Disabled list: The disabled list has been reduced from 15 days to 10 days. It may seem like a minor adjustment, but this is a good thing. Think of it this way — how many times has a player on your team sat out for five games here, or five games there with a nagging injury that isn’t serious enough to go on the 15-day disabled list, but it’s bothersome enough that they need a little rest. Maybe they play through it and make it worse. Well, now they don’t have to. Now, they can go on the 10-day disabled list, and your team can fill that roster spot with someone who can actually take the field. For a pitcher, you basically just skip your turn in the rotation a couple times. Doesn’t seem as serious as so-and-so needs a DL stint, so we’ll see them in half a month minimum. Ten days, rest up, come back, boom. Problem solved.