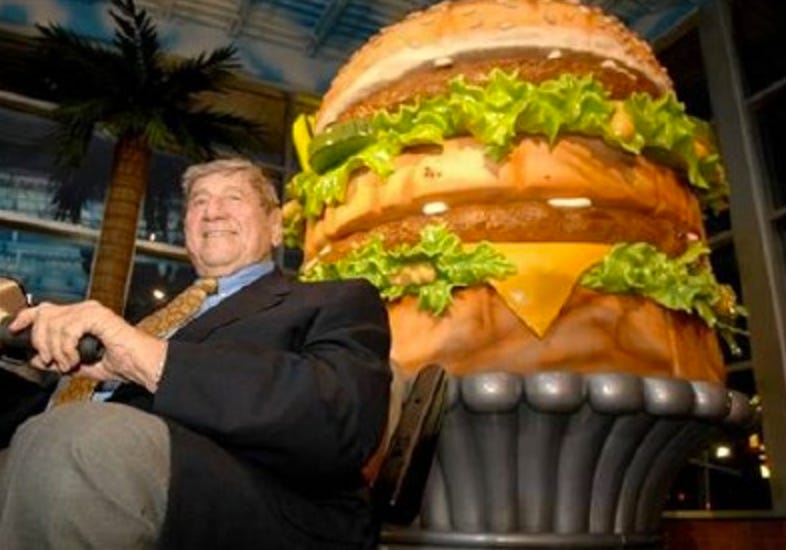 AP - Michael James “Jim” Delligatti, the McDonald’s franchisee who created the Big Mac nearly 50 years ago and saw it become perhaps the best-known fast-food sandwich in the world, died Monday at home in Pittsburgh. Delligatti, who according to his son ate at least one 540-calorie Big Mac a week for decades, was 98.

Delligatti’s franchise was based in Uniontown, not far from Pittsburgh, when he invented the chain’s signature burger in 1967 after deciding customers wanted a bigger sandwich. Demand exploded as Delligatti’s sandwich spread to the rest of his 47 stores in Pennsylvania and was added to the chain’s national menu in 1968.

Einstein. Edison. Delligatti. Innovators that everyone admires. Inventors who have shaped this country, nay, shaped this world as we know it today. Guys who don’t even need a first name, like Prince, because they are so admired and revered for their contributions to the human race. Jim Delligatti, we solute you. When a simple cheeseburger wasn’t enough, he took it up a notch. When a simple condiment wasn’t enough, he made his own. He has kept you fed and happy on road trips, drunk nights, high drives, and everywhere in between. Genius isn’t a word to describe him, because you cannot reduce him to just one word. RIP to a man who lived until the age of 98, eating Big Macs every step of the way. May we all try to be like him.