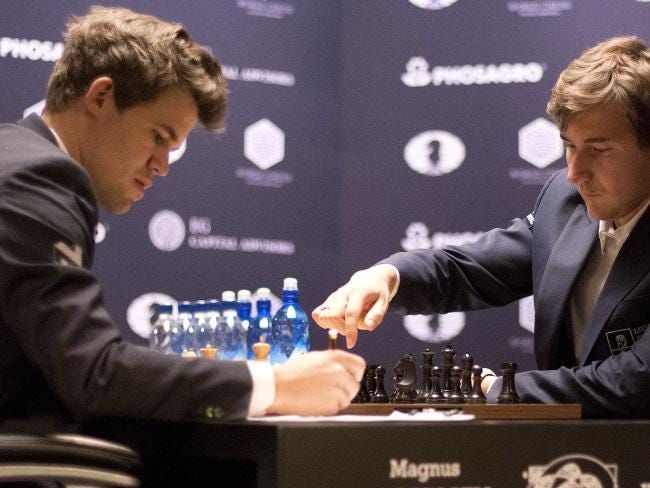 PRESSURE doesn’t begin to even cover it.
On Wednesday in New York City, two men will face off in a tie-breaker for global glory.
At stake is the title of World Chess Champion and bragging rights for a nation over its toughest rivals. This time, the match will be played out between a Crimean and a Norwegian against a backdrop of high drama between Russia and the West.
Crimean Sergey Karjakin, 27, will take on Norwegian Magnus Carlsen, 26, in the battle that is expected to be followed by more than one billion people online, including Russian President Vladimir Putin.
The pair will play four tie-breaker games before moving to faster matches and an ultimate “Armageddon game” if no winner is produced. It comes after three weeks of playing failed to produce a decisive victory.

Does it get any better than this, folks? We got the World Chess Championships taking place in New York City today and ONE BILLION FUCKING PEOPLE are expected to watch it. I know that we use this phrase a lot around here but one billion people watching anything is BANANAS.

I didn’t even know this competition was going down until I was driving this morning and I heard the phrase CHESS ARMAGEDDON come across the radio. I’ll watch any type of Armageddon. Doesn’t matter. Chess. Checkers. Connect Four. Chinese Checkers (sorry if this offends). Risk. Life. Doesn’t matter.

Apparently, this Norwegian Magnus Carlsen is supposed to be the highest rated Chess Grand Wizard (sounds kinda racist) of all time. He was the heavy favorite but the Russian dude has performed out of his mind to the point that the Russians are being suspected of cheating. Never heard that song and dance before. The shocking part of this whole deal is that right after NPR said ole Magnus was the highest rated Grand Wizard, they said he was also a model. Get the fuck outta here. You can’t be the smartest dude in the room and sexy enough to be a model. No way. 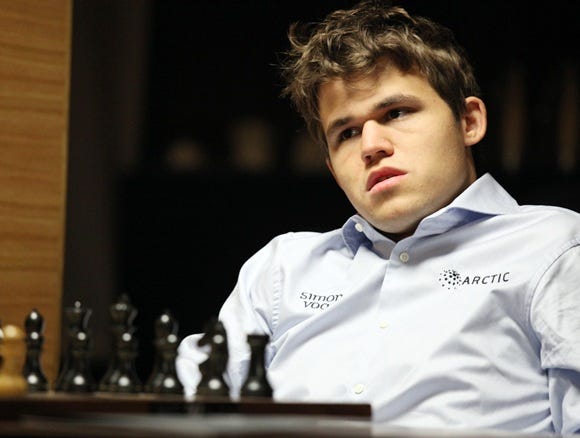 I was right. This dude can play his nuts raw at Chess but he doesn’t look that good. He’s not terrible but he’s far from model material. Just one man’s opinion, though.

They were wrong on the viewer estimates. Gonna be one billion and one at least.

PS: Sorry if this is a reblog. Lots of the writers are trying to get their chess blogs in and things get lost in the shuffle.