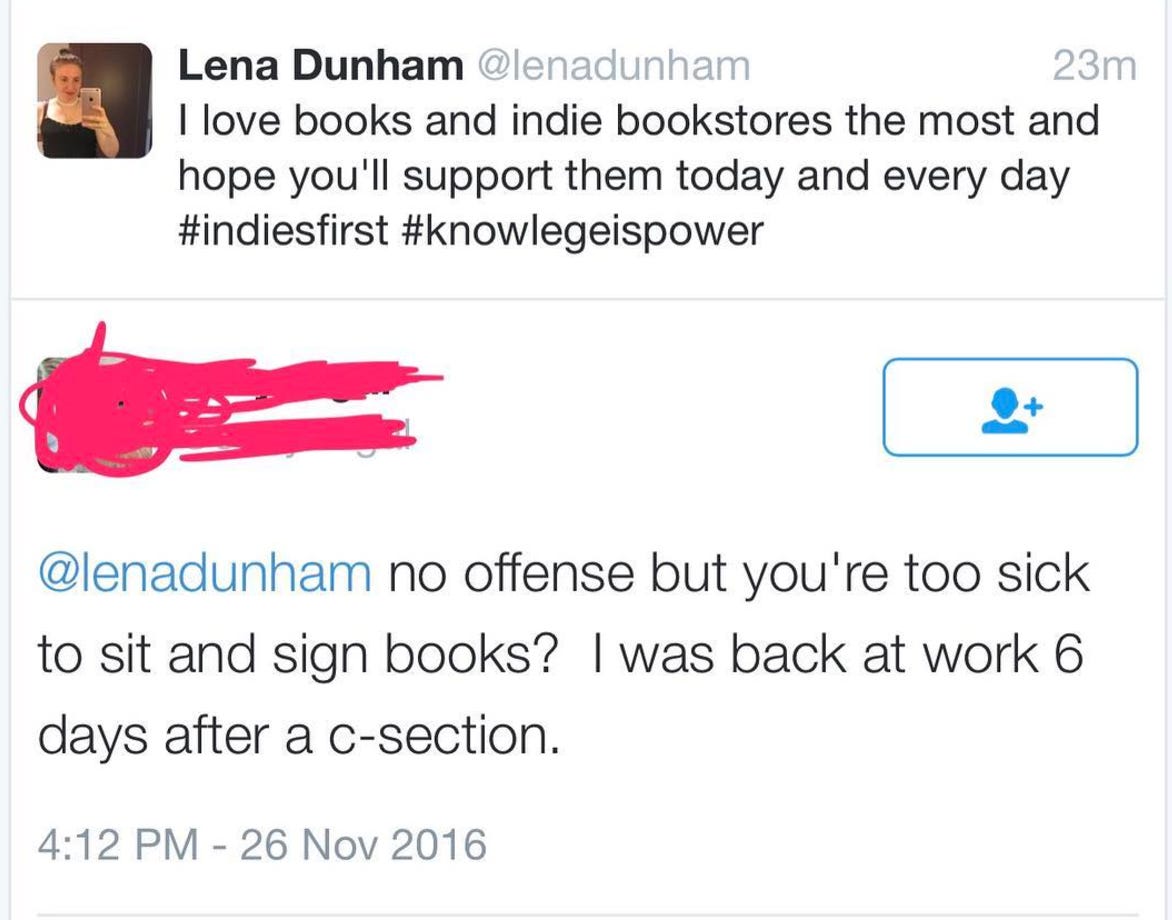 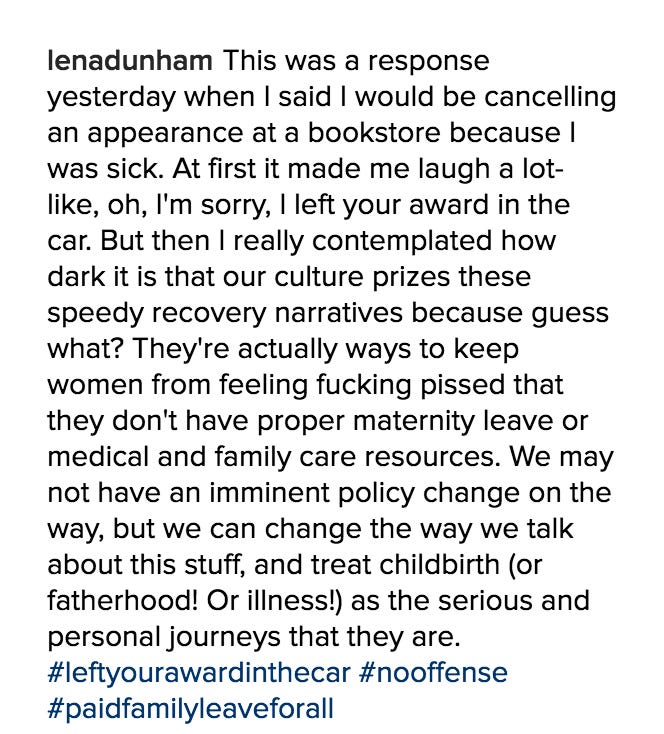 Yahoo - While many Americans were sleeping off their turkey dinners and Black Friday shopping bonanzas, Lena Dunham took a sick day over the weekend, canceling a book signing due to illness. A fan, however, was having none of it, and took to Twitter to tell Dunham as much — leading the actress to share the tweet, and her personal reaction to it, on Instagram. In it, the fan attempts to sick-shame Dunham, undermining her for not feeling well by asserting that illness is no excuse for canceling a book signing, especially since the fan herself was back at work, she claims, a mere six days after giving birth via C-section. Dunham shared an image of the tweet and commented that it made her really think about “how dark it is that our culture prizes these speedy recovery narratives” — especially since, Dunham asserted, heralding such narratives is nothing more than a token gesture that helps perpetuate a cover-up of the fact that women in the United States “don’t have proper maternity leave or medical and family care resources.”

This is it. This is it, folks. This is the one. This is the post where the rest of the general public joins me in my crusade against Lena Dunham. This is when all of the world realizes just how much of a dramaqueen asshole she is. Just how much she cant shut her yapper. Honestly what the FUCK was this post about? I had to double check that it wasnt fake. If The Onion were to concoct a fake social media post trying to convey just how overly dramatic Lena Dunham was, this is what they’d come up with. I mean, “sick shaming?” That’s absolutely 100% not a fucking thing. And more importantly, you know what I’m sick of? Shame Shaming. When did shame become such a bad thing? Sometimes you should be ashamed. If you’re really fucking fat or really fucking slutty, you should be ashamed. Let society have shame back!

But, anyway sick shaming ain’t a thing. How we went from “I don’t think you were sick enough to miss a book signing” to “women are unfairly rushed back to work from maternity leave,” I have no fucking clue.

I didnt think it could get any worse than the cafeteria sushi cultural appropriation. I thought that was the peak of Lena Dunham being offended and upset about virtually anything and everything. But creating “Sick shaming” and relating her getting a cold to a change in the paternity leave policy of America has gotta be the most exhausting thing I’ve ever seen. You just absolutely CANNOT take anything she says seriously. If everything is offensive and upsetting and racist and prejudice, then nothing is. If sushi and sick days make you act like its the end of the world, then you just become the Bag Of Milk Who Cried Wolf.

PS – I have not clue what all that “I left your award in the car” shit is about? Is that a joke going over my head? A reference I dont know? No clue what that tub of whipped cream cheese is talking about.