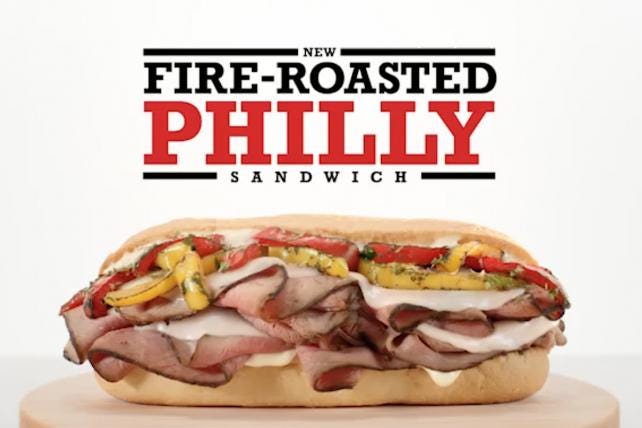 [DISCLAIMER: yes, I am still 100% going to eat it at some point. But I’m not gonna be happy about it]

Let me tell you something, folks. I haven’t been this fired up about anything since that little bitch Matilda decided to talk shit on the City of Brotherly Love last week. I would give anything right now to be in the presence of an Arby’s executive so I could take my hockey stick and bash him repeatedly in the face until it looks like he just went 10 rounds with Apollo Creed. What in the hell am I looking at here? Where did we go wrong? What did Philly do to deserve such a thing?… okay, maybe we never really deserve nice things but that’s neither here nor there.

What we have here is a monstrosity. A travesty of biblical proportions. The Fire Roasted Philly from Arby’s is as much of a Philly Cheesesteak as Marlins Man is a United States Army Veteran. Layer angus steak? Go fuck yourself. Provolone cheese? Go fuck yourself. Red and yellow peppers? Go fuck yourself. Roasted garlic aioli? I don’t hate the idea but still… go fuck yourself. I’m not even that big of a cheesesteak guy and I’m beyond offended by this creation. A cheesesteak is supposed to be Grade D meat on a roll smothered in either cheese whiz or American cheese. Then you throw a load of fried onions on that bitch, wrap it up and it’s good to go. Nothing more, nothing less. You wanna get crazy? Throw some hot peppers on there and knock yourself out. But roasted red and yellow peppers? What is this, a cheesesteak for your baby sister? I guess I finally know how all those pussy millennials who are easily triggered and need safe spaces feel.

P.S. – this is pretty accurate. 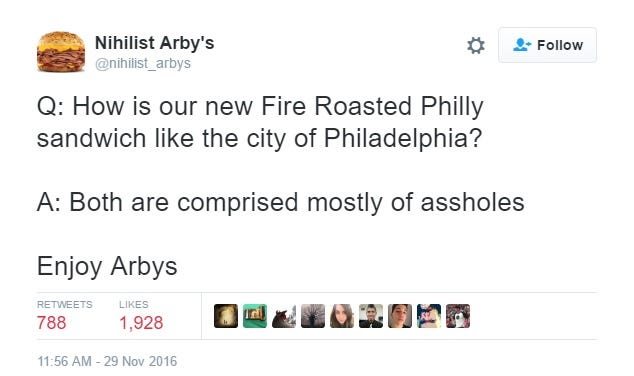