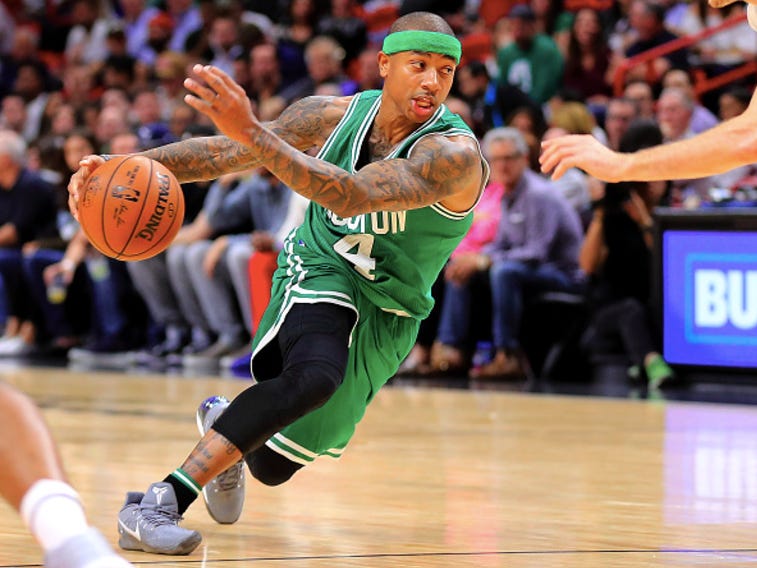 Never before had a November 28th game been so absolutely crucial to the success of a season, but after a tough loss to the Spurs and a few days off, apparently this was a huge game for the Celtics that under no circumstances should any player on the roster even think about missing so I suppose it’s good they won. The reality is, MIA is plummeting, and didn’t even play a full team. After early losses to bad teams, it’s reassuring to see the Celts have figured their shit out and are starting to beat the teams we expect them to beat. What we got was really one of the better offensive performances of the season, and I can’t help but think back to the times last year when this team couldn’t score and be more pleased. This is a Celtics offense we haven’t seen in quite some time, so it makes you wonder that if they could just get their defense to be consistent, maybe they have something.

Sign of the times in the NBA for sure, but this team ranks 10th in 3p% at 36.2%. It’s really something foreign for this franchise and time will tell if it pays off long term, It did however pay off last night, so let’s talk about it.

– You read the headline to this blog. We’re starting with our fearless leader, Isaiah Thomas. Isaiah had an interesting night, which included a spotty start. It’s not surprising, because Isaiah this season has struggled most on 2 days rest (37% shooter). His first quarter consisted of six shots in which he only made two (right on par with his season first quarter avg) he still was tied for the team high at +4. Then the second quarter happened, and he went into halftime 2-9 (0-5) for 4 points and 5 assists. Despite the lead the Celtics had, Isaiah was having a rough night.

But that’s the best part about Isaiah, he doesn’t quit.

He came out blazing in the third quarter, leading the Celts with 12 points. His offensive arsenal was on full display, whether it was a corner three, a spot up in your face three, or this RIDICULOUS inside out crossover

Hold on I’m sorry…take another few seconds and watch that GIF a few more times. Treat yourself.

OK back to Isaiah, his play down the stretch of this game was a major reason the Celts were able to hold on. Once they got into the fourth quarter, Isaiah pulled out his most dangerous lesson, his ability to get to the FT line. This is something I don’t think we talk about enough, because it is a legitimate weapon. Isaiah took nine FTs in this game, seven came in the fourth quarter, and all of his 9 points came with under four minutes to play. When this team needs a closer, Isaiah is stepping up in that role, he’s just doing it in a unique way. The reason the Heat weren’t able to make that final run was because Isaiah kept them at bay.

He finished the night 7-23 (2-10) shooting which isn’t great, but his 25 points 4 rebounds 8 assists and 1 turnover sure as shit is. From a terrible start to a fantastic finish, pretty much sums it up.

Oh and before we move on, how could you not love this sequence

– But he didn’t do this alone, as a team almost everyone played well, but I want to shift gears and spend a little time talking about Jae Crowder. We’re starting to see him round into the kind of shape he was to start the year. His last three games have been beyond solid. Over that span he’s shooting 55% from the field, 46% from deep, and averaging a solid 16/3 while still playing under a minute restriction. It’s no surprise the Celts have won 4 of 5 since his return and when you watch him play, he is showing no signs of favoring that ankle. His shot appears more confident which tells me he is getting good lift, and the results show it. When Jae has fucked up ankles he can’t shoot, when he’s feeling good, he shows you how much he’s developed his offensive game.

There is one thing that still scares me when it comes to Crowder, and it’s how he repeatedly puts himself in harms way when he takes a three. On this corner three (which he made) he’s jumping into the legs of his defender, and anytime I see this 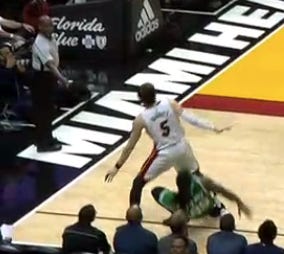 I feel like Jae is just asking to step on someone’s foot again and re-sprain his ankle. All I want is a healthy Jae Crowder because we all know what it means for this team. Please join me in continuing to pray.

– It helps you have a career year when you never come off the floor, and Avery Bradley almost never came off the floor last night. His 39 minutes lead the team and he rewarded Brad with a solid 18/6 on 50% shooting. With Avery it was more of the same, he got off to a good start and lead the starters with 5 first quarter points, and Brad did a great job of running him off screens and getting him easy looks, like that ATO midway through the second quarter for example. You’d never know it because he is a silent killer, but Avery lead the team with a +12 last night, and when you look at it, there might not be a starter who has benefitted more than Avery with the return of Jae.

– Listen guys we have to be fair. If we are going to kill Tyler Zeller for the hundreds of frustrating things he will do in a 2 minute shift, we need to give him proper credit when he plays pretty well. I mean 10/7 on good percentages with a block is about as good as I could want given his recent play, and I have an idea as to why it happened.

Remember last year when Zeller would play well, and then never play, then would randomly get minutes like a week later and play well? That’s what’s going on here. Zeller hasn’t really played since Horford came back (under 10 min since 11/18) and here he was playing 25 minutes and giving you something. Now Horford is back so we don’t have to worry about it, and we’ll see what Zeller looks like in another week.

– I mentioned the offense flourished, and the numbers don’t lie. I’ll take 48/40% splits and 112 points with just 9 turnovers every day of the week and so should you. 26 assists on 40 baskets (65%) the Celtics moved the ball, and when they do that they make their shots. When those shots are primarily threes and those go in too, you almost can’t beat em.

– FINALLY, some bench production. Smart’s 10, Kelly’s 14, my friend Jonas continued to not miss a shot and go 3-3 (1-1), it has been a long time since this many people on the second unit played well. Marcus was especially huge considering all his points came in the fourth quarter, but what I liked most was everyone’s aggressiveness. When you play these bad teams you never want to have to ask your starters to win the game for you twice, so it was nice to see the second unit didn’t fuck things up.

– Show me by a show of hands who predicted rebounding battle would be within 1 rebound. If you are raising your hand you are a liar. In reality, a 41-40 MIA advantage was maybe my favorite part of the night.

– Oh and we’ll get to how bad the defense was in this quarter, but after a 21 point 38% shooting first, the Celts came out with a 35 point on 54/64% shooting third. The Theory never lies. Know it. Love it. Embrace it. Accept it.

– So let’s talk about that third quarter defense. Pretty pathetic wouldn’t you say? You have a team on the ropes, down 17 points at the half ready to call it a night, you then come out blazing offensively and do you blow the game open? No, no you don’t. You allow MIA to score 42 points and shoot 66% from the floor. The Celtics are lucky this quarter didn’t lose them the fucking game because when I say no defense was being played, that would be insulting to people who don’t play defense. When I say no one, I mean it. Avery, Jae, Isaiah, Marcus it didn’t matter. Three Heat players had double figures in the quarter and that just can’t happen.

– Hassan Whiteside > Tyler Zeller I think we can all agree on that one.

– To be honest the Celts were really outplayed the entire second half. I don’t want to say they took their peddle off the gas, but they didn’t exactly close this game in the most idea fashion. I shouldn’t have been sweatin’ and yet there I was.

– Now I need to vent for a second. I am very well aware that about 98.4% of people had zero problem with Al Horford missing last night’s game due to the birth of his child. But that 1.6%, you need to shut the fuck up. You are pathetic, and it’s one thing if it’s some 16 year old on Twitter who wants to troll, that kid is just an asshole. It’s another thing when this happens

If you truly think that just because Horford makes a certain amount of money, that missing one game in late November against the Miami Heat who are tanking, is more important than being with his family the days after they have another baby, you need to reevaluate your life. If you also don’t think that Brad & Danny probably TOLD Horford he should stay in Atlanta you clearly don’t have a brain either.

I don’t care that he missed 11 games for a concussion. You don’t mess around with head injuries so when I hear people throw that in as another reason he should have played last night my brain explodes. This has NOTHING to do with his “will to win” or being a “max player”, it’s called being a goddamn human. People wonder why players don’t want to come to Boston well shit, one minute they want to trade a 26/6 player, the next they are mad when a guy has a baby. A pathetic look if there ever was one if you ask me.

Having said that, we will end on a positive note. At 10-7 the Celts remain right in the thick of things as we approach a quarter of the way in. After a tough start to the brutal month of November, the Celts have finished it strong, and a look at the schedule shows DET/SAC/PHI on deck, so there is reason for optimism.

How bout Anna Horford come in strong. Love it.