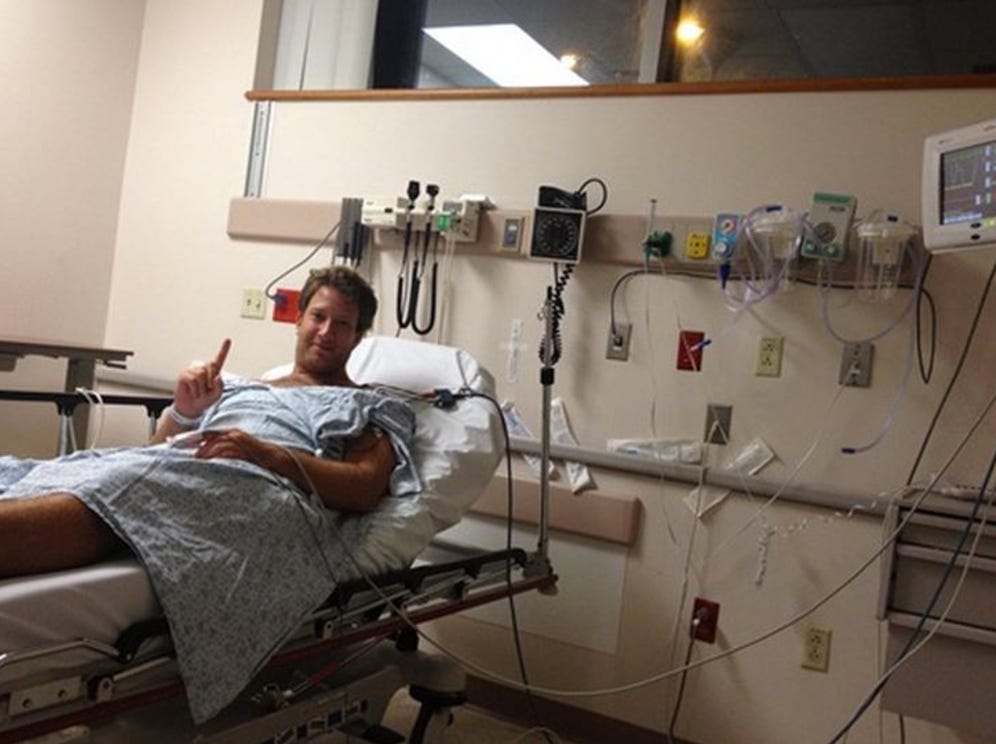 As well all know, Dave Portnoy (known to his online following as “El Pres”) had a heart attack in 2012. You can read that blog here. Just kidding, the DevNest destroyed that blog. So basically how I remember it, he was walking up a single flight of stairs, and was so disgustingly out of shape that he rushed himself to the hospital because he thought he had a heart attack. If I remember correctly, it turns out it wasn’t a heart attack, he just ate so much buttered popcorn that his body gave him a big ol’ fuck you and decided to give him a little bit of a scare.

I play hockey about once a week. Roller hockey, that is, because ice is saved for people with size, speed, and skill. So I play outdoor roller hockey, and I enjoy it. It’s laid back, yet competitive. Good times all around. And we had a playoff game yesterday at 9pm.

Well, now I want you to think what yesterday was. It was the first day back after Thanksgiving. The first day back after 5 straight days of heavy drinking and taking carbs (stuffing) and putting them on carbs (dinner rolls) and then smothering the entire thing with gravy, while eating carbs (sweet potatoes) on the side. And mixing that shit around with gravy too. I gained, just a rough estimate, 100 pounds in 5 days. Probably more like 10 or 15 but you get the idea. It was an unhealthy venture, to say the least.

So now I want you to think about where I work. Barstool Sports dot com. Our office is a travesty if you want to keep yourself in any sort of shape or maintain any sort of reasonable diet. Sure you can tell yourself “diet starts today” but then we have 5 dozen of the freshest, most delicious bagels delivered 4 times a week. Donuts hanging from the rafters. More Natty and Oakheart than can fit at the bar. Seriously. We have a closet that literally just has 100 more cases of rum. Pizza gets delivered around the clock. And if you stay late, Dave accidentally orders his Seamless order to the office routinely, so there’s always more food getting delivered even if you don’t want it. And it’s not just Dave who does it- One time one of Brett’s friends ordered a chocolate milkshake and pancakes to the office at midnight and you’re god damn right if a chocolate milkshake and pancakes fall into my lap at midnight, I’m eating all of it.

It’s all coming together now right? Yesterday was bagel Monday/donut Monday/Dave pizza review Monday/telethon Monday. So I had 3 donuts, a bagel with cream cheese, a slice of pizza, and then a double cheeseburger with fries at about 7. Gotta fuel up to answer them phones. And then to play the hockey game.

We won the game. I played well (enough). But midway through the 3rd period, I started blacking out. It was a weird feeling. Everything was getting quiet and I was seeing everything very clearly, but it was like my brain wasn’t understanding what was going on around me. That’s the best way I can describe it. I got home, showered, and then that’s when I realized I still hadn’t caught my breath. My heart was beating a million miles a minute. I was trying to take deep breaths and all that shit, but I couldn’t get anything to stop this heart attack. I thought about looking up symptoms or whatever but when you’re having a heart attack all you can do is kinda lay there and wonder if you’re actually having a heart attack or not.

Needless to say, it never ended. I finally fell asleep around 3am. Woke up at 6:30 am, heart still racing. Maybe got like 15 more minutes of sleep somewhere between then and now. Still can barely breathe. Pretty sure it’s curtains for me.

Or a huge wakeup call that I need to stop eating like shit, maybe join a gym and hop on an elliptical every once in a while, and stop eating like a goddamn monster every single day. I’m not 22 anymore, I’m 28 going on 70. I can’t walk without my knees aching, can’t drink without being hungover for 2 days, and can’t play inline without having a heart attack. Getting old sucks, I don’t recommend it to anyone.