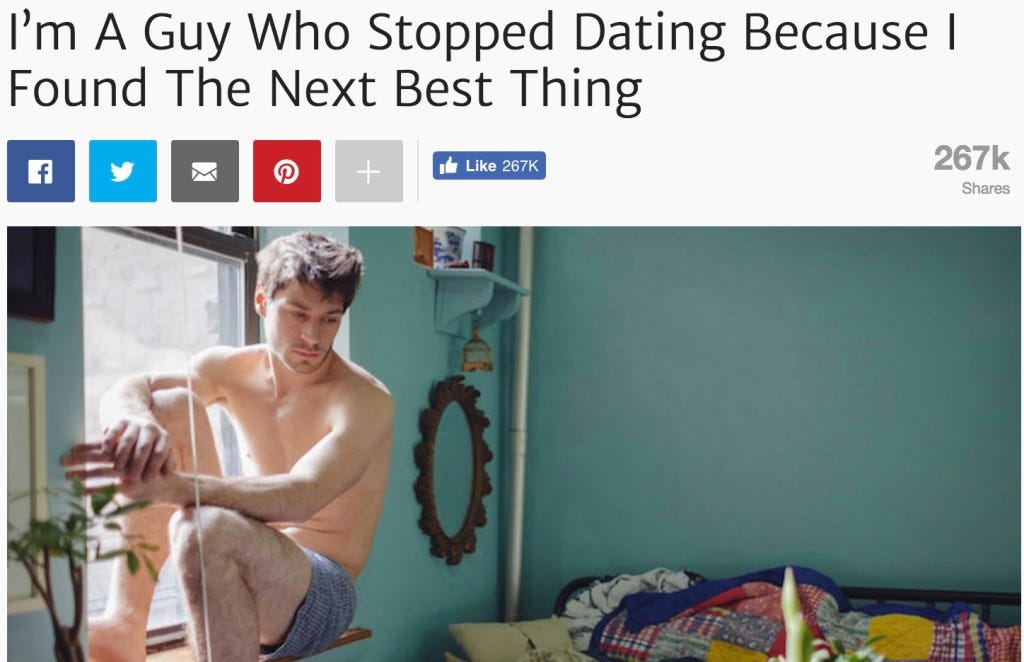 Elite Daily – Yes, I’m a guy, and yes, I’m saying men ruined dating. Why? Well, for the most part, men are devoted players with phobias for commitment and settling down. They’re devoted to the method of being pick-up artists while tallying the number of times they scored along the way.

For many, mobile apps designed for hookups have become their hunting grounds. They scout the nightclubs in search of their latest one-night conquests. They study the field, armed with their well-crafted pick-up lines, designed to enchant their selected targets. If successful, they achieve what they set out to do only to have no interest in seeing their selected targets ever again.

As a result of my newfound resolution to discontinue dating, I decided to try something different, to live my life by learning new life skills, which became easier when I stopped focusing on dating. I made a list of the things that always interested me and I committed to them. I take Argentine Tango classes on Tuesday nights; I learn to salsa dance on Wednesdays and Friday evenings; I study for an upcoming exam for a new career. I pursue my writing, and I plan to start stand-up classes. In my downtime, I enjoy a craft beer while watching my latest interest on Netflix.

I deleted my online dating profiles and mobile apps from my phone. Going forward, I intend to continue this while keeping dating in the past.

I’m also aware love may, someday, find me. Perhaps, Ms. Right and I will cross paths. I just have no intention to pursue dating, as I’m disenchanted with the whole process. I don’t feel bitter toward or resentful of couples; I’m very happy for them and I hope their relationships flourish to everlasting love.

This article is going viral on social media right now a while after it came out (and honestly the whole thing is worth a read so you can maybe get my palpable disdain for this dude) and usually that means the piece of speaking to some sort of thing stirring in people’s minds now, a lot of people wrapping up their years who are cynical about the dating game and how futile going out there and chasing love or some reasonable ejaculate-based approximation of it can feel sometimes. Vanity Fair covered it at length previously how the dating apps in particular can be a drain on you psychologically and set some sort of unrealistic expectations.

But fuckkkkk this guy for being a quitter and acting like he can just walk away from the process. Yeah personal enrichment is great, take your salsa lessons and undoubtedly hilarious stand-up comedy classes. But when you start saying that you’re closing yourself off from a major part of basic human needs to do those things, you’re completely missing the point. Sure dating is sometimes like smashing your head into a brick wall, but it’s your job as a member of society to keep clanking your skull against it, brick by brick, until you sew all your oats and finally Kool-Aid Man your way through into a life of *gag* enriching fulfillment through commitment and family.

That doesn’t mean you can’t deemphasize dating as a priority or at least get less tunnel vision about finding that one and only. This dude claims his crisis is from turning 30 and I was there too, moved in with a girl before we were both ready because leases were up and it seemed like the adult thing to do, ended up immediately turning claustrophobic (at a time where admittedly my Barstool life helped make the cold world of DM sliding a little warmer), and then had to unpack both my life and hers because I made a hasty decision. You make these kinds of dramatic life choices as you get older, things that seem right for you are more of a mirage than a valuable life decision (there’s a reason the divorce rate is around 50%), and that’s just what this guy is doing in his own way by deciding to pull himself out of the game. Acquiring new skills is great, loving yourself is great, but being the weird single 35-year-old dude who’s basically asexual but way into Argentine tango is a losing proposition for a dude who’s just scared to live like the rest of us. You can nut up and keep getting out there or you can be this dude and take your balls and go home. Don’t be this guy.

PS I hear there’s some sort of cool underground dating podcast going on tonight at 9PM on Smitty’s Facebook page that’ll be worth a listen. We’re talking dating apps and Mikey Flash and Tex’s pickup lines and if the last episode is any indication, I’m confident we’ll be bringing heat: