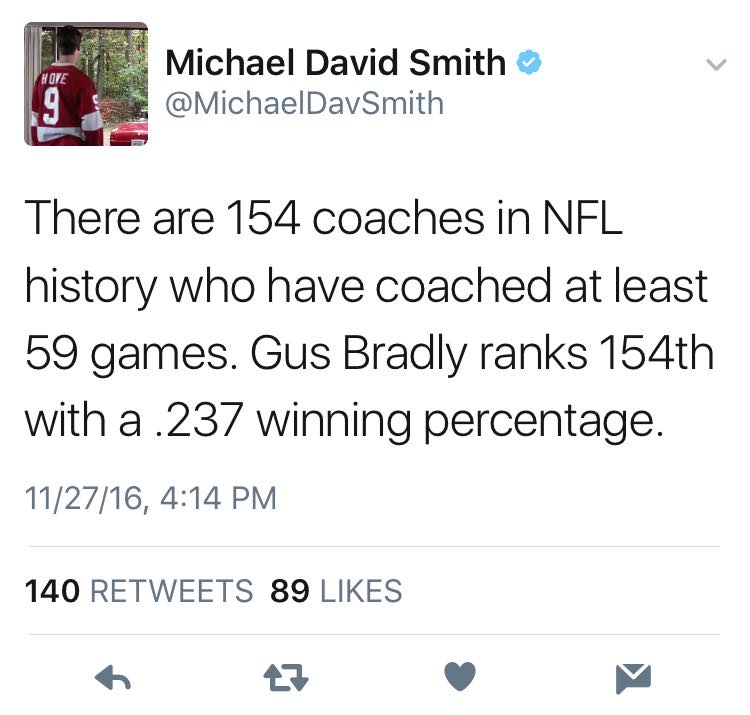 Amazing. Simply amazing. Each and every week I’m amazed at how the Jaguars lose. It’s not that I’m surprised that they lose; it’s that they lose in new and dumber ways.

This week they had forced turnovers overturned, forward progress calls which were actually fumbles go against them, and they can’t manage the clock to save their lives.

Gus Bradley entire coaching resume was on display over the course of three plays yesterday.

On the first play, the Jaguars had just punted the ball. The punt traveled like 46 yards and the Bills had the ball at around the 40-yard line. An offsides penalty was called against the Bills. The Jaguars accepted the penalty, even though it didn’t give them the first down, and punted again despite the fact that their punt team had just covered a punt. When they punted again, it was returned inside Jacksonville’s 30 and the Bills scored like three plays later.

At the end of the half, the Bills had 4th and 1 from the Jaguars 25. The Bills had brought on their kicking team to kick a field goal. Gus Bradley calls a timeout. Rex brings back the offense and the Bills score a touchdown two plays later. That particular sequence of events has happened so many times over the last 4 years.

The Jaguars haven’t always been bad. They’ve been horrific under Gus Bradley, the worst coach in NFL history, and it’s waaaayyy beyond time to fire him. I can’t take much more of this shit.