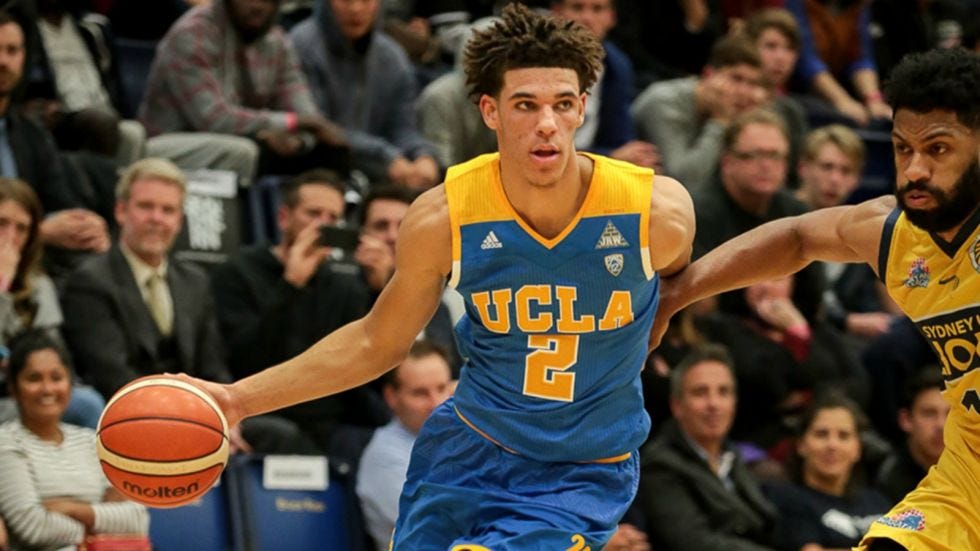 Yes, that Ohio State/Michigan football game was insane and what everyone wants to talk about. Howevah, the college basketball season has been wildly impressive so far and if you haven’t paid attention to that sport yet, you should probably look into it.

This will be a quick hitter blog, getting you caught up on names and teams you need to know that have looked the part so far this season. We’ll also hand out some superlatives from Feast Week, which is one of the best weeks of the season. I’ll miss the 11am sweat or the top-25 matchup at 2:30 in the afternoon.

The Top-5 Teams Are Starting to Separate Themselves

Right now, there looks to be a group of five teams – Kentucky, Villanova, Kansas, Duke and North Carolina – starting to separate themselves from the rest of college basketball. This group is perfect for college basketball as you have the 4 biggest names in the game plus the reigning champions. This group are the most complete teams, where there are minimal questions to ask when it comes to them. Most of them revolve around consistency of outside shooting or the play of one singular person.

Injuries Are Keeping Big Names Off the Floor

UCLA catches a lot of heat – mostly because they have two guys with the last name Alford and people tend to not like those two. But, they are one of the most fun teams in the country as they look to score 100 points each game. Not to mention they have the most impressive freshman so far in Lonzo Ball, who shoots like Kevin Martin, but his passes are unbelievable. In the game against Texas A&M last night, the Bruins needed him to take over late. He hit a couple threes and got his teammates going with drive and kicks. He’s not going to be a top-5 pick in the NBA next year, but he’s a lottery pick and already the most fun player in the country to watch.

You Still Can’t Score on Virginia

Ever since Tony Bennett took over Virginia, the packline defense has become the toughest thing to score on. That’s still the same. Despite losing Malcolm Brogdon and Anthony Gill to graduation then having to kick Austin Nichols off the team after 11 minutes, the Cavaliers are still No. 1 in the country on the defensive side of the ball. No one has scored more than 52 points against them.

Nobody had a better start to the season than Baylor. After starting the season unranked, Baylor got a home win over Oregon before heading to Atlantis for the Battle 4 Atlantis, which everyone assumed would be Michigan State vs Louisville in the title game. The Bears beat VCU by 8, Michigan State by 15 then came from behind to beat Louisville by 3. They currently sit No. 10 in KenPom and look to easily be the second best team in the Big 12.

Nobody is Going Undefeated

This was brought up before the season started when people wondered if Duke could go undefeated. Besides not being healthy, the ACC is too loaded for that to happen. Big name schools are playing other big names in college now so it’s making it highly unlikely to see anyone go undefeated. Take a look at the big 5 I listed earlier. Kansas still plays at Kentucky, UK still has UCLA, Louisville and Kansas, Duke has Michigan State and UNC, Nova still has Virginia. No one is going undefeated.

Who in the Preseason AP Top-15 Doesn’t Look Like a Contender?

I think the answer here is pretty simple – Michigan State. They will absolutely get better as the season goes on, but right now that roster is a little bit of a mess. They need to find consistency on the offensive side of the ball outside of Miles Bridges – I’m looking at you Eron Harris. They also need to start getting better on the boards. I get they are undersized, but they are just getting flat out beat when it comes to rebounding. I’d also throw Purdue and Arizona as the next two in this list.

Who Outside the Preseason AP Top-25 Looks Like a Real Contender?

We mentioned Baylor, who didn’t even receive votes in the preseason poll, so we’ll rule them out. I still think Michigan is the team that looks the most like a real contender outside of the preseason top-25. Its only loss is a true road game to South Carolina and we saw what they are capable of in the 2K Classic when they blew out Marquette and SMU. There’s balance to this roster and more importantly a ton of depth. If they stay healthy they are the best of this bunch.

I’ve harped about this on Twitter all season. The goal of college officials are correct. They want to call the game tight to start, with the anticipation and hope players adjust allowing for more freedom of movement. But, that’s not happening. Too many games we see starters and big name guys sitting on the bench for 17 minutes in the first half because refs love to hear their whistles. To make matters worse they gave two technical yesterday for a guy yelling ‘give me that shit’ on a block. If that trend continues every player will get ejected.