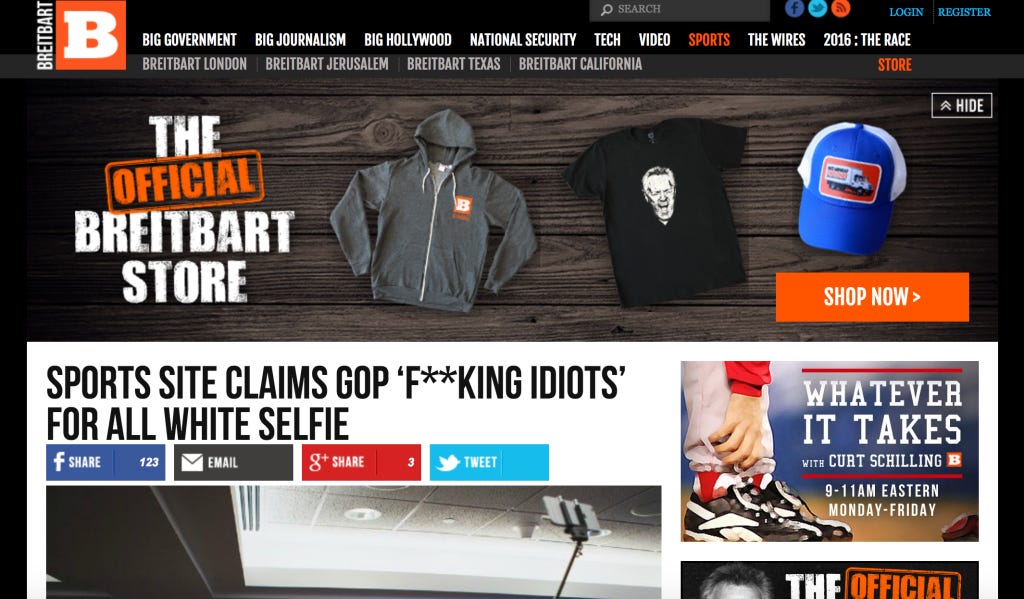 So I guess Breitbart (the Nazi site) took offense to me saying that the GOP was a bunch of fucking idiots for posting a selfie of entirely white people. Or maybe they didn’t take offense? I honestly can’t really tell because there’s absolutely no opinion in the article. It just acknowledges that I said these things. Which is true, I definitely said the government of the United States of America shouldn’t be entirely all white people. I stand by that even at this moment.

But what really stuck out to me, aside from Breitbart’s extremely tepid and boring takes, is the fact that they won’t print “fucking”? They asterisk out bad words? Listen, I know you Nazis love to hand out stars but I think we’re dangerously close to a safe space here. Don’t paraphrase me. I choose my words very deliberately and I called them fucking idiots, not f**king idiots. Don’t make me look like a little sissy who’s scared to speak my mind just because you lugenpresse sons of bitches are. It’s pathetic, really. The most prominent website for Nazi salutes is too soft to say the F-word and if you ask me that’s the most Pussification of America story I’ve ever heard. I say fuck, I speak English, and if you don’t like it then you can get out.

PS – I kinda understand the author not laying into me too hard/hard at all. When you’ve got dudes in the comment section handing out roasts like this it’s best to just shut your mouth because they’re gonna make you look bad.

PPS – My mom thinks I’m fighting with Nazis because they were mean to me about my name.