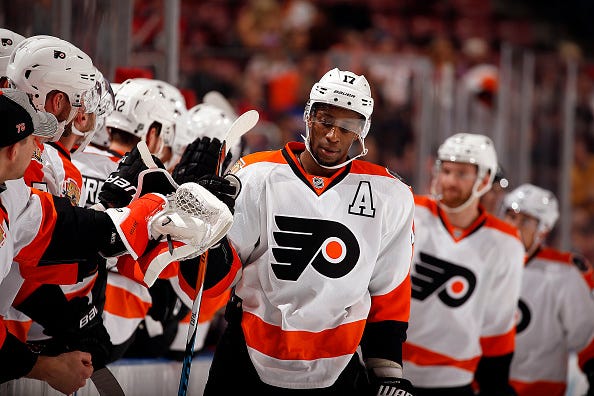 Despite a shaky 1st period, the Philadelphia Flyers were still able to go down to Florida and hold a lead after all 3 periods last night. Something that has seemed nearly impossible for these jackasses to do so far this season. There were no glaring defensive breakdowns after the first 20 minutes even though they were out shot in every frame. A 3-1 win over a good Panthers team. 2 points and now heading into Tampa Bay today with a little momentum. Seems like a perfect scenario, right? Well… wrong. Because in the process of beating Florida, the Flyers lost Sean Couturier.

So far it sounds like a left MCL sprain for Coots, who won’t get reevaluated until Saturday. At this point I don’t think it’s necessary to stress how important Coots is to this lineup. We’ve seen before how losing him for an extended period of time completely changes the complexion of this team. The Konecny-Couturier-Voracek line has been the most productive line so far this season and we all knew before Game 1 that the key to this team’s success this year would be to keep all of those guys healthy. MCL sprains are weird. They could take a few weeks to heal, they could take a few months. So who knows how long Coots will be out for but now the Flyers have some moves to make. Hopefully this means they’ll be calling up Scott Laughton because even though the kid has been a disappointment so far in his career, he’s in the last year of his ELC and will hopefully come in with a chip on his shoulder the size of Wayne Simmonds’ balls. Because speaking of Simmer….

That’s goal #10 on the season so far for the Wayne Train. Only Laine, Grabner, Crosby, Scheifele and Hossa have more. 1 and 1 last night from Simmonds and he was flying around all over the place doing what he does best–wreaking havoc and pissing people off. Most of the goals you’ll see from Simmonds come with a large side of grease. He’s a big body who parks his ass in front of the net and works long shifts on the cleanup crew. But every once in a while he’ll have a game last night to remind everybody that he’s a skill guy too. You can’t fight him, you can’t slow him down, and as a goalie, you don’t have a chance when he gets his hands free. He’s the best 5-tool player that hockey has to offer.

Get That Monkey Off Your Back

When the Flyers announced they signed Dale Weise on opening day of Free Agency this summer I thought to myself, “eh okay, not bad, whatever”. And then when they announced that they signed him for 4 years worth nearly $9.5 million, I thought maybe they forgot to delete Paul Holmgren’s password and he was able to still get into the servers. And through 15 games as a Flyer, Dale Weise hasn’t done much to prove that he was worth that contract. Now he hasn’t been overly terrible. Hell, I don’t think he’s even been that bad at all. But what he has been is a gray guy. A guy who doesn’t do anything too poorly, but doesn’t do anything great either. He’s a guy who you never really remember if he was playing in that game or not. Which I guess isn’t the worst spot to be in but I don’t think that anybody ever really wants to be a gray guy. It seems like he works his ass off and he seems like one of the good guys so it was good to see him finally pot one home last night for his 1st as a Flyer. You see that goal celebration and you see a man who just had the weight of the world lifted off his shoulders.

Again, I don’t want to be the guy who says this but the Michal Neuvirth injury is quite possibly the best thing to happen to Steve Mason. 38 saves last night and he was 11/11 against Florida’s powerplay. It looks like he’s finally getting into his groove and obviously things are easier on him now without having to worry about an off-night sending him to the bench. It’ll be interesting to see what Hakstol decides to do here. Obviously Mason is going to get the Black Friday game against the Rangers. Does he keep him in tonight against Tampa or does he give Stolarz his first NHL start. I think you have to keep the hot hand rolling and keep Mason in for tonight and Friday. Then you let Stolie go at home against Calgary. But Hakstol has proved over the past week or so that he does whatever the fuck he wants so I guess we’ll just have to wait and see.