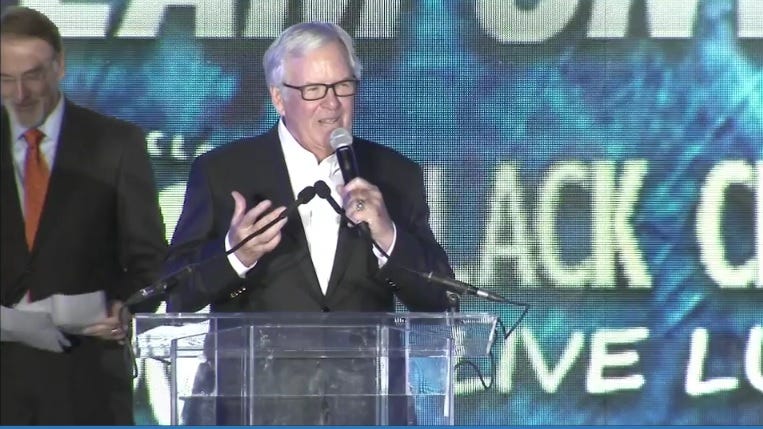 To say that things didn’t quite go according to planned last night at the Las Vegas Something Knights name reveal would be a heavy favorite for understatement of the year. Las Vegas is the entertainment capital of the world. There are countless shows that go on every single night. So naturally, Bill Foley wanted to put on a show last night to announce the name of his team after 5 long months of waiting. Unfortunately, it appears that Barstool Sports [dot] com lent them some of our tech people as the video that went along with the name reveal to show the journey they went on over the past 5 months to come up with the “perfect” name.

Awwwwkward. But don’t worry. The tech nerds got right on the case and after a few minutes of stalling, they were able to fix the video and get it working right? Wrong. It happened AGAIN. Poor Bill Foley stuck up on stage with his thumb up his ass the whole time trying to tell the crowd that at least the team won’t be as shitty as their technicians. Even those little snot-nosed bastard brats up on stage were chirping at him. I think the only thing that could have possibly made this worse is if someone threw his most recently viewed pornog up on the screen. But even that would be something. Anything at that point would be better than a placeholder.

I mentioned this last night but I guess they had the website launch synced up to the time they were expected to announce the name. But since those bozos couldn’t get it right, the official team website went up before the name reveal.

So now I guess we look into how this happened. Who gets fired? Did another team hack into the video feed? We know that George McPhee is the GM of the Golden Knights. We know that he used to be the GM of the Washington Capitals. We know that the Capitals have plenty of Russians on the roster. As one connect-the-dots guy to another, I think all signs are pointing toward Putin. That son of a bitch. He knows the KHL is struggling and he hates seeing the NHL expand their brand. It only makes sense. So while we prepare to go to war with the Russians, the Golden Knights will prepare to figure out how to hockey better than they video. At least their fans already have the right idea.