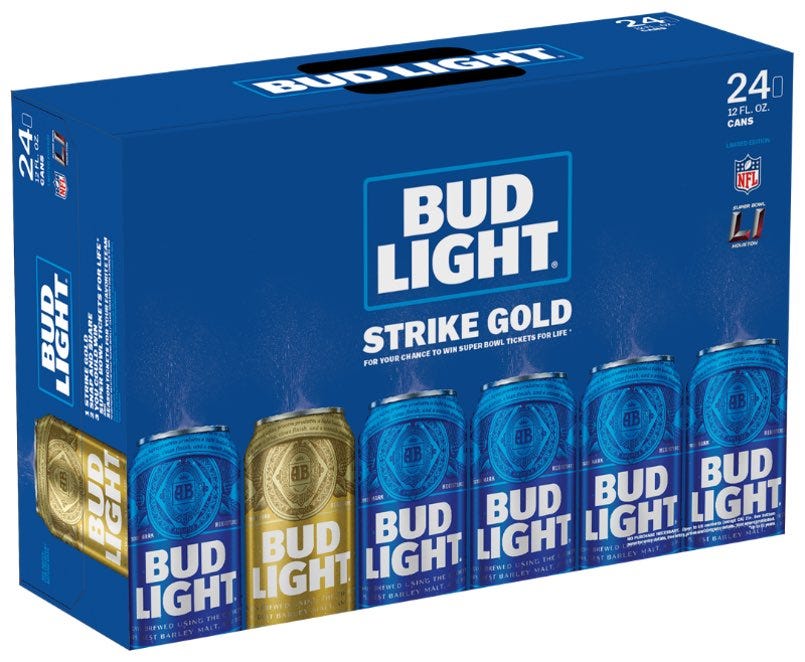 Only 37,000 gold 12-ounce cans will be available during the promotion from Nov. 28 through Jan. 13, and consumers can enter to win prizes by posting a photo on social media with the gold can and the hashtags #SBTix4Life and #Sweeps or by visiting BudLight.com. A-B said it’ll select six weekly winners for a pair of season tickets to their favorite NFL team, and the Super Bowl tickets for life grand prize will be announced in January.

I want to like this promotion. I really do. But why did Bud Light have to go ahead and fuck it up by making thousands upon thousands of gold cans? I want there to be one gold can in the U.S. and watch chaos to engulf the country. Or maybe five cans and each of the winners endure horrifying yet fitting ways of getting kicked out of the Super Bowl. Sure Anheuser Busch would probably have had to create special cases that couldn’t be ripped open by people that wanted free Super Bowl tickets are life. Or every store that stocks Bud Light would have had to install those weird ass bullet proof glass spinning things to keep the animals away. But the exhilaration every time you opened a new case of Bud Light would have been second-to-none. Instead you get entered in some promotion that you will probably forget to enter. And not just that, but you can also enter by tweeting a hashtag on Twitter? Absolute rubbish. Worst golden ticket promotion since the infamous Dunder Mifflin scandal of 2009.

P.S. If this is the first you have heard about this promotion and you win the Super Bowl tickets for life, you have to take me to at least one Super Bowl of my choice. That’s an unwritten rule between bloggers and readers.