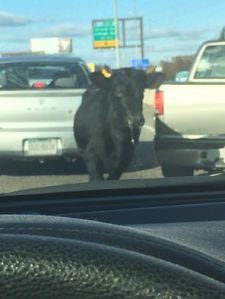 CBS – The bull was roaming around the Center City area before being lassoed and removed from 8th Street near the Vine Expressway. KYW Newsradio reports the bull has been tranquilized.

Freaking real life Jumungi going down on the streets of Philadelphia, again. Honestly, I’m not going to even venture how a full-sized bull escaped into the most prominent area of Philly like it’s a 3rd world country. All I know is I’m sitting on pins and needles waiting to see what City Slicker lassoed this fucker down on Vine St. You know one guy on the force was just WAITING for the day to show off his rope skills. That cowboy deserves his time to shine in the Worldstar spotlight.

Also, that bull had it easy. He’s is lucky he didn’t venture into Upper Darby Delco territory after the Eagles loss or it would’ve been beaten to a pulp by an angry, divorced drunk wearing nothing but jorts and a Ty Detmer jersey. If anything it should’ve headed towards West Philadelphia to be one with his fellow animals. And I’m not just talking about the crackheads. Remember when those zebras broke loose from the circus?

It’s a damn shame not everyone is fortunate enough to have an Auntie and Uncle in Bel-Air and has to deal with all the crime and wild stampedes in West Philly. Also, total cliffhanger leaving us in the dark on the Sonika call. That eloquent conversation was probably worthy of Shakespeare.

PS – The bull apparently hopped off of its slaughterhouse truck, charged the workers, and escaped into the sunset. That beast was all heart. Respect.