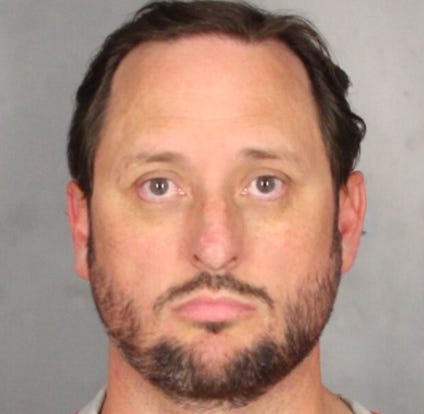 WACO, Texas (KWTX) Baylor Associate Athletic Director Heath Nielsen, 47, is free on bond following his arrest earlier this month on a misdemeanor assault warrant stemming from an attack on Nov. 5 in which a sportswriter was grabbed by the throat and pushed away from a player after the Bears’ 62-22 loss to TCU.

Baylor has not commented on the incident, but Nielsen has been conspicuously absent for the past several weeks.

The victim, James McBride had received permission from a football player to take a photograph, and after the picture was taken “Nielsen walked up to McBride on the right, grabbed McBride by the throat with his right hand, squeezed and pushed him away from the football player,’ an arrest warrant affidavit obtained by KWTX says.

When McBride and the player asked Nielsen what the problem was, he replied, “He’s abusing his privileges,” ‘the affidavit said.

“McBride had visible scratches and complained of pain around his throat.”

Nielsen is in his 17th year at Baylor, works directly with the football program “and is responsible for management of the public image of the program.”

Is there anybody in America worse at their job? Serious question. I mean it’s 1) political forecasters and pollsters and 1A) this dude. Heath Nielsen whose literal job description is “responsible for managing the public image of the program”…FOR BAYLOR FOOTBALL. Easily the worst public image of any sports program in the country right now. Not only passed Penn State which at one time I would have said was impossible, but blew their fucking doors off to launch themselves to the top spot. I mean you just simply cannot do a more horrible job in managing a public image, and now to top it all off you’re choking out reporters on the field for taking pictures? Amazing.

McBride writes for The Blaze News, a community newspaper in Keller.

He told KWTX Monday the newspaper had always worked well with Executive Associate Athletic Director Nick Joos and others at Baylor, but said it has had a history of issues with Nielsen, who was unhappy with some articles and videos McBride posted to his YouTube Channel, “Mustard Slinger Sports” that weren’t positive for the university.

“I had asked the player if I could take a photo with him, he said ‘yes,’” Mc Bride said Monday.

“I was leaning back to take the photo. I heard somebody who I didn’t know at this point in time yell from my right-hand side, saying ‘no interviews on the field,’” he said.

“About that time they came in and tomahawk-chopped, trying to knock the phone that I had taken the picture with out of my hand. They were unsuccessful in trying to do that, and when they couldn’t do that they came up and they grabbed my throat, and I pulled back. Whenever I looked up I saw that it was Heath Nielsen,” he said.

Right after the incident, McBride said, Nielsen told him, “You’ll never f****** work in this business again. You’re abusing your privileges on the field.”

Props to the guy for lasting 17 years I guess? Snake it til you make it…