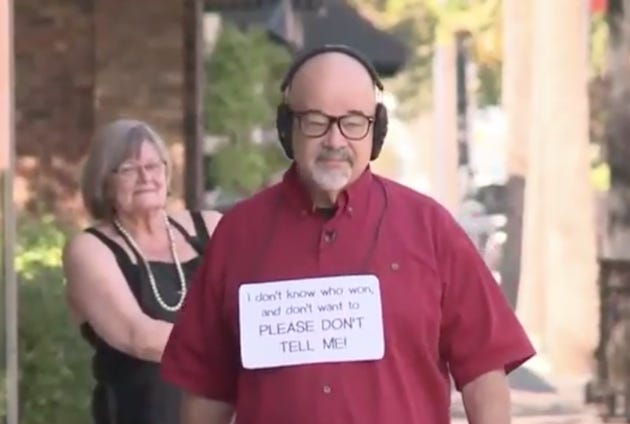 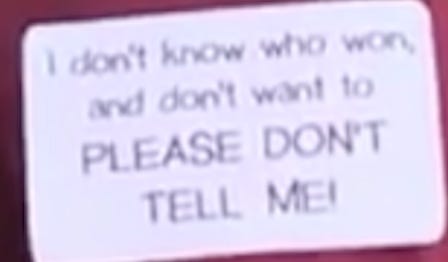 Huff Post — A man in Brunswick, Georgia, has elected to not find out who won the election.

Joe Chandler went to bed on election night not knowing if the winner was Hillary Clinton or Donald Trump.

“I was invited to an election party to stay up into the night with everybody gnawing their nails, hanging on and I thought, ‘Oh, there has to be a better way,” he told Fox 5 Atlanta.

Chandler decided to go to sleep before results were in, intending to find out the winner in the morning.

“Having subtracted myself from this political fracas and all of the mayhem of the digital media, I kind of found the center of the cyclone, it is very peaceful in my bubble of ignorance,” Chandler said.

To ensure that bubble doesn’t pop before he’s ready, Chandler has avoided newspapers, TV and the internet.

When he goes outside, he wears headphones so he doesn’t overhear any presidential news. Chandler also asks others to help him continue his ostrich-like approach to the election by wearing a sign that reads, “I don’t know who won, and don’t want to. PLEASE DON’T TELL ME.”

I want to be the guy to run up, rip this guy’s headphones off and scream DONALD TRUMP WON THE ELECTION in his earlobe so unbelievably badly. What a lucky duck that person is. What a great moment that will be.

Fuck this guy. Oh, it’s better to walk around through life with headphones on and not hear or consume any of the bullshit going on around you? It’s better to not read the news and to be completely oblivious to all the mainstream media and pundits blabbering on about the election? It’s better to completely block out all the clutter? Yeah no fucking shit dude. “Ignorance is bliss” is the most accurate cliche of all time. Why do you think Gronk’s just the happiest person in the world all day every day?

But this is reality here. This is a society. Eventually someone or something’s gonna burst your bubble and that’s going to be such a glorious moment for the rest of us living in reality. Is the crash going to be worth the high for this guy? I seriously (hopefully) doubt it.