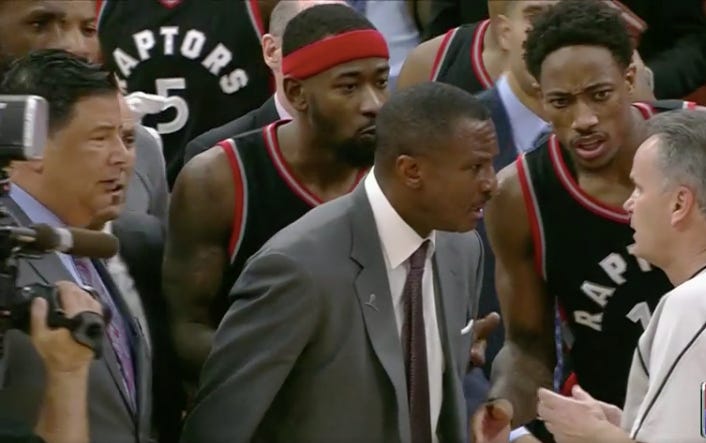 Clock operators so hot right now, clock operators. Reags talked about what went down in college hoops, so now it’s the NBA’s turn to have their moment in the spotlight.

Here’s the scenario if you missed it. Down 99-102 the Raptors inbound the ball, it’s tipped by Boogie, but the clock doesn’t start. Terrance Ross then got possession and hit a BOMB to tie the game as the clock”expired”.

Overtime right? Wrong you dummy. The refs called this shot off because the clock operator started late. That is some shit luck, and I can understand why the Raptors and their fans would be pissed, but rules are rules.

Look at the shot when this is factored in

Is it the Raptors fault this clock operator fucked up? No, but tape don’t lie. The shot should never have counted in the first place. Here’s an idea though, instead of bitching about this correct call, maybe don’t be in a desperate situation against the freaking Kings. Maybe put blame on DeRozen going 3-15, or the fact that they shot 40% for the game.

I can understand initially the rage at this call, but once it was clear Boogie touched it, I’m not sure why Raptors fans are so upset. How is this any different from when the league goes back and looks at questionable threes during a timeout and changes them after the fact? Maybe it’s a bit different, but the principle is the same.

I already dislike Drake’s song about this