NY DAILY NEWS – On Friday, the Adam Yauch Park in Brooklyn was defaced by vandals who spray painted two swastikas and the words “Go Trump!” on the side of this playground toy. In the days that followed, notes and flowers appeared at the scene covering up the message of hatred left in a children’s park over the weekend.

Man, I bet they showed this graffiti artist! He’s probably quaking in his boots somewhere, huddled in some damp apartment, terrified to see the light of day. Either that, or he did the graffiti to get a huge reaction out of everyone and to piss a bunch of people off, and he wound up doing exactly that. In fact, it probably went better than he hoped, as he got Ad-Rock and fucking Ben Stiller to hold a candle-lit vigil to protest against the hate. This person is trolling. For him there is probably no delight quite as great as seeing a bunch of protestors and community organizers coming together with their smug faces, linking arms to show the world that they won’t stand for this.

Look at all these fucking people. 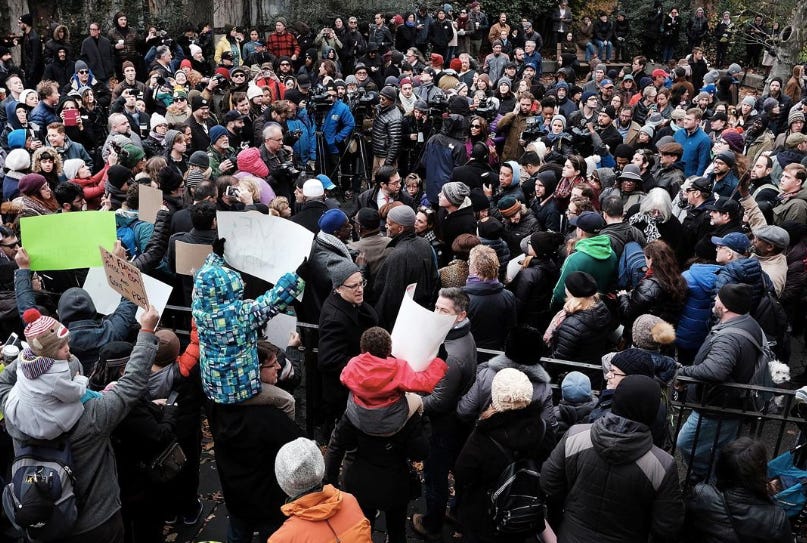 And you know how I know they’re full of shit? Ask any of them what they want to do about hate. Do they have any real solution? No. They’re not going to find who did this. They’re not going to deter it from happening again. It’s a bunch of white people in a park with signs, hoping to get a glimpse of the guy from Dodgeball, sniffing their own farts so they can feel like they did something or set a good example. Humans trapped in a loop where they only encounter people who look and think like them.