CSN – “I got to get out of my own head,” Agholor said at his locker. “Pressing so much and worried about so many things. I got to go out there and (just) try to catch the ball … because I’m thinking too much and got so worried. “And it’s such a selfish thing that I need to stop. I need to give my energy to my teammates and this organization and not myself. I’m feeling so much pressure to make every single (play). Just have fun.” Agholor, a first-round pick last year, has just 50 catches for 547 yards and two touchdowns to show for his first 23 NFL games.

Hey, did you know Nelson Agholor and Russell Wilson have the same amount of TD receptions this season? If you didn’t, just follow any Philly sports media personality. They’ll tell you every 30 seconds and will think they’re hysterical each time.

So Nelson Agholor almost batted 1.000 in the game of incompetence yesterday. Zero catches for zero yards. The dropped long pass was one thing. Inexcusable for a middle school WR let alone someone making millions to literally catch a football for a living. However, Agholor not lining up correctly and costing the Eagles one of the biggest plays of the year should make #11 want to walk back from Seattle. Zach Ertz has been getting tons of heat for his lack of life this season. How pissed do you think he was when his long, impressive TD was called back for something you get taught in Pee-Wee football? Unreal. I’m actually surprised Agholor was still on the field to be able to make that decent, yet meaningless 2 pt conversion. And what’s worse is the Philadelphia Eagles can do nothing about the bum formerly known as Nigerian Nitrous. What are they gonna do, cut him? The only thing that’ll sting more is when a coach like Lord Belichick (who LOVED Agholor at USC) scoops him up and makes the former 1st round pick into a mega star. A Cris Carter situation all over again, minus the Angeldust. At this point you have to keep him out of spite and hope for the best. Or keep running 3 TE sets and continue to make barnburning Trey Burton the go-to playmaker in this offense. Which, no offense to Trey, is possibly the most embarrassing thing to happen to this Eagles offense since James Thrash used to point to the sky after every 3-yard gain on 3rd and 8. 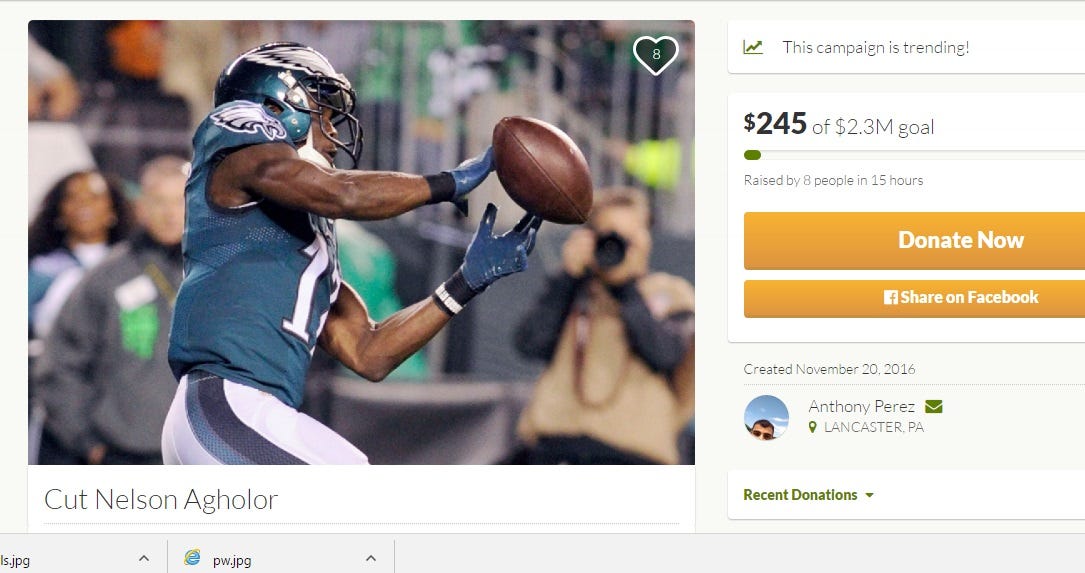