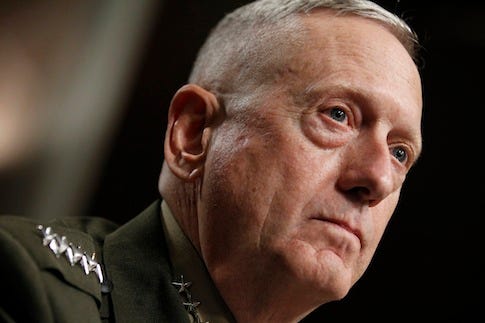 Asked by reporters if he would choose Mattis to lead the Defense Department, Trump said, “All I can say is he is the real deal. He is the real deal.”
In Mattis, Trump has a candidate who was held in high regard throughout the ranks of the Marine Corps during his 44 years of service. A seasoned combat commander, he led a task force into southern Afghanistan in 2001 and a Marine division at the time of the Iraq invasion in 2003.

The retired four-star general, who was known as “Mad Dog,” was lauded for his leadership of Marines in the 2004 Battle of Falluja in Iraq — one of the bloodiest of the war.
But he attracted controversy in 2005 when he said “it’s fun to shoot some people” while addressing service members in San Diego.

General Mattis might be the most beloved officer for Marines since Chesty Puller. I don’t know a single Marine who doesn’t love General Mattis. He was said to be too brazen to be the Commandant, but he is exactly the type of officer who you’d want to be with if you were going to war. Marines regard him as the perfect General officer for ground troops.

If President-Elect Trump does tap General Mattis to be the next SECDEF, we might as well change the title back to the Secretary of War, because Mad Dog doesn’t fuck around. Can he do the job well? Who knows. I know that he will be an absolute quote machine while trying to, though. 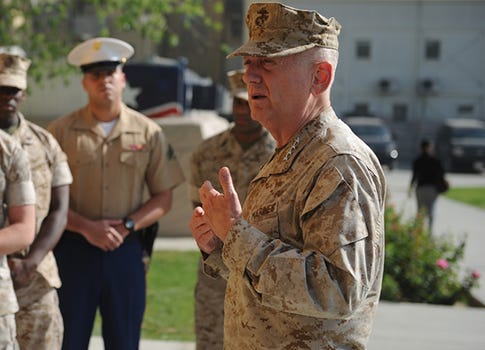 “I don’t lose any sleep at night over the potential for failure. I cannot even spell the word.”

“The first time you blow someone away is not an insignificant event. That said, there are some assholes in the world that just need to be shot.”

“I come in peace. I didn’t bring artillery. But I’m pleading with you, with tears in my eyes: If you fuck with me, I’ll kill you all.”

“Find the enemy that wants to end this experiment (in American democracy) and kill every one of them until they’re so sick of the killing that they leave us and our freedoms intact.”

“Be polite, be professional, but have a plan to kill everybody you meet.”

“You go into Afghanistan, you got guys who slap women around for five years because they didn’t wear a veil. You know, guys like that ain’t got no manhood left anyway. So it’s a hell of a lot of fun to shoot them. Actually, it’s quite fun to fight them, you know. It’s a hell of a hoot. It’s fun to shoot some people. I’ll be right up there with you. I like brawling.”

“I’m going to plead with you, do not cross us. Because if you do, the survivors will write about what we do here for 10,000 years.”

Yeah. You gotta change the title back to Secretary of War if you pick General Mattis. He deserves it.