Shasha Barkov. You cheeky bastard, you. A few weeks ago, we saw some dude in the Swiss league breakout the outside skate edge move. And then Barkov decides to throw a fake slapshot into the mix AND finishes it off with a Forsberg? All on Lundqvist??? Good god. The man has a family, you know. Just blatant disrespect toward one of the best goaltenders in the league. I love it and you know that Jagr had something to do with this. Barkov was probably planning to just hit him with a little forehand-backhand action. Then Jagr told him to stop being a little bitch and completely demoralize Hank. I think we need at least a month-long break from anybody calling Hank a “King” after this one. Unless we start calling Barkov the King Slayer, of course.

While that move was filthy, Evan Rankin on the Toledo Walleye in the ECHL saw that dangle and decided to raise Barkov with this monstrosity here.

I’m at a loss for words here. I can’t pick which is the most impressive part of this move. The edge work? The puck control? The giant huge massive pair of balls it took to pull it? What we see here is a kid who is trying to do everything he possibly can to not have to play in a league with blue Geico goalposts anymore. Much respect.

We’ll stay in North America for now before taking a quick trip across the pond.

Julien Gauthier could have easily been a top 5 pick in last year’s NHL draft. He had 41 goals in 54 games last season for Val d’Or but he ended up dropping to Carolina at #21 overall. We call that a ‘steal’ in the biz. Sure, he’s from Quebec which makes him a little French Canadian bitch. But the kid is 6’4″ and knows how to use his body to his advantage. And now that poor sack of shit Russian defenseman who got bullied by Gauthier needs to stay in Canada for the rest of his life. You know Putin already has his car ready to explode the next time he turns the ignition.

Now we’ll take a trip over to Finland real quick to learn how to make sure your coach never loses his shit on you.

You score here and it’s a total beauty. You miss and you can just go back to the bench saying you accidentally lost control of the puck. It’s a can’t-lose situation and that’s all we’re really looking for in life. This kid is an expert in the school of “snake it till you make it”.

Back to the NHL where this Mitch Marner move was so smooth I had to blog it twice.

You can read what I had to say about this goal on Friday right here.

Fight Of The Week: Alexander Taulien vs Zach Dymock. A one-punch knockout beauty in some heated FHL action.

The “Folks, You Can’t Make This Stuff Up” of the Week: Tyler Johnson loses his stick in Philly. Who ends up catching the stick in the stands? A fan wearing a Tyler Johnson shirsey. Folks,,

Jimbo of the Week: Player on Chinese KHL team takes a penalty during a penalty shot. In the words of Will Ferrell…. “what an idiot”.

Last thing before we wrap this up… 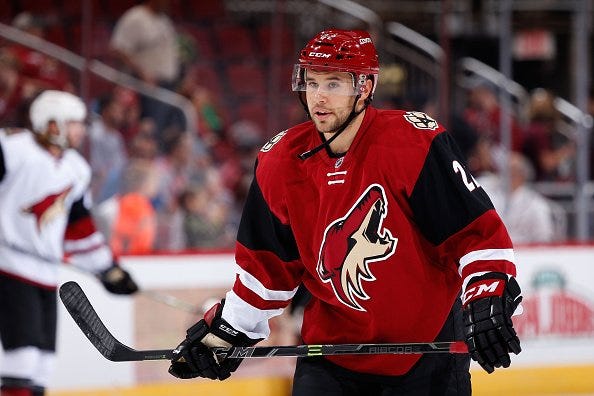 Special thoughts and prayers go out to Tucson Roadrunners captain Craig Cunningham. The Roadrunners are the Arizona Coyotes’ AHL affiliate. Cunningham suffered a heart attack on the ice during pregame warmups Saturday night. There have been some good reports coming out that his blood pressure is getting closer to normal but he’s still in critical condition. Incredibly scary stuff especially considering Cunningham is only 26-years-old. Here’s to hoping he pulls through this one. Stick taps all around for Cunningham.

Now to bring the mood back up, sit back relax and enjoy this dangle compilation video.