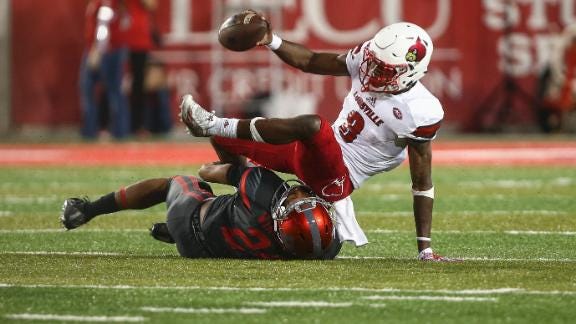 Last night was expected to be a statement game for Louisville, and instead it was a death sentence. The Cards traveled to Houston where a motivated, hungry Cougars team waited. Vegas dubbed the Cardinals as a 14 point, and that number quickly rose to 17. It was probably going to be a high scoring affair, but in the end Lamar would pull away for a convincing win. Oh but of course nothing goes as planned these days.

TDECU Stadium was out of control from that point on. The Cougars took it to Louisville and dominated them in all three phases of the game. Heisman front-runner, Lamar Jackson, was completely bottled up the entire night and never was able to show off his lightning quick speed. After trailing 10-0 after the first quarter, most expected the Cardinals to creep back into the game. That didn’t happen, instead Houston poured on another 21 points in the 2nd frame to go into half up 31-0. That was all she wrote for the Cardinals playoff chances. There was no miracle comeback. No Lamar Jackson show. 36-10 Houston.

So what does this mean for the playoff picture? A whole lot less confusion, that is for sure. With Louisville completely out of the picture it means one less non-conference champion for the committee to debate on come season’s end. Penn State, Wisconsin, Washington, and even Oklahoma are very alive at this point with the Louisville loss. Bama and Clemson are going to get in, which leaves two spots. I believe the winner of Michigan-Ohio State will get in regardless of Penn State’s results. It just wouldn’t feel right for both of those teams to be left out. That leaves one spot for the Penn State, Wisconsin, Oklahoma, and Washington. No way there will be any drama over the next three weeks…