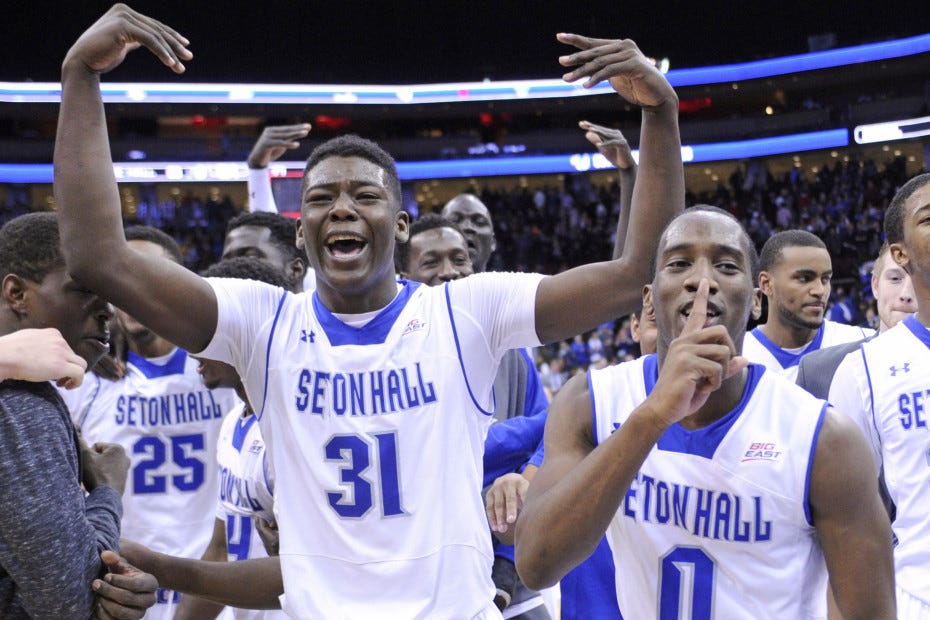 We’re a week into the season, which means of course there are plenty questions about teams. Teams we thought would compete (UConn) look downright terrible. Teams that were maybe thought of as second tier Final Four contenders have made points (Indiana). Regardless, people have questions and I’m here to do my best to answer them for you.

So with that out of the way, slap on the TV or WatchESPN to follow along with some of the afternoon games today while you read this and hopefully get some clarity.

There’s a couple of Big East questions as they are one of the more intriguing conferences out there, so if you hate the Big East you may not want to read these next couple. Yes, I think the Big East is the second best conference behind the ACC and just slightly above the Big 10. Villanova is clearly as good as anyone in the country as the conference flag-bearer and there’s not a ton of shitty teams. Sure, DePaul sucks and Georgetown had an embarrassing loss – but they aren’t as bad as that record shows. The middle of the group all have the potential to be NCAA Tournament teams and I could see as many as six making it from the Big East. So as the season plays on I think you see them jump the Big 12 (currently 2nd in KenPom conference rankings) as the second best conference.

The follow up Big East question here regarding Seton Hall. They got a nice road win against Iowa last night (especially nice if you took the ML with them as a dog), but I still have them as the fourth team in the Big East. You have to remember Xavier is playing without two key players in Myles Davis and Kaiser Gates. Creighton still has Marcus Foster and Mo Watson with a real nice supporting cast. If Isaiah Whitehead came back then sure I could see them in the 2nd/3rd discussion. But, right now they are still the fourth best team in the Big East. I think they are clearly a tournament team and will be ranked at some point this season. The growth of Khadeen Carrington has been awesome to see as he sort of took a backseat to the Angel Delgado and Desi Rodriguez lovefest this offseason. But right now Carrington has an eFG% of 72.5%, as a major contributor on KenPom.

I’m going with Michigan here. I was high on them coming into the season – having them 4th in the Big 10 – and they showed how good they can be when the offense is clicking last night against Marquette. What I like most about this team is the guard play and versatility they have with their lineups. If Michigan needs to go big they can play Wagner and Donnal together. DJ Wilson has improved his game and is a 6’10” matchup nightmare. You have a senior backcourt with Walton, Robinson and Irvin. Not to mention how good they are at reading the defense when cutting off the ball. I think Michigan is a team that didn’t get a ton of respect heading into the season and that was mostly due to injuries the last couple of years. But, right now they are the best team without a number next to them.

One of the most talked about rumors in quite some time is this Allonzo Trier suspension. Some think it will be all season, which will absolutely suck for the sport and for the kid. He came back to compete and would have likely been a first round pick. If he doesn’t come back, Arizona still has the talent to finish 2nd or 3rd in the Pac-12, but it’s hard to see them better than a 4/5 seed come March. I wouldn’t view them as a Final Four contender, but think more Sweet 16. Trier does so much for that team and provides a huge scoring option, which to go with Kobi Simmons would be dynamic on the wings. Luckily Arizona has a weak schedule over its next four games to figure everything out. But, without Trier I think you’re looking at a 4/5 seed.

I don’t think anything is wrong with Ethan Happ. In two of Wisconsin’s games they’ve blown out its opponents so he’s only played 20-25 minutes and against Creighton the Badgers settled for outside jumpers. That was more of a team offensive problem than anything with Happ. He’s still wildly efficient, shooting 73% from the floor through three games and has had two games with eight rebounds. I’d like to see Wisconsin get back to running its offense through him and not so much Nigel Hayes shooting 20-footers.