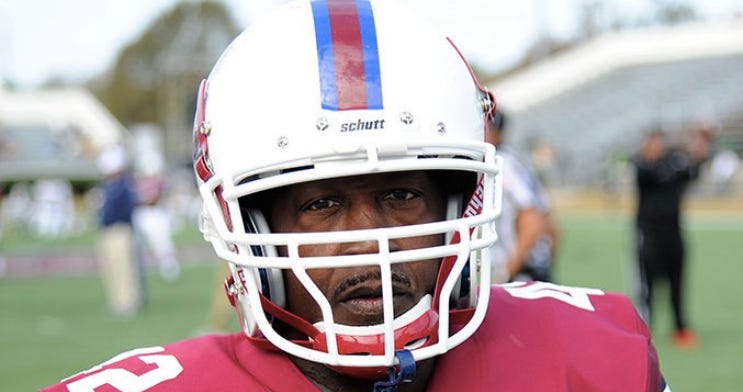 CAMPUS RUSH – An hour before sunrise, the first player pushes open the doors of the locker room and bounds into the bright lights of the stadium. It’s half past six in the morning, and this is South Carolina State’s final full practice before its Homecoming game. For the next 10 minutes, players stream out to a playlist booming from speakers set on top of a laundry bin. Trainers top off water jugs and wheel them to the benches. Cheerleaders wearily sway on the opposite side of the field. The head coach, Buddy Pough, spins in on a bicycle and begins issuing orders to assistants.

Joe Thomas Sr. strides out to join the team. He’s the only player without even a single accessory: no leggings, no wristbands, no gloves, just team-issued blue-and-white striped shorts, his No. 47 jersey and an unadorned helmet. With the pads bulking his chest and the helmet guarding the wisp of grey at the peak of his hairline, he hardly seems 55 years old.

Midway through practice, he slips a yellow scout team sleeve over his helmet and jogs onto the field to rehearse kickoff return coverage. He’s been at this for the better part of four seasons, enduring bleary-eyed predawn practices designed for players 35 years younger and in peak physical condition, with one goal in mind: To get in a game and make history as the oldest man ever to play Division I football. Detractors be damned: Joe was born to a sharecropper and raised a Green Bay Packer. He could barely hear until 17 and still graduated high school. And no one will be able to convince him that he can’t compete until he takes the field and tries for himself. “I believe that if the coaches looked past my age and just let me play football,” he says, “I’d steal someone’s position.“

Age isn’t the only way time that is taunting him: South Carolina State has only two games left this season, and because he’s a senior, he’s running out of opportunities.

Look at this old legend go. At the ripe old age of 28 I feel that my body is pretty washed up and wrung out, so to see this quinquagenarian getting out there and taking his lumps from some 18-year-olds makes me feel concurrently great about humanity and awful about myself. And at that age, you have to believe in yourself to even be put in a situation like this, so the fact that he thinks that he would take the position of a player if the coaches just let him play a little ball is not only inspiring, its pretty much necessary. From the coaches point of view, they probably don’t want some geezer older than them waltzing out there and getting his hip exploded like the Death Star, but we can’t exactly say things like that out loud, because behind sexism, racism, cancer and guns, ageism is the most dangerous force facing our country.

His story gets even juicer when you read that he couldn’t hear until he was 17 years old, which I didn’t know was a thing. I have heard of people being late to the talking game, or being able to read, but never someone who couldn’t hear until their late teens. From a pure football standpoint, it’s borderline genius, because if you can’t hear at all, you definitely can’t hear the haters. I also don’t love the move of Campus Rush calling him a senior in that last sentence. Hey dickeheads, he’s only 55, not quite a senior yet. Now stop trying to throw dirt on his grave and let the kid play some ball.

I do always love to see people put the NCAA in a pretzel, because as Jay Bilas pointed out, this guy being too old to play doesn’t exactly mesh with the story of Villanova’s Omari Spellman, who was ruled ineligible because he played 9th grade basketball as an eighth grader. The rules simply seem not to make sense. But what else is new.