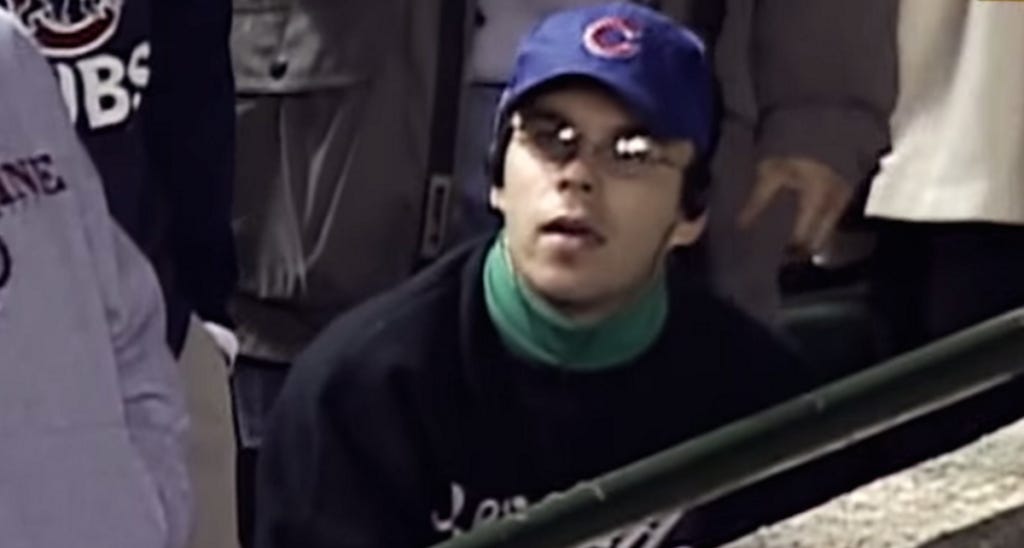 You might’ve heard this actually, but the Chicago Cubs won the World Series.

If you’re familiar with the Chicago Cubs, then you might also be familiar with the name Steve Bartman. For those who aren’t familiar, Bartman was the poor bastard who stuck his hands out to catch a foul ball in the 8th inning of Game 6 of the 2003 NLCS. It was a ball that Moises Alou thought he could’ve caught, and expressed that by throwing a temper tantrum after Bartman interfered with the play. The Cubs held a 3-0 lead at that point. They went on to lose that game, and Game 7, having to wait until 2016 to get that close again. Only this time, they actually made it to the World Series and won the whole fuckin’ thing for the first time since 1908.

Cubs fans made Bartman’s life a living hell because of that night. The poor guy needed police outside of his house to protect him as a result of all of the death threats that he received after the unfortunate incident. Bartman has basically been in hiding ever since. The most recent photo that the public has seen of him was from that night at Wrigley Field, which was 13 years ago.

When the Cubs made it back to the World Series this year for the first time since 1945, I wrote about how it would be an all-time great sports moment if Bartman threw out a first pitch before one of the World Series games at Wrigley. And it would’ve been. But I also didn’t blame him for wanting to stay out of the spotlight. If Bartman came out of hiding after all these years, threw out a first pitch, and the Cubs lost the World Series, he would’ve invited the opportunity to relive his nightmare times a million. But, now that the Cubs have finally put an end to their 108-year World Series title drought, the organization plans on reaching out to Bartman.

“I’m sure we’ll reach out to him at the right time,’’ Ricketts revealed, “and I’m sure we’ll figure something out that provides closure for everybody. Hopefully, we can make it work.

“But you know, I never focused on ghosts or curses or Bartmans or any of that stuff. It’s always been about needing a better team on the field. We wanted to eventually get to that point where we can pick out rings, like we did (Tuesday), and here we are.’’

I think the best way to bring closure to both sides is if the Cubs offered Bartman a World Series ring. It’s the Cubs’ way of saying, “We did it,” and it’s also a token of their appreciation for Bartman’s support of the team through thick and thin. I’m sure that it would mean a lot to him, especially after all that he’s been through, being unfairly blamed for the Cubs failing to make it to the World Series in 2003. It’s something that would obviously be a dream come true for any lifelong Cubs fan, and he could enjoy it in private, without having to come out of hiding to receive it, which it seems like that’s where he prefers to stay. This was from October 26, 2016:

“Steve is cheering for the Cubs and continues to be a Cubs fan. He just wants everybody, moving forward, to respect his privacy and let his life continue to unfold as the grand plan has it. Unimpeded by things that … have been blown out of proportion,” said Frank Murtha, the family friend who has acted as Bartman’s agent, spokesman and gatekeeper these past 13 years. “I think that’s the one message. It’s not necessarily a new one.”

I think, even now that the Cubs have finally won, we’re not going to see a first pitch from Bartman, or a Steve Bartman Day at Wrigley. The guy just wants to be left alone. He doesn’t want to be part of some grand spectacle where everyone comes out to show that they forgive him now. Fuck that. It was never his fault. He never had to apologize in order to receive forgiveness in the first place, but if you recall, he actually did apologize. Here’s his original apology letter from October 15, 2003.

“There are few words to describe how awful I feel and what I have experienced within these last 24 hours.

I’ve been a Cub fan all my life and fully understand the relationship between my actions and the outcome of the game. I had my eyes glued on the approaching ball the entire time and was so caught up in the moment that I did not even see Moises Alou, much less that he may have had a play.

Had I thought for one second that the ball was playable or had I seen Alou approaching I would have done whatever I could to get out of the way and give Alou a chance to make the catch.

To Moises Alou, the Chicago Cubs organization, Ron Santo, Ernie Banks, and Cub fans everywhere I am so truly sorry from the bottom of this Cubs fan’s broken heart.

I ask that Cub fans everywhere redirect the negative energy that has been vented towards my family, my friends, and myself into the usual positive support for our beloved team on their way to being National League champs.”

If Bartman ever does reemerge, it shouldn’t be so that Cubs fans can forgive him. It should be so that they can give an apology back to him.