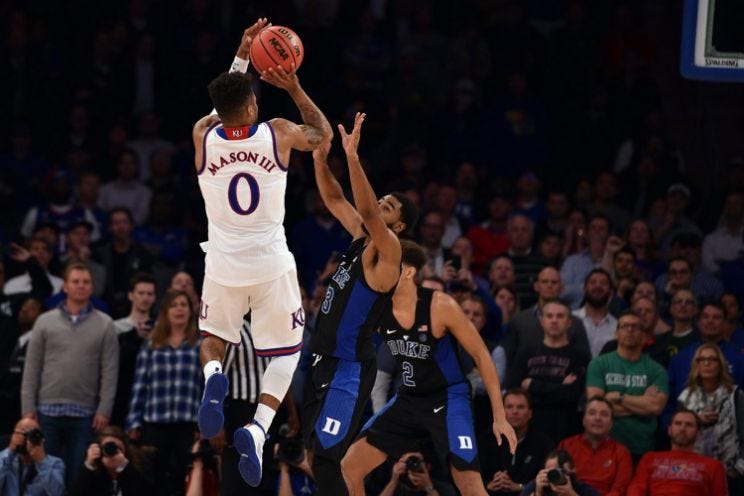 Needless to say we’ve had an awesome couple of days of college basketball. Kicking off with the showcase games in Hawaii on Friday, before Purdue/Villanova on Monday and the Champions Classic and Gavitt Games going on last night.

We’ve seen multiple games come down to the buzzer and are starting to see what to expect with some teams. So with a day before some of the tournaments tip off, we’ll review the first couple days and what we’ve learned so far. Let me know what you think about the season so far on Twitter @barstoolreags

The Reffing is Still Not Great

There’s no hiding it. College basketball reffing has been subpar over the years. This year isn’t any different as we’ve seen a ton of whistles. That’s not going to change anytime soon. The reasoning is the NCAA/refs hope that a couple soft calls will have the players adapting how they play defense, allowing for more freedom of movement. I don’t necessarily have a problem if that’s the plan and players adjust, but the problem is having big name guys on the bench with two fouls less than three minutes into the game. We’re going to see a lot of weak fouls in the post as they try to clean up play in there, but personally I think they need to do a better job with that. Too often a bigger guy gets penalized for being just that. Big. Just be prepared to see whistles, this will start to go to the wayside as it does every year come conference play.

Kansas Needs to Find Defense on Spot Up Shooters

I think Kansas is going to win the national championship. I absolutely love its backcourt and guys like Landen Lucas go a long way in the NCAA. However, through two games they’ve absolutely struggled on drive and kicks on the defensive side of the ball. Granted the two teams they’ve played are Duke and Indiana who happen to thrive on that type of offense, Kansas is usually sound defensively. Too often they are getting stuck helping too much with the kick and getting lost on the recovery. Knowing Bill Self, that will get fixed quick. That said, Frank Mason is showing that he desperately wants to be an All-American.

Duke Can’t Win a Title Without the Three Injured Guys

Duke is a good team. Even without Harry Giles, Jayson Tatum and Marques Bolden the Blue Devils are incredibly talented. But, they lack depth and have to play essentially a six-man rotation without them. They are all expected to return at some point in the near future and I think Duke immediately goes back to being the best team in the country, but right now they need help.

We’ve seen Michigan State in two big games now and both happened to be losses. Granted the one vs Arizona came down to the buzzer and Michigan State blew a big lead, the one against Kentucky was a blowout. Miles Bridges is a star. Cassius Winston can be a factor when he’s not in foul trouble. But, Michigan State needs Eron Harris to be that second guy to Bridges and so far he hasn’t. Last night he could barely stay on the court because he was just giving up a layup line defensively.

Indiana Can Win the Big 10

I admit I was down on Indiana before the season started because of how important Yogi was to this team. However, in the game against Kansas the Hoosiers showed they can compete with anyone in the country because of how valuable 3-point shooting is and there might not be a team in the country that shoots as well as Indiana. Hell, even its big guy Thomas Bryant started the season by hitting a three. I still don’t think they are as good as Wisconsin because Indiana can’t play any sort of defense, but this team can compete for a Final Four with its shooting.

Who Can Beat Kentucky When It Shoots Well?

We saw Kentucky shoot the ball last night against Michigan State, specifically Malik Monk. That was the biggest question with this team as everyone talks about their defense and ability to get to the rim. However, if they get consistent shooting from Briscoe/Monk/Fox to go with Willis and Gabriel, who can stop them? It’s clear right now they are the most talented team in the country until Duke gets healthy.

Villanova went on the road and got a win over a ranked opponent on Monday against Purdue. What I was most impressed with though was the ability for Villanova to win despite not having a great output up some of its top guys. Jalen Brunson was awful against Purdue yet they didn’t trail the last 36 minutes of the game. What I didn’t necessarily like was people praising Purdue for playing tough at home. That’s a game they needed to win – if they are truly a top-15 team in the country, which I don’t think they are. But a ranked team, that returns a ton of talent should beat a team like that at home early in the season.