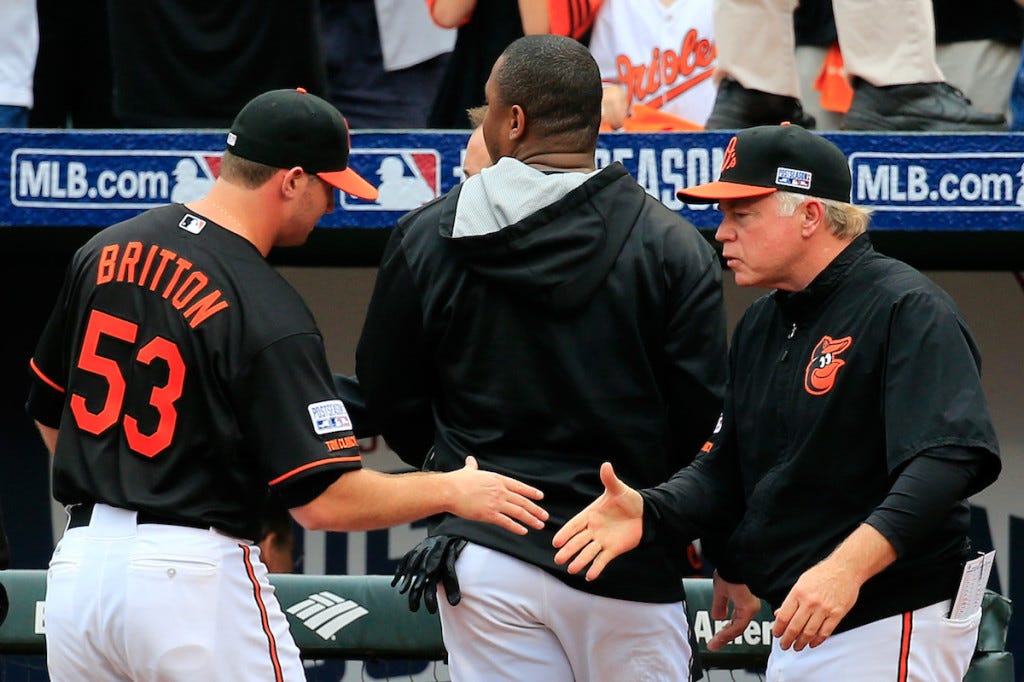 Not a big Buck Showalter guy. I think he’s a great manager — one of the best in the game, actually — but he turned me off once he started bitching and moaning about other teams having large payrolls, even though Baltimore had the eighth highest payroll in baseball this year. Back in 2011, Showalter criticized Theo Epstein after the Red Sox signed Carl Crawford to a seven-year, $142 million deal.

“I’d like to see how smart Theo Epstein is with the Tampa Bay payroll,” Showalter told the magazine. “You got Carl Crawford cause you paid more than anyone else, and that’s what makes you smarter? That’s why I like whipping their butt. It’s great, knowing those guys with the $205 million payroll are saying, ‘How the hell are they beating us?’”

I’d love to hear your thoughts on Theo now, Buck. That, and the Orioles paid Chris Davis $19 million more than the Red Sox paid Carl Crawford. Anyways, that’s not the point of all this. I actually want to give Showalter props for admitting that he fucked up. Not that he had any other choice, if we’re being honest. Not using Zach Britton in that AL Wild Card game was inexcusable, and it looked dumber and dumber every time that Terry Francona called upon Andrew Miller in the most unconventional situations, yet almost every time he was called upon, Miller made Francona look like a genius. Both managers were finalists for the AL Manager of the Year award, which was announced last night. Francona won (again), and Showalter did not.

This brings me to the question that I’ve been asking for a few weeks now — how will Francona’s use of Miller in this year’s postseason affect bullpen management in the future? Now, not every team has a Miller-like reliever waiting in their bullpen, but Showalter is probably the only manager in baseball who can say that he has an even better option to go to than Francona does. Had Francona used Miller the way that he did this year in last year’s postseason, then we wouldn’t be wondering if Showalter would’ve used Britton in this year’s Wild Card game, but rather which inning would he have used him in, and for how many innings?

Every time I think about it, I still shake my head. How the fuck do you go down swinging with Ubaldo Jimenez when you have Zach Britton in your bullpen? HOW?!