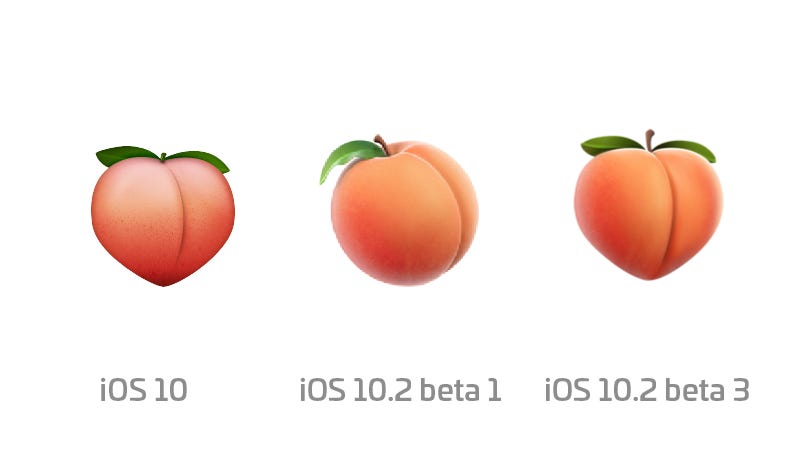 Tech Crunch- Nobody can touch the peach butt emoji, not even Apple. A couple of weeks ago, Apple dropped the first iOS beta for iOS 10.2 with dozens of new and redesigned emojis. The world needs more emojis, I’m all for it. But Apple also accidentally redesigned the peach emoji and was a bit too literal — it didn’t quite look like a butt. Calm down, no need to grab the pitchforks. Apple released a new beta with a butt-looking peach emoji.

As you can see on the top image, the new peach emoji looks even more like a butt. Apple didn’t just roll back to the old emoji design. The company called its emoji designers again and asked them to redraw the peach emoji.

Our country has been through a lot the last few days/weeks/months, so it’s nice to finally get a win that we can all agree is a win. I blogged about the new emojis that would be coming out in iOS 10.2 and one of the biggest stories was the peach not really looking like a butt. However, wouldn’t you know that for once Apple has decided to not kick their customers in the proverbial dick and has reversed course. Look at that peach butt. Sexy as fuck. Rachel Starr level booty. I’ve always been more of a leg and ass guy and I approve the hell out of this peach tushy. I want to rub Vaseline all over that heinie and tell it that it’s special and different from everyone else’s. There have been a lot of things that has divided this country as of late, but I’m happy that we can come together as a people and still sext nice looking butts to each other. No protests or petitions needed. God bless the U.S.A.