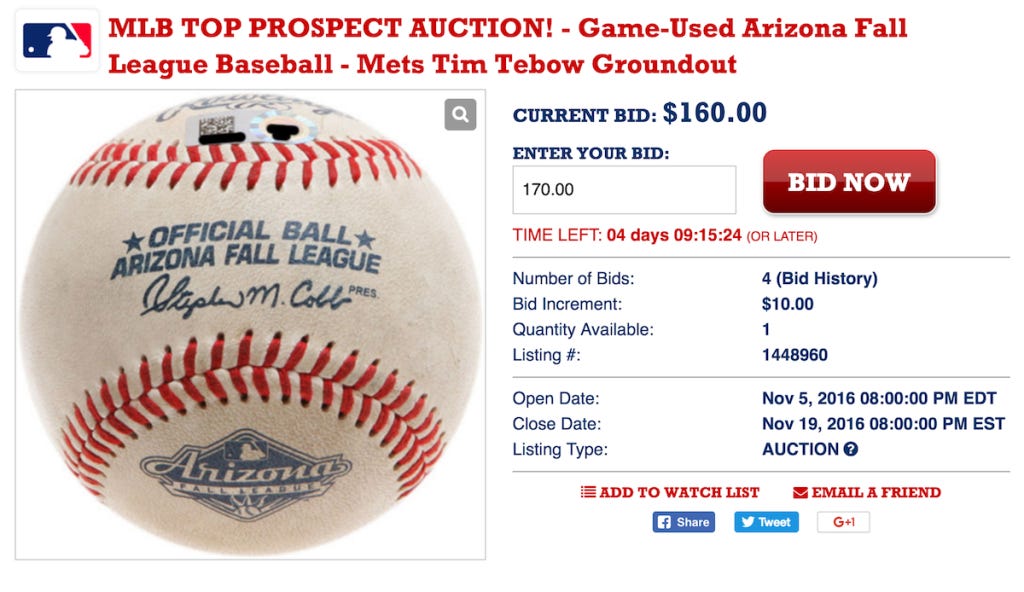 I gotta give some props to whoever is in charge of these MLB auctions, because this is the second time in the last month that they’ve gotten us to blog about one of their items. First, they put a Zach Britton “game used” jersey from the 2016 AL Wild Card game up for auction, which got a lot of attention because O’s manager Buck Showalter infamously never called upon his closer in that game, even though he had a historic year out of the bullpen for Baltimore. The Orioles lost in extra innings, and Britton’s absence from that game has been scrutinized ever since.

Now, this. Another baseball storyline that has been scrutinized quite a bit recently has been the Tim Tebow attempting to become a professional baseball player story. Just to refresh our memories really quickly, here’s what ESPN baseball writer and prospect guru Keith Law had to say about Tebow when he watched him play baseball with his own two eyes.

Tim Tebow is in the Arizona Fall League. He might be better suited to playing in an Arizona high school league. His presence here is a farce, and he looks like an imposter pretending to have talent he does not possess.

Tebow the baseball player is not a baseball player; he’s a washed-up quarterback who has size and nothing else. His swing is long, and he wields the bat like someone who hasn’t played the sport in more than a decade, which he hasn’t. He can’t catch up to 90 mph, which is well below the major league average for a fastball, and was cutting through fastballs in the zone on Wednesday night. He rolled over twice on fastballs, which is something you generally see professional hitters do only on off-speed stuff, and he showed below-average running speed. In left field, his routes look like those of a wide receiver, although he managed to eventually make his way around to a fly ball in left.

In short, there’s absolutely no baseball justification for Tebow to be here.

There are organizational players — players who fill out minor league rosters but have little to no chance to play in the majors — in the AFL every year, but they’re at least credible in the role. Tebow is the only hitter I’ve seen here this year or in any recent year who couldn’t even square up a below-average fastball.

Chasing celebrities is no way to run a player-development department, an organization or a league. Everyone involved in the decision should be embarrassed when they’re done counting their money.

Excited yet?! GOOD! Because for just TWO easy payments of eighty-five dollars, this piece of history could be yours. That’s right. You, yes YOU, could be the proud owner of a Tim Tebow AUTHENTICATED ground out baseball. You only have four days left to bid on this item, so act fast. It would be the perfect Christmas gift for that Mets, Jets, Broncos, Patriots, Eagles, or Florida fan in your life, or maybe just somebody who appreciates baseball history.