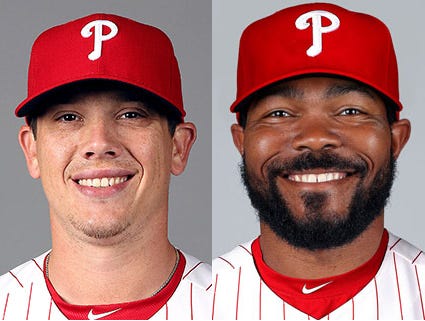 Jeremy Hellickson accepting the qualifying offer is the least surprising news ever. Fact of the matter is Hellickson is a mid-rotation guy. To offer someone like him $17.2 million and give him 7 DAYS to ponder that, it is just dollars and cents at that point. How do you say no to that guaranteed money when in your entire career salary to date is 16.3 million? Simple answer is you don’t. You don’t want to look back like Ian Desmond and Dexter Fowler did this season and realized by rejecting their qualifying offers in 2015, they each left $7 million on the table and still failed to come to a multi-year contract agreement for 2016.

I think Hellickson made the right move whereas I think Matt Klentak made the first minor gaffe of his GM career. They had the opportunity at the deadline to move him. They weren’t going to get a top-5 prospect, but I think a package of mid range prospects was definitely doable. Matt Klentak was on record saying they would need a package that would be greater than the value of the compensatory pick they would receive IF Jeremy Hellickson rejects the QO.

Teams are just not giving up a first round pick, while committing to multi-year deals for a 3rd or 4th starter anymore. With the Hellickson signing, the Phillies payroll commitments for the 2017 season sits at around $56 million. That includes the Hellickson deal, Howard buyout and Matt Harrison’s final year. Hellickson is just the 4th player to accept a qualifying offer of the 60+ offered since 2012.

Now having said all of that, I think this is the best thing that could have happened to the Phillies. What we get from Hellickson is a pitcher who really figured it out in 2016 after 3 disappointing seasons with Tampa Bay and Arizona. We get a guy who is entering his age 30-season and who has averaged 28 starts over the past 6 seasons. This was a win-win scenario and Hellickson gives the Phillies the trusted arm they need in a rotation that will have many questions marks going into the 2017 season.

Last Week, the Phillies traded Darin Ruf and Darnell Sweeney to the Los Angeles Dodgers for Howie Kendrick. Kendrick gives us the stability we need at the corner outfield position. The corner outfielders finished dead last in baseball with a .617 combined OPS and despite the Kendrick regression this season, he will be a vast improvement.

Yes, that does scare me a little bit, but after seeing what we gave up – Ruf and Sweeney – we couldn’t have asked for a more perfect deal. Ruf ran his course here in Philadelphia and will continue to crush left handed pitching. But, he is unreliable on the field and is pretty much just a utility/PH at this point. Sweeney is a self-proclaimed power-hitter with one of the longest swings I have ever seen. Sweeney came over to the Phillies from LA originally in a package deal for Chase Utley.

The winter meetings will be a true test of what direction the Phillies will be headed for 2017. Will they ship Ceasar Hernandez with J.P. Crawford knocking on the door? Will the Pat Neshek addition be the only boost they need in a bullpen that struggled mightily in August/September? What other upgrades can they make to the rotation? The Phils have an unlimited piggy bank again. How Klentak will manage that is the question on everyone’s mind.