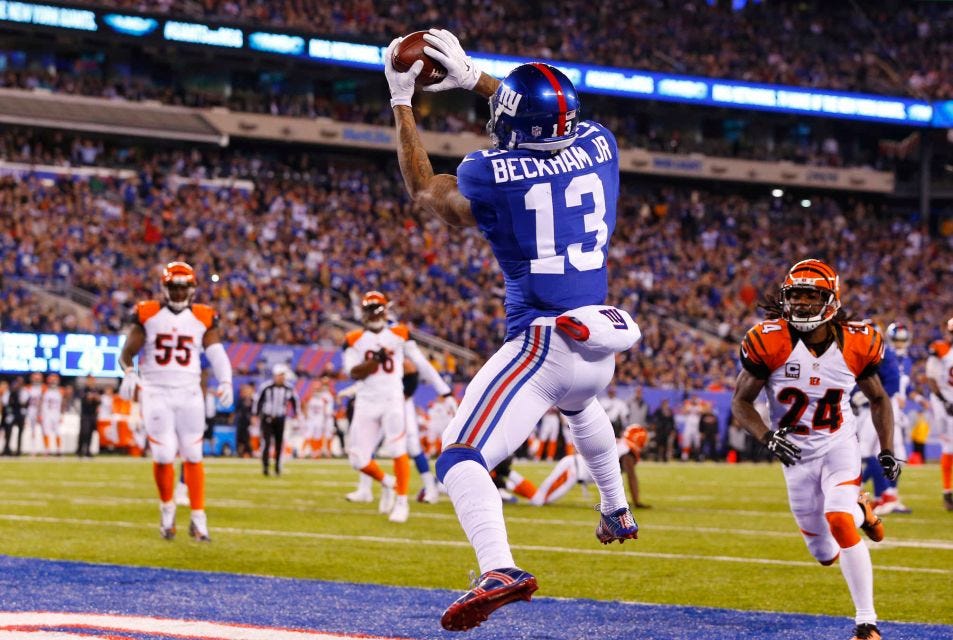 Listen, this is far from a perfect team. They’re far from firing on all cylinders on offense. Defense travels though. As long as you’ve got a D you’ve got a chance and there’s simply no questioning the Giants have exactly that. Outside of Cincy taking advantage of an Eifert mismatch early, Dalton & Co. couldn’t sustain a threat without a short field. If not for an Eli turnover or a monster kick return to start the second half, Big Blue’s dominant defensive performance would’ve shown on the scoreboard too.

They carved up the Bengals on the opening drive & it looked like tonight would be the night Eli & the offense carried the load. Cincinnati answered right back on the heels of that 71-yard Eiffert play to give the looks of a shootout. Besides that score though, AJ Green was largely obsolete. Only 68 yards on the night and most of his catches were meaningless. Cincy’s backs totaled just 63 yards on 22 totes.

Meanwhile Odell Beckham was Eli’s safety net. Plenty of important catches to keep drives alive along with this absolute dusting of Pacman Jones:

Credit to Big Balls McAdoo for going for it on 4th and goal down 6 in the second half. The Bengals had momentum after a 10-point 3rd quarter & a FG try there would’ve been a win for them. With the way Benny Mac’s defense was playing though there was little reason to believe Dalton could drive the ball for points starting inside his own 10. Calculated risk that ended up paying off with the game-winning score. Wasn’t the smoothest offensive output, but when they needed a play made they got it done – including Rashad Jennings running the game out with a couple big first downs.

Defense was the star though. Vernon (10 tackles & a sack) & JPP were animals all game long. It was frustrating to see so much pressure without anything to show for it, but when they needed it most the Giants defense delivered back-to-back sacks to stall the Bengals’ final drive. Landon Collins hauled in his 4th INT in his last three games & his teammates delivered a pair of big-time 3rd down stops by mere inches that might’ve been the difference. Can’t say enough about all these guys. Spags has toys and he’s learning how to use them better & better every week.

Four straight wins. 6-3 record in a conference with most teams hovering around .500 & the Bears/Browns up next on the schedule. We all expected the Giants to be better, but they’re looking more & more like a squad that can make a bit of noise come January. Offensively I keep waiting for an explosion & I still think it’s coming. Maybe I’m the idiot because they can’t run the ball & seemingly call the same 10 passing plays repeatedly – but they’ve simply gotta be better than this. Gotta figure out a way to lengthen drives & hang a few more points so the D can play a few second-half minutes without it being do-or-die.

Oh, and Roger Lewis stinks. Had to get that in here. Fuck #82 forever.