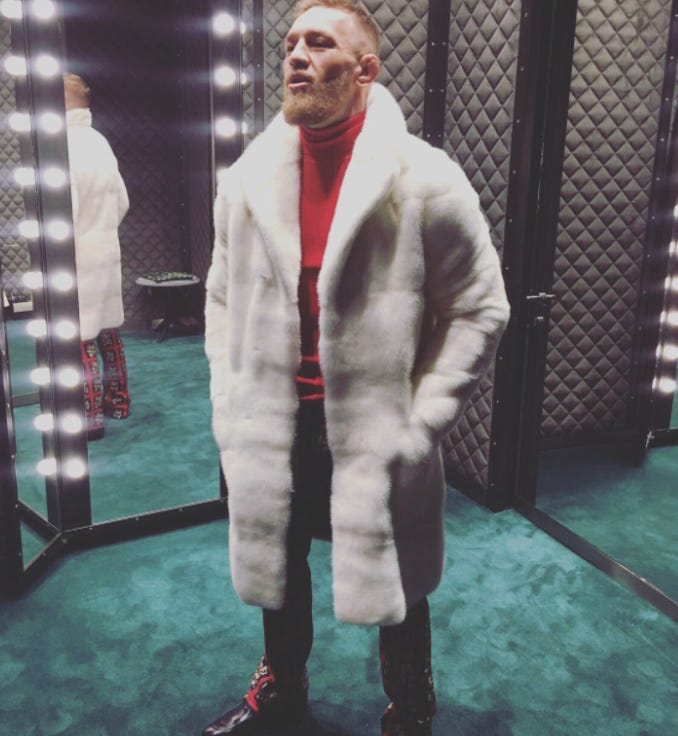 (Source) Conor McGregor said leading up to his showdown with Eddie Alvarez that he had a “big announcement” planned for after the fight. Many speculations were tossed around, but nobody thought of a fairly obvious one: money.

McGregor, after scoring yet another beautiful TKO at UFC 205 on Saturday, said afterward that he has spent enough time playing games, it’s time for the real money to come rolling in.

“If you want to come at me, if you want me to stick around and help service that debt and continue to push the company, bring me on board — for real,” McGregor said at the post-fight press conference. “I need to be set for life for this. If you want me to be truly on on board, then I need to be all-in on this proper, as an owner, and have an equity stake in the company. That’s what I’m looking for.”

That certainly sounds like a man ready to hold out for a bigger contract. As the biggest star in the sport — and maybe in all of sports — McGregor knows the value that brings to the table. Holding two belts at the same time doesn’t hurt either.

“They’ve got to come talk to me now,” McGregor said. “Both belts. Money. I want the ownership now. If we’re going to keep doing this, let’s talk, but I want an equal share. I want what I’ve deserved, what I’ve earned.”

I know there is no one fighter bigger than the UFC brand, especially with the lightning fast turnover the sport seems to have, but if there is one guy that could demand equity in a 4 billion dollar company and not seem totally insane it’s Conor McGregor. That’s the level he has reached. Everything he does is the definition of must watch. I know UFC 205 had a great card but I would guess they would have had half the amount of pay per view buys without McGregor on the card. And it’s not just fighting. After he beat Alvarez on Saturday night everyone stayed glued to the TV to watch what he was going to say. Every time he opens his mouth people listen, he’s reached that status as an athlete. I actually would go as far as to say he’s the biggest athlete at this moment in sports. He’s “Now” to quote an awful ESPN franchise. When could you ever say that about another UFC Fighter? Never right? So do I think the UFC would ever in a million years give him equity? Fuck no. But the discussion is an interesting one and Conor at least has a point, which is crazy in itself when you really think about it, that this demand is crazy but not so crazy you don’t at least pause for a second.

This is how you make sure the ladies don’t think you’re tied down. Such a vet move. 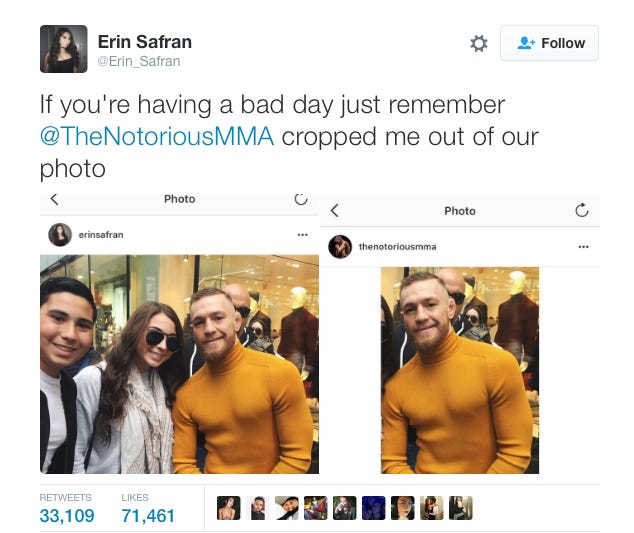